Israel’s latest diplomatic flap is with itself 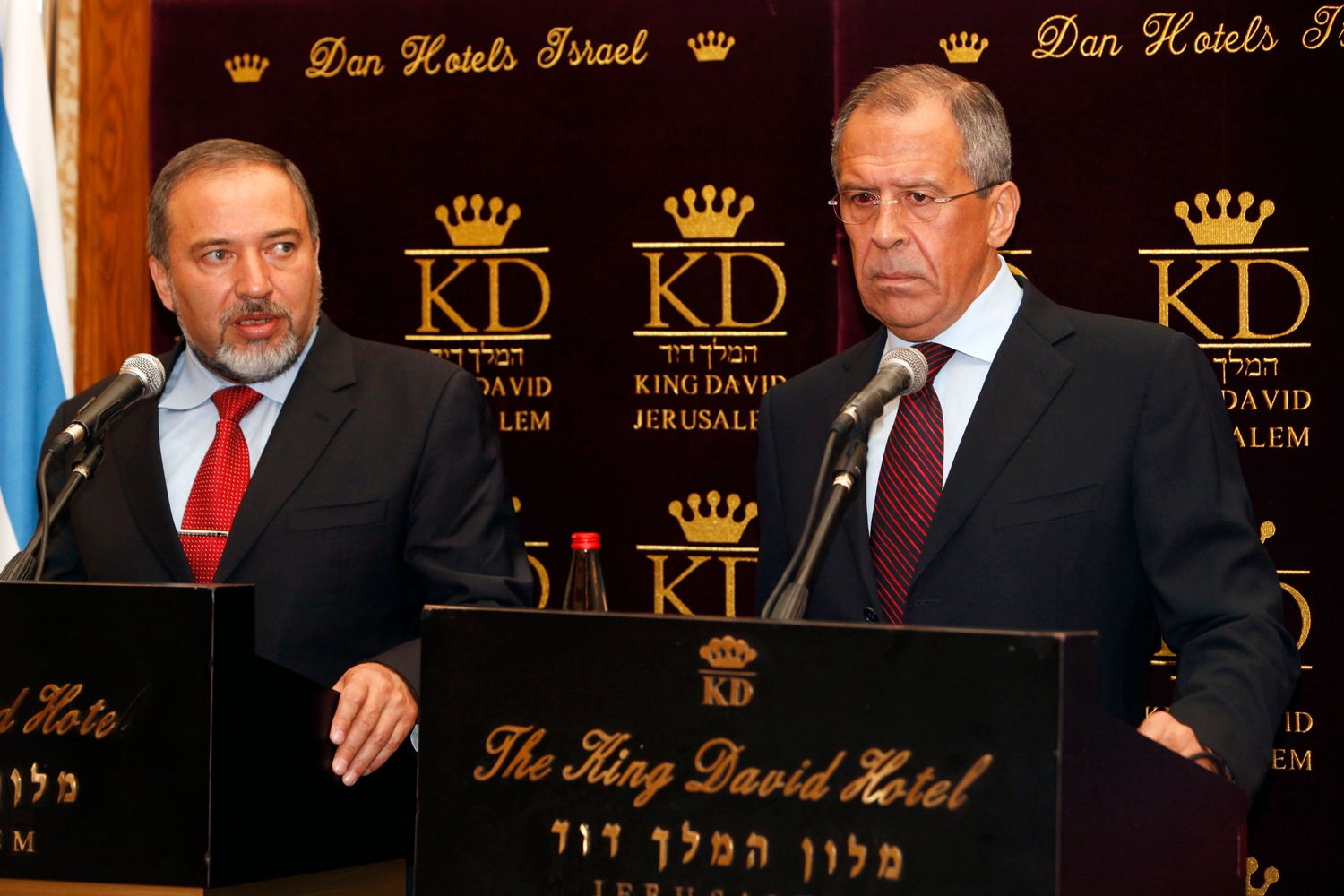 A labor dispute at Israel's Foreign Ministry nearly derailed a trip to Israel in June by Russian Foreign Minister Sergey Lavrov -- seen here at a news conference with Israeli counterpart Avigdor Leiberman -- when nobody came to pick Lavrov up from the airport. (Miriam Alster / Flash90)
Advertisement 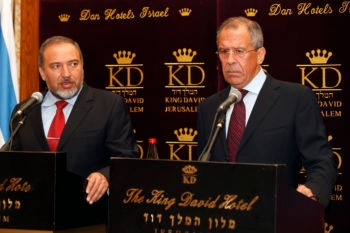 A labor dispute at Israel’s Foreign Ministry nearly derailed a trip to Israel in June by Russian Foreign Minister Sergey Lavrov, seen here at a news conference with Israeli counterpart Avigdor Leiberman, when nobody came to pick Lavrov up from the airport. (Miriam Alster / Flash90)

The foreign ministry in question? Israel’s own.

It’s all part of a labor dispute at the Israeli Foreign Ministry that threatens to harm Israel’s delicate diplomatic relationships, scuttle overseas trips by Prime Minister Benjamin Netanyahu — including this week’s to Washington — and bring Israel international embarrassment.

Only an 11th-hour appeal from Foreign Minister Avigdor Lieberman saved Netanyahu from suffering the consequences during his planned trip to Washington this week for a summit with President Obama and Palestinian Authority President Mahmoud Abbas. On Monday, Foreign Ministry workers on a work slowdown decided that they would, after all, handle Netanyahu’s visit to the U.S. capital.

“Given the importance of the occasion and our sense of national responsibility, we will probably allow our employees to provide all the necessary services,” Hanan Goder, chairman of the workers’ committee, told JTA.

Just a few days earlier the diplomats, already barely on speaking terms with the Prime Minister’s Office, the Treasury and the Mossad intelligence agency, threatened to suspend ties with the Israel Defense Forces.

It was just the latest salvo in a six-month pay dispute at the Foreign Ministry.

The threat against the IDF came after Netanyahu, fearing that he might be left in the lurch in Washington without any support staff, approached the IDF’s procurement division in D.C. for possible help with his visit. That led to an angry letter from the Foreign Ministry workers’ committee to IDF Chief of Staff Gabi Ashkenazi urging him not to allow the government to use the army as strike breakers. To do so “would violate democratic norms,” the strike leaders argued.

Eventually the Foreign Ministry staff agreed to serve Netanyahu during his visit while maintaining all other strike action.

The Foreign Ministry officials launched their work slowdown in February by withholding political estimates and position papers, as well as restricting contacts with the Prime Minister’s Office and the National Security Council. They also stopped sending diplomatic cables and providing logistics for visits by Israeli dignitaries abroad.

In June, staffers started coming to work in jeans and sandals rather than their regular business attire.

Things escalated a few weeks later with a string of diplomatic gaffes involving high-level foreign dignitaries. First, the Estonian president’s wife was left stranded at a restaurant outside Jerusalem when her Foreign Ministry driver disappeared. An irate President Toomas Hendrik Ilves retaliated by visiting Palestinian Authority President Mahmoud Abbas in Ramallah instead of laying a wreath at the Jerusalem tomb of Zionist founding father Theodor Herzl.

Similarly, a hired car had to be arranged when Bulgarian Foreign Minister Nikolay Mladenov was abandoned at the Yad Vashem Holocaust memorial and museum.

Worse, there was no full protocol reception or even a car for Russian Foreign Minister Sergei Lavrov when he arrived at Ben Gurion Airport in late June. The Russians nearly decided to cancel the visit, and Israeli Deputy Foreign Minister Danny Ayalon had to drive down in his own car to meet Lavrov at the airport.

Netanyahu has been in the thick of the labor dispute twice thus far.

During his July summit with Obama in Washington, Israeli diplomats suspended their slowdown in response to an appeal from Histadrut Trade Union boss Ofer Eini, who promised to take up their cause. But Eini has failed to deliver in negotiations.

Burned once, the diplomatic staff adamantly refused to provide the logistics for an ensuing Netanyahu trip, this time to Greece in mid-August. So the prime minister asked Mossad officials in Athens to take care of the arrangements, which they did.

“We took it very badly,” Goder said. “The last time a security organization was used to break a strike in Israel was with the big seaman’s strike in 1951.”

In retaliation, the Foreign Ministry threatened to withhold payment of expenses — like rent and children’s school fees — to Mossad officials working out of Israeli diplomatic missions abroad. At one point the ministry even considered withholding Mossad salaries, but relented for legal reasons.

More significantly, for the first time in Israel’s history, the Foreign Ministry severed routine contacts with the Mossad, although workers’ committee member Yaacov Livne assured JTA that behind the scenes, exchanges vital for state security are continuing.

Foreign Ministry employees allege that the Mossad agents who have been subverting their strike get paid twice as much as the ministry diplomats for doing exactly the same work, facing the same security dangers and serving in the same difficult postings. Goder says the salaries in the diplomatic corps are so low that when he showed Treasury officials the pay tables for Foreign Ministry employees, the Treasury officials thought he had made up the figures.

Goder says the strike action is causing enormous damage, especially at a time when efforts to delegitimize Israel are increasing. This is why, he said, he believes the strike eventually will succeed.

“Israel simply cannot afford to function without a foreign service,” he said.