With wineries and tourism, settlers try to rebrand settlements for Israeli public 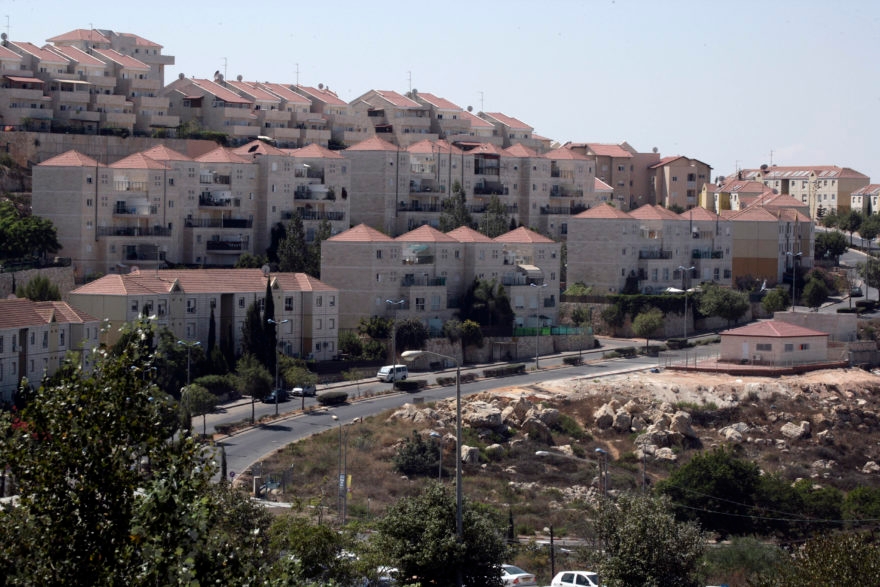 The city of Ariel, a Jewish settlement in the West Bank, is one of the stops on a tour that settler leaders have organized to change Israeli public opinion on the settlements. (Abir Sultan / Flash90 / JTA)

PSAGOT, West Bank (JTA) – Inside the cool of a cavernous wine cellar stacked high with oak barrels of Merlot and Cabernet Sauvignon, the tensions of the Israeli-Palestinian conflict seem to fade away even at this Jewish settlement in the heart of the West Bank.

This is precisely the message a stop at the Psagot Boutique Winery is meant to convey.

It’s part of a new strategy by settler leaders to "rebrand" settlements, offering tours of settlement communities in a bid to win over an Israeli public they fear may have abandoned them either through apathy or outright hostility.

"We have been feeling that enough is enough. Stop making us look like monsters," said Yigal Dilmoni, who directs the newly created information office for the Yesha Council, the settlers’ umbrella organization, which is organizing the tours.

"Most people don’t realize how regular our lives here are. People wake up in the morning, go to work and are not engaged in the world of politics," Dilmoni said.

The tours are meant to strike a stark contrast to what Dilmoni described as the common media image of settlers as violent radicals on the prowl for brawls with neighboring Palestinians.

For the Yesha Council, the significance of not having the Israeli public behind the settlement project hit home in wake of the 2005 Israeli withdrawal from the Gaza Strip, when some 8,000 Jewish settlers were evacuated, some forcibly. It was a traumatic episode for the settler movement — not only because of the evacuation, but also because there was no broad Israeli uproar against it.

It was a lesson, too, in the important role played by opinion makers — journalists, media personalities and business leaders — in shaping Israeli society’s views, settler leaders said. This is why the Yesha Council has decided to start bringing such opinion makers to settlements as the first phase of their attempt to improve their public standing.

Avri Gilad, a well-known Israel media personality, told listeners on a radio show the day after he returned from such a tour that it dramatically changed his view of the settlements.

"I went on a tour that revolutionized my awareness of settlements in Samaria,” he said on the show. “I visited places I was raised to detest. I returned in a state of confusion: confusion about the injustice done to citizens who were called on by the state to settle, given building permits and then frozen out. I was surprised to meet people with whom I had a lot to talk about, with great warmth and intimacy."

An earlier public relations strategy, an ambitious project of billboards and advertisements briefly launched in 2008 under the slogan "Judea and Samaria, The Story of Every Jew," proved successful but too expensive to maintain over the long term, Dilmoni said.

Dilmoni, 40, an earnest and energetic geographer and urban planner by training, believes that no one comes away unmoved from seeing the settler enterprise up close, even if their political opinions remain unchanged.

About 320,000 Israeli Jews live in the West Bank. They believe the land is their biblical birthright, and successive Israeli governments have supported that notion. But the land also is territory that Palestinians claim as their future state.

The settlements, viewed as illegal by much of the international community and a threat to the country’s long-term survival by critics inside Israel, have become one of the major issues of contention in the Israeli-Palestinian conflict.

They also threaten to derail the recently relaunched direct peace talks between the two sides. Palestinian Authority President Mahmoud Abbas has declared that he’d pull out of the talks if Israel did not extend a 10-month freeze on construction in settlements that is set to expire Sept. 26.

The message of the tours, Dilmoni said while driving visitors along a stretch of highway that cut through a valley surrounded by ancient terraced hilltops, is "Come here and see what has been built here and then decide what to think."

The settlement tours constitute a packed day. They begin early in the morning, end at sunset, and include stops and conversations at a range of settlements — large and more urban ones like Ariel, and smaller ones like Kida, which have sweeping views of the desert unfolding into Jordan. They end with a return to the Israeli side of the Green Line — the pre-1967 border between Israel and Jordan that demarcates the West Bank.

In the past, when settlers gave tours of Judea and Samaria — the biblical name for the West Bank — the focus was on security and the role of their homes as strategic buffers because they sit on the mountain range overlooking the Mediterranean coastal strip to the west and Jordan to the east.

Now a "softer,” more human-interest spotlight has been purposefully chosen, one in which visitors can do a wine tasting at the winery in Psagot, part of a new multimillion-dollar visitors’ center for the Binyamin region that is set to open over the Sukkot holiday.

During a visit there last week, workers were rushing to finish building a room that will house more than a dozen touch-screen computer terminals offering information about the area. The center is a sleek new complex that also boasts event space and a small movie theater with plush orange seats that will show a short feature film about a young man who, on the verge of leaving the country for a job in London, "returns to his roots" to tend land on a settlement.

The itinerary for the settlement tours also includes home visits. At the edge of the settlement of Eli, home to 700 families, a woman named Eliana Passentin, 36, stands in her backyard overlooking an expanse of sloping terraced hillsides and speaks of her passion for living alongside the history of the Bible.

Explaining the view, she points out an Arab village whose name in mentioned in the Bible for producing especially fine wine. She also points to the ancient site of Shiloh, where the Ark of the Covenant was once housed, providing the central site for Israelite worship for 400 years.

Passentin describes how her home, located in a neighborhood the Israeli Supreme Court recently ruled was built illegally and has ordered to be razed, was built with the area’s history in mind.

"The dining room windows look out onto Shiloh," she said, "and from the living room we can see the site of Judah Macabee’s first and then final battle.”