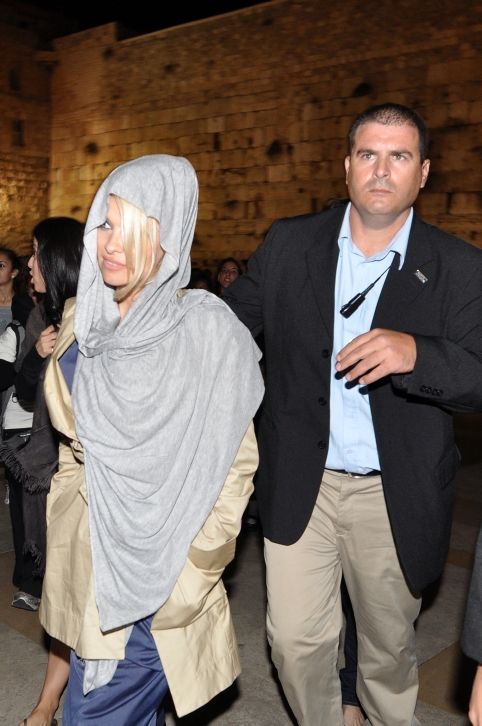 Pamela Anderson, in Israel to promote her anti-fur campaign and to guest judge on the Israeli version of "Dancing With The Stars," visiting the Western Wall in Jerusalem, Nov. 7, 2010. (Flash 90)
Advertisement

JERUSALEM (JTA) — Here are some recent stories from Israel that you may have missed:

Few luxury cars come with an anti-grenade defense system or bulletproof tires, nor other serious security features such as a bulletproof armored cabin and an automated fire extinguishing system.

Prime Minister Benjamin Netanyahu’s new official car, an Audi A8, has all of them, plus one more thing: a $1 million price tag.

The car also has a wide-screen DVD screen, a  refrigerator and a humidor for cigars, according to reports, plus more mundane luxury items like a sun roof and leather interior.

Its 12-cylinder, 6-liter engine, with 450 horsepower, is the largest made by Audi for the A8. The car weighs in at nearly three tons.

Two more of the cars have been ordered to round out the prime minister’s convoy.

Israel’s “Dancing with the Stars” is kicking up its heels for a fifth season with same-sex partners for the first time.

Television sportscaster Gili Shem Tov, a lesbian married to a woman with whom she has a son, is paired with professional dancer Dorit Milman, who wasn’t aware that she had a female partner until Shem Tov walked into the studio for their first meeting.

“Because I share my life with a woman and have a family with her, to me this is the most natural thing to do,” Shem Tov said during the introductory show last week.

“Dancing with the Stars,” based on the British “Strictly Come Dancing” show, is the first of 35 versions broadcast in countries around the world to have same-sex partners.

So who will lead? The women said on the first show that they would take turns.

Anderson has asked Israeli politicians to support a bill that would ban the use of animal fur to make clothing in Israel. The bill has angered the haredi Orthodox parties, since many of their adherents wear the streimel, a sable-trimmed hat.

Anderson has called on the politicians to view a graphic People for the Ethical Treatment of Animals video.

And the winning numbers are …

A 10,000-to-1 event that occurred twice in one month has put some big bucks in the bank accounts of three Israelis, plus a bit of extra cash in the pockets of a handful of others.

The six main numbers hit twice in Israel’s state lottery in less than a month; the seventh strong number was different, however.

Three players guessed the seven numbers correctly and each won more than $1 million. Some 95 others played the six base winning numbers in the second drawing, according to reports, each winning $1,116 to $1,831.

Hosts Jeremy Clarkson, Richard Hammond and James May arrived recently from Iraq via Jordan driving a camouflage-colored car and another with a  water pipe attached to the door. Paparazzi chased them through the hills on the outskirts of Jerusalem. The show also reportedly filmed in Nazareth and the Golan Heights.

No one is saying whether the hosts managed to wreck a car, as they are fond of doing, during their visit to the land of aggressive drivers.

The episode is set to be aired during the next season. “Top Gear” has hundreds of millions of viewers worldwide.

Some of the diamonds, stolen by a worker from a diamond factory in Antwerp, were sold on the black market. A pickpocket in Paris ripped off the others from the thief.

Earlier this year, a shipment of diamonds sent from Israel to New York turned out to be part of the stolen Antwerp diamonds.

Based on the information from New York, Israeli police were able to track down the member of the diamond exchange who sent the diamonds. In his home they found several more of the stolen diamonds, as well as documentation of the sale of some of the other stolen jewels.

For your eyes only

James Bond may be on his way to Israel after Israel and Britain signed an agreement to cooperate on filmmaking.

The deal, which makes Israel a preferred filming location for British films, also will give British production companies financial incentives and tax benefits from the state to shoot in Israel, Ynet reported.

Parts of the next Bond movie reportedly may be filmed in Israel. In addition, British filmmakers are considering producing two films about the British Mandate period in Israel, according to Ynet.

The pot is on the government

A Health Ministry committee has recommended that medical marijuana be included in the country’s national health basket.

The committee cited the steep increase in the price of medical marijuana that unchecked could rise further if it does not join the list of included medicines.

About 5,000 prescriptions for marijuana are expected to be written during 2010, according to Haaretz. The number of patients using medical marijuana could rise to 50,000 if the committee’s recommendations are accepted.

A physics student here may have created the world’s smallest marriage proposal — and he wants it documented as a record.

Elad Dekel, 25, who attends the Israel Institute of Technology, is trying to get his proposal, written on the back of a one-square-centimeter, gold-coated silicone chip, included in the Guinness Book of Records as the smallest marriage proposal in the world.

Created at a nanotechnology research center in Dresden, Germany, where Dekel went as part of an exchange program, the proposal was in Hebrew and German, and included a picture of the couple, Ynet reported.

Dekel showed his girlfriend, Chen Mendelowitz, the proposal under a microscope when she came to Dresden for a visit.

The milk of human kindness? Not here.

Fake posters listing the dangers of milk consumption bearing the logo of Israel’s Health Ministry  were hung in cities throughout Israel, including outside of a child’s day care in Tel Aviv.

Who put up the posters is a mystery; the Health Ministry wants the police to look into the matter.