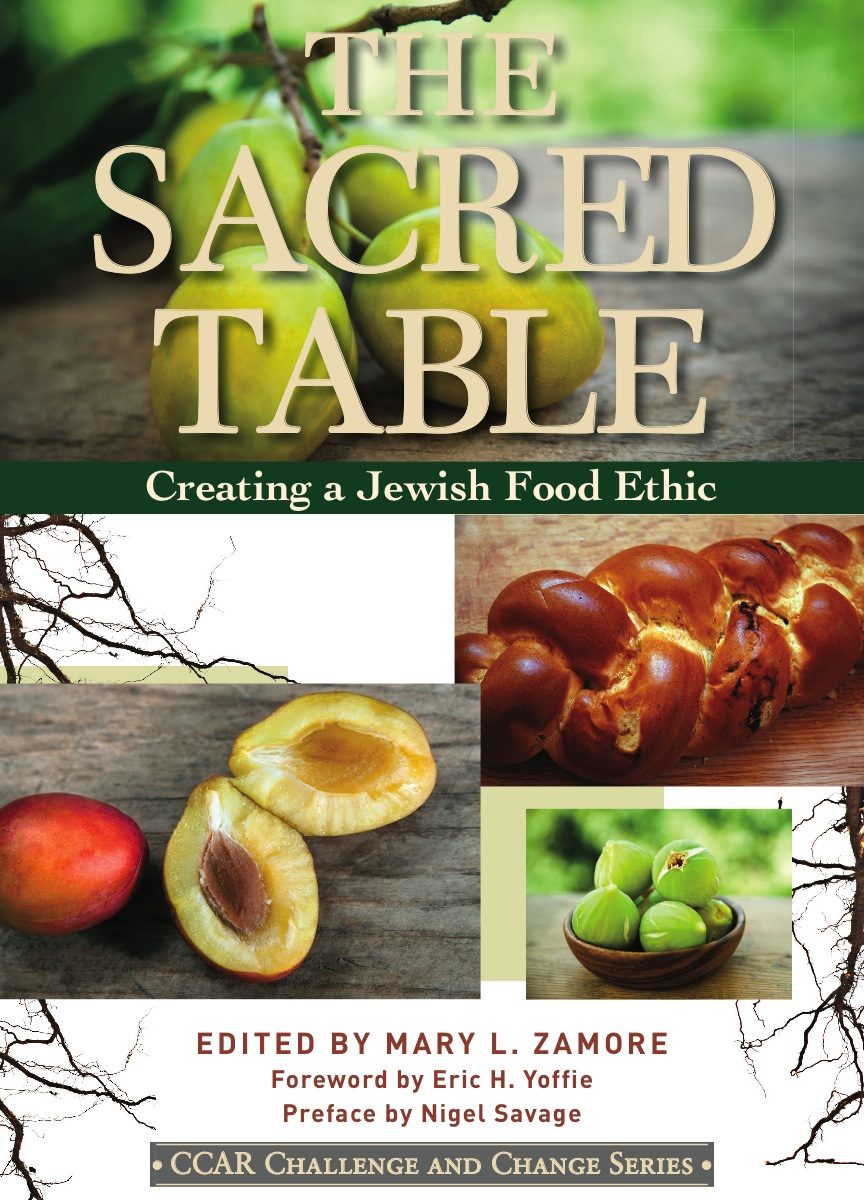 SAN FRANCISCO (JTA) — Kosher — it’s the first word in the book. And tackling the “k” word head-on is part of what makes the first Reform guide to Jewish dietary practice so significant.

“The Sacred Table: Creating a Jewish Food Ethic,” to be published next month by the Reform rabbinical association, uses an array of essays by Reform rabbis and activists to challenge Reform Jews to develop a conscious dietary practice grounded in Jewish values.

And it’s not shy about suggesting kashrut, both traditional and re-imagined.

“No longer an oxymoron, ‘Reform kashrut’ has entered the Jewish lexicon, although there is no consensus on what this means exactly,” Rabbi Carole Balin, a Jewish history professor at Hebrew Union College-Jewish Institute of Religion, writes in the book, which is being published by CCAR Press.

For a movement whose founding Pittsburgh Platform of 1885 rejected kosher laws along with other traditional Jewish rituals of dress and body as “entirely foreign” to modern sensibilities, the book represents a significant milestone in the development of Reform spirituality and practice.

It also illustrates the increased attention focused on kashrut across the denominational spectrum since the 2008 Agriprocessors scandal, which shuttered the nation’s largest kosher slaughterhouse and spurred a rash of “ethical kosher” initiatives — from small, humane kosher meat operations to the Conservative movement’s Magen Tzedek project, which certifies kosher food products that meet certain ethical standards.

In Reform circles over the past two years, conversation about kashrut and Jewish values has come from the grass roots, youth groups and the pulpit. It’s part of the movement’s new readiness to examine once-discarded Jewish rituals for their spiritual potential, and the focus on kashrut comes within the context of heightened interest among Americans generally in the politics and morality of food production and distribution.

Some Reform leaders, including the book’s editor, Rabbi Mary Zamore of Temple B’nai Or in Morristown, N.J., want to play down the trendiness aspect.

“This is part of a continuum within Reform Judaism,” said Zamore, who pushed the project along for 13 years. “It’s not liberal Judaism becoming something different; it’s that we continue to evolve. Here is a topic which for many Reform Jews was taboo or a non-starter. Now everywhere I go, people are talking about these topics as Reform Jews.”

“The Sacred Table” opens with a discussion of the historical Reform approach to kashrut and includes an overview of traditional kosher laws — a first for an official Reform publication, according to Zamore.

It also includes chapters on each of the Jewish values that proponents of ethical kashrut embrace as they seek to broaden the traditional definition of the Jewish diet, from the ban on “tzaar baalei chayim,” or cruelty to animals, to preventing “oshek,” or oppression of workers. It includes the results of a 2005 survey that showed increasing numbers of Reform synagogues, clergy and lay leaders are keeping kosher, partially or entirely. And it ends with a guide that Reform congregations can use to develop their own communal dietary practice, which may or may not include kashrut.

Rabbi Eric Yoffie, president of the Union for Reform Judaism and a longtime advocate of bringing more Jewish ritual into Reform practice, says he was pleasantly surprised to see the book’s forthright approach.

In the summer of 2009, while putting together his keynote speech for the movement’s biennial conference, Yoffie said he planned to suggest kashrut as a model for Reform dietary practice. But after running his speech by key Reform lay leaders, the rabbi told JTA, he heard so much pushback that he dropped the “k” word from the final initiative.

Yoffie later told JTA that he “wanted people to be open to the idea of Jewish sacred eating, and didn’t want to touch an emotional chord that would prevent them from hearing that message.”

Now, a year later, he says he finds it “fascinating” that the Reform rabbinical leadership has seized the reins.

“Our rabbinical body is coming out and unabashedly embracing the word kashrut, saying this is how we’re framing the discussion and we want people to struggle with it,” Yoffie said.

The thrust of the book clearly favors broadening the definition of kashrut to include related Jewish ethical values, in keeping with longstanding Reform history.

“That is essential,” Yoffie said. “There are those in our movement who will accept kashrut in the traditional sense, but the great majority will take elements of kashrut in a broader sense. They want to relate it to issues of ethics, community and identity.”

Still, kashrut itself is offered as a recommended practice, however adapted. That does not sit well with some Reform leaders, whose voices also appear in the book, however briefly.

One is Rabbi Joel Abraham of Temple Sholom in Scotch Plains, N.J., who writes that he does not keep kosher, opposing its power to separate Jews from non-Jews. He explains his position as a “moral choice based on my definition of Reform Judaism,” and says he feels marginalized at Reform events that serve only kosher food. They may think they’re being inclusive, Abraham writes, but in fact such meals exclude him and his beliefs.

Jewish ethical values about treating workers and animals well, and respecting the environment and one’s own body, are all important to Reform as well as other Jews, he says.

“But we don’t need to graft them onto kashrut,” he said, acknowledging however that he is in a shrinking minority among Reform rabbis.

Balin, who teaches a course on food for rabbinic and cantorial students, says she doesn’t know any who adhere to the tenets of Classical Reform.

Jewish dietary practice and the politics and morality of food choices, she said, “are very much on the minds of these future Reform leaders.”