Finding the aahs and oys of Jewish toys 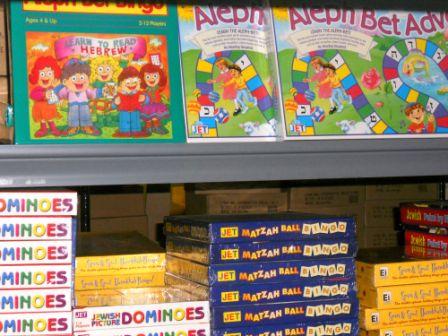 Some of the Chanukah inventory in the OyToy warehouse in Atlanta. New manufacturers have been expanding the number of offerings in the the Jewish toy market. (Photo courtesy of OyToys)
Advertisement

A new market of holiday offerings is featuring Jewish toys that flash, spin and challenge — including No Limit Texas Dreidel, a poker version of the classic top game. There’s even something for the family pet.

With new Jewish designs from niche and mainstream manufacturers, finding something your kids will want won’t be a stretch. Or if it is, at least it’ll be a wearable one.

“We expect Chanukah silly bands to sell a ton,” says Laurie Glusman, founder of the OyToys cyber store, of the Chanukah-themed variation on the fad elastic wristbands being worn by American schoolchildren.

The bands, which feature shapes like the outline of a menorah, Maccabee or dreidel, come in packs of 18 and sell for $3.99.

“My three kids come home from school wearing the regular ones,” says Glusman, who runs her 6-year-old business out of Atlanta. “It’s great they now have Jewish ones to trade and wear.”

The bands are part of an inventory of children’s toys, games, puzzles and craft sets with a Jewish theme that Glusman says has been growing since OyToys.com has been in business.

Among the new offerings, the oldest Chanukah toy, the dreidel, is still a “huge seller,” she says. No Limit Texas Dreidel is a distant cousin of the earliest humble versions that were made out of lead.

Will kids test the table limit on gelt?

The Texas version combines the dreidel game with poker, offering kids 9 and older the opportunity to “check, bet, raise or fold depending on the strength of your dreidel hand or how much you like to bluff,” according to the online catalog.

Other updated dreidels include a pair of Dueling Bouncing Light Up Dreidels, as well as a Techno Dreidel with Light and Sound.

After surveying the new offerings at this year’s wholesale toy shows, Glusman sees a return to “standard popular items” and expects “board games, dreidels and card games like Chanukah Go Fish to sell well this year.”

Trending this year are also Jewish toys for the family dog. OyToys sells a blue plush toy bone marked “kosher” and a plush ant marked “shpilkes,” among others.

Jewish toys are a niche product category that has long been dominated by small, sometimes traditionally oriented companies like JET, Jewish Educational Toys of Chicago.

JET produces board games with halachically wholesome content and imagery that until recently usually sold in Jewish bookstores an aisle or two away from the seforim. Now you can buy one of its popular games, Kosherland, which is inspired by Candyland, at Moderntribe.com. Even Urban Outfitters had it a few years ago.

JET, also drawing from the shelf of popular American word games, produces Jewish and Junior Jewish editions of Apples to Apples, that “game of hilarious comparisons.”

Until recently these companies have had little competition from larger American toy companies. But since 2004, the year Glusman opened her business, “The number of products have increased dramatically,” she said.

During that time, the mainstream toy manufacturer Melissa and Doug, already known to parents for its sturdy line of wooden activity toys, entered the Jewish toy market with several peg Jewish holiday puzzles.

Looney Labs, publisher of Fluxx, the card game “of ever-changing rules” also has entered the Jewish market with an expansion pack with “Jewish themes of the Torah and Shabbat.” Included is a “New Rule” card with a “Judaic bonus”: “If you’re wearing a Magen David or a Chai, you may play an extra card on your turn.”

Magnetic Poetry, whose products cover refrigerator doors from Los Angeles to New York, is offering a Yiddish version of its popular line that comes with the shpiel “words that will make your bubbe kvell.”

Perhaps the most famous dive into the Jewish toy box was in 2009 when American Girl, which is owned by Mattel, debuted the Russian-Jewish girl doll Rebecca Rubin.

The doll continues to attract seasonal attention with the addition of a Chanukah-themed outfit, a purple jacquard-striped dress with white stockings and shoes, and an accessory set that comes with a menorah, candles, dreidel and gelt.

Soon after the launch, however, American Girl discovered that its entrance into the Chanukah toy market would not come without a bit of tzuris. According to the Product Reviews on the American Girl website, the outfits were “way too snug” and were difficult for child or adult to put on.

Not to worry; Rebecca hadn’t eaten too many latkes.

An American Girl spokeswoman, Susan Jevens, acknowledged in an e-mail the “fit issues” with the popular doll in its first production run, “but they have been resolved.”

Glusman, who is also a child psychologist, says Jewish toys can help parents relate the Chanukah story to their children.

“It’s a way of parents and grandparents to share their knowledge,” she says.

Glusman adds that for households in which one of the parents is not Jewish, “toys are a non-threatening way to introduce understanding of Judaism.”

(Edmon J. Rodman, a JTA columnist who writes on Jewish life from Los Angeles, designed Jewish Holidays Building Blocks. He can be reached at edmojace@gmail.com.)