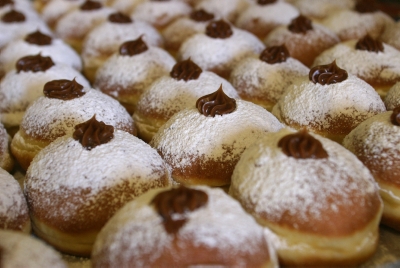 Sufganiyot, like those seen here, have been on the mitzvah menu for Elie Klein of Beit Shemesh in raising thousands of dollars for charity. (Flash 90)
Advertisement

It’s hard to hate Elie Klein of Beit Shemesh, even though he’s been chowin’ down on sufganiyot without gaining a pound.

As of Sunday,  the still-slender Klein, 30, has raised more than $4,000 for three dozen charities just for eating the Israeli doughnuts — 39 of them.

Via his Facebook page, Klein has asked family and friends in Israel and abroad to donate a certain amount per sufganiya he munches. He has raised more than $100 per puffy fried confection for 37 causes.

The gorging mitzvah grew out of a friendly rivalry among several friends to see who could eat the most sufganiyot, a traditional Chanukah food. The sponsors decide where the pledges go.

Klein, who had a doctor check him out before starting the sufganiyot marathon, told The Jerusalem Post that he’s been balancing his goodies by having plenty of salad. He told Ynet that he is “blessed with a crazy metabolism” and has not gained any weight yet as a result of his binging.

Memo to Israeli women: If you claim to be religious to avoid army service, don’t update your Facebook status on Shabbat. And don’t post photos of yourself in immodest clothing.

The Israel Defense Forces is using the social networking site to help catch draft-dodging women and reportedly has nabbed 1,000.

Military investigators looking for women who lied about being religious to evade mandatory army service have found young ladies posting photos of themselves in immodest clothing, dining in non-kosher restaurants and responding to invitations to parties taking place on Friday night.

Some 42 percent of Jewish women in Israel do not serve in the army — 35 percent of them signed a declaration that they are religiously observant. The army has 60 days to challenge the declaration, according to The Jerusalem Post.

Israelis will soon see electric cars on its roads, imported to test battery recharging stations at several sites throughout the country.

Better Place, a company based in California and Israel, was granted permission by the Minister of Transportation to import 13 Renault Fluence electric cars to test the  stations. The cars are set to be approved soon for marketing in Israel for 2011, the Israeli business daily Globes reported, making Israel one of the first markets for vehicles with a quick-change station, where the vehicles can pick up a freshly charged battery for immediate use.

More than 10,000 hybrid electric cars are now in use in Israel, according to reports.

One of the sexiest men alive, at least for the year 2010, lives in Israel.

Israeli paranormalist Lior Suchard was named to People magazine’s Sexiest Man Alive list for 2010 representing his age group, 28, on the Sexy at Every Age list of 100 men.

“I still can’t believe that I’m on the list; I’m in shock,” Suchard, who is currently performing his Uri Geller-esque act in Las Vegas, told Ynet. “I got all sorts of text messages from people telling me that I’m in the magazine, so I immediately ran to the store to buy it.

“On the one hand I’m a little embarrassed, but on the other hand this is very exciting. It was never my goal to be on it, but it is definitely cool to be included in the distinguished list.”

“Ramzor,” an Israeli sitcom about three longtime friends and their romantic relationships, won the International Emmy Award for best comedy.

The Emmy was awarded Nov. 22 in New York at an International Academy of Television Arts and Sciences ceremony.

“Ramzor,” which means “traffic light” in Hebrew, defeated entries from Thailand, Mexico and Britain. It was selected as a finalist by a panel of 700 judges from 50 countries.

Earlier this year, the Fox network bought the rights to the show, which is being called “Mixed Signals” and is scheduled to air starting in February. The American version will be written by Bob Fischer, who wrote the Fox TV series “Married with Children” and the film “Wedding Crashers.”

Russia also has purchased rights to the show.

The Hebrew version will be aired in several other countries, including Azerbaijan, Armenia, Belarus, Kazakhstan, Ukraine and Georgia, Ynet reported.

“Ramzor,” which airs on Israel Channel 2 and is owned by its franchisee Keshet, is taping its third season. Its second season was among the top 10 most watched shows of 2009, with 23.7 percent of Israelis watching.

‘Sex and the City,’ Israeli style

Casting has begun for an Israeli version of the hit HBO series “Sex and The City,” Ynet reported. The series will follow the lives and loves of three 30-something gal pals. The four American women lived in New York; the three Israelis will reside in Tel Aviv.

Ynet reported that young Israeli actress Neta Plotnik has been tapped to play the Carrie Bradshaw character made famous by Sarah Jessica Parker, a Jewish actress.

Two episodes will be filmed as the Globus Corp., which is producing the series, searches for a broadcasting contract.

On the Oscar shortlist

The Israeli documentary film “Precious Life” has been shortlisted for an Oscar.

“Precious Life,” the story of a very sick Palestinian child in Gaza and his mother’s efforts to get him the care in Israel that he needs to survive, is up against 14 films for one of five spots to vie for the Best Documentary Film award at the 83rd Academy Awards in March.

The film by award-winning Israeli TV reporter Shlomi Eldar, who is making his documentary directorial debut, has been screened at festivals around the world in recent months.