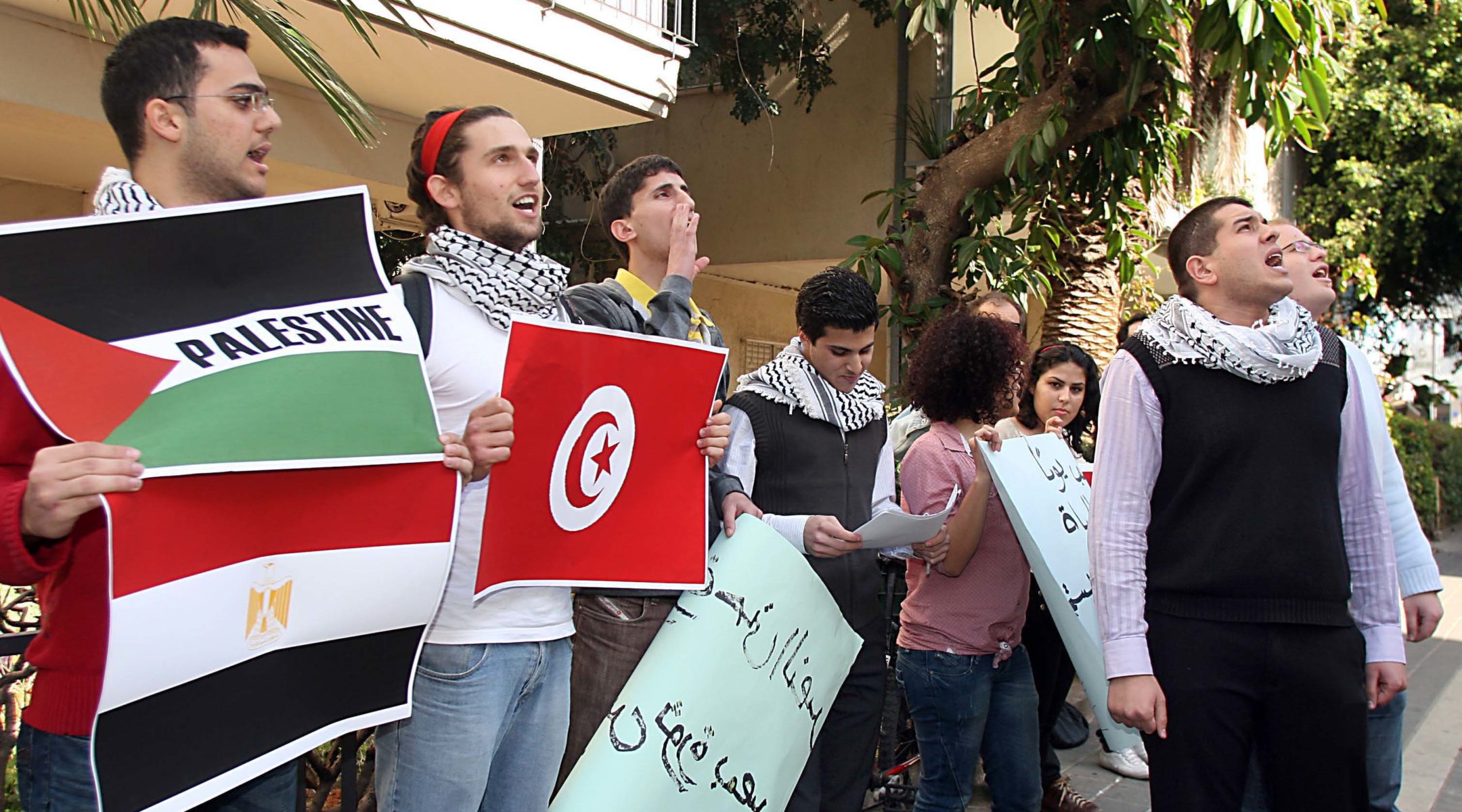 Arabs and Jews demonstrating in front of the Egyptian embassy in Tel Aviv against the regime of Egyptian President Hosni Mubarak, Jan. 28, 2011. (Gideon Markowicz/Flash 90)
Advertisement

JERUSALEM (JTA) — Israel is “anxiously monitoring” developments in Egypt throughout the region, Prime Minister Benjamin Netanyahu said in his first official comments on the situation.

Netanyahu told his Cabinet on Sunday that he had spoken the previous night with President Obama and U.S. Secretary of State Hillary Rodham Clinton, and held consultations with Israeli Defense Minister Ehud Barak and Foreign Minister Avigdor Liberman, as well as with Israeli intelligence officials.

“Our efforts are designed to continue and maintain stability and security in our region,” Netanyahu said. “I remind you that the peace between Israel and Egypt has endured for over three decades, and our goal is to ensure that these relations continue.”

Israel on Saturday evacuated the families of its diplomats stationed in Egypt, though its diplomats remained, as well as other Israelis wishing to leave Egypt.

On Sunday, the United States announced that it would begin evacuating its citizens from the country, offering voluntary flights to Europe beginning Monday. Turkey reportedly sent two planes to Egypt to evacuate its citizens. Reportedly there are thousands of Americans in Egypt.

Egyptian troops on the same day began to enter the resort town of Sharm El Sheik, according to Al Jazeera. The peace treaty signed between Israel and Egypt restricts the movement of Egyptian troops into the Sinai Peninsula, but Israel approved the entrance of troops, according to The New York Times.

As many as 100 people have been killed in the violence and more than 3,000 arrested.

Also Sunday, the Egyptian government shut down the local operations of Al Jazeera, which has been blamed for the current violence, according to reports.

Egyptian President Hosni Mubarak on Saturday named a vice president for the first time in his 30-year rule — Omar Suleiman, the Egyptian chief of intelligence — hoping to placate protesters calling for his ouster. It had been widely expected that Mubarak’s son, Gamal, would take over power when the time came. Mubarak also dismissed his cabinet and named replacements.

On Sunday, more than 20,000 protesters gathered at Cairo square for a sixth day of protesting.

Reports indicate that there has been some looting and that two mummies were vandalized at Egypt’s national museum. Prisoners reportedly have escaped, including one Gaza man who was able to return home, according to reports.