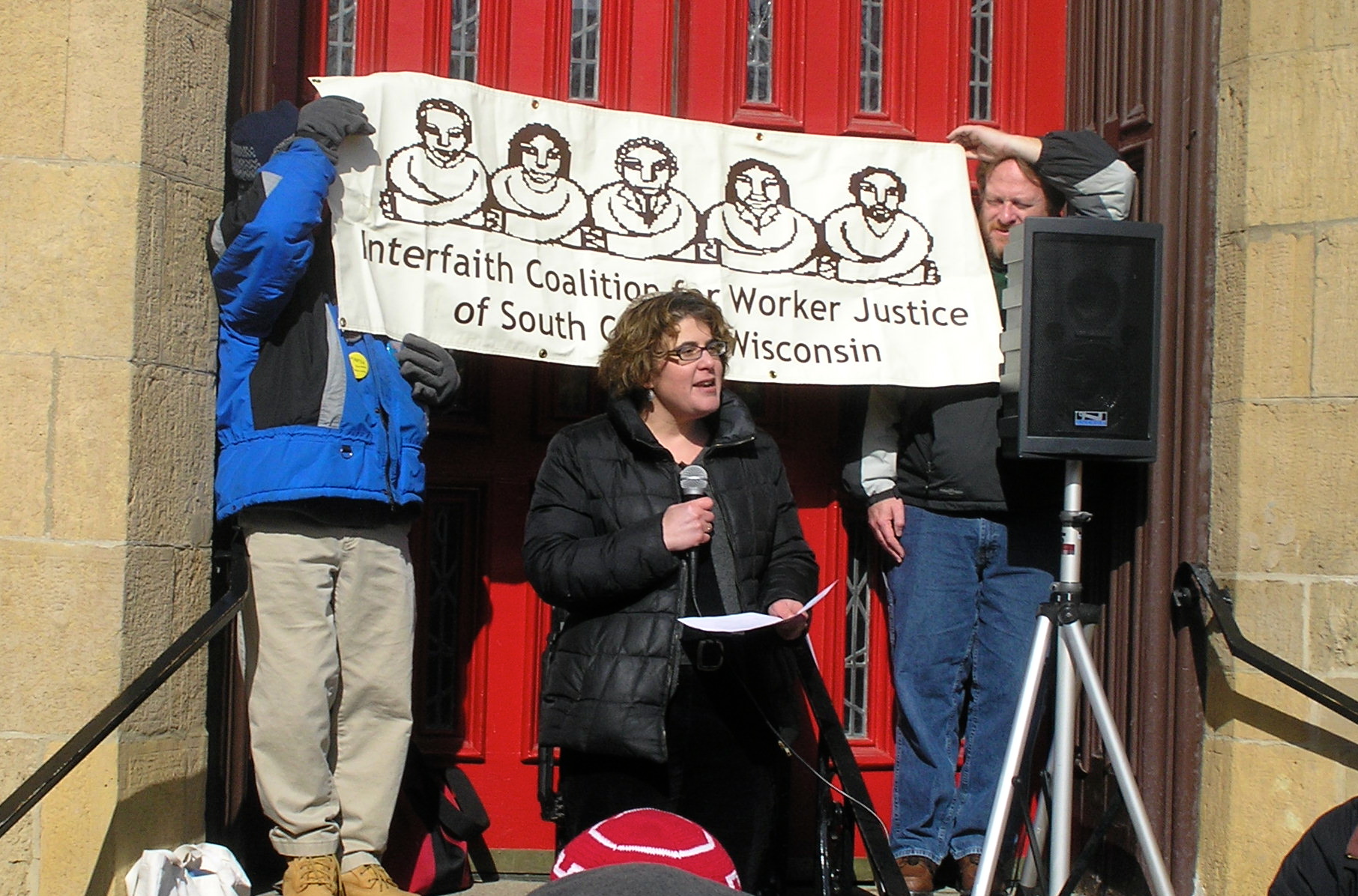 SAN FRANCISCO (JTA) – A growing number of Jews in Wisconsin are joining the protests in Madison against a budget-cutting proposal by the governor to eliminate most collective-bargaining rights for public-sector employees.

“Judaism has long stood for the rights of the worker, beginning with the biblical injunction of Deuteronomy: ‘Do not take advantage of the hired worker who is poor and needy,’ ” said Rabbi Bonnie Margulis.

Margulis joined two other Madison rabbis on Tuesday at a news conference at the state capitol building organized by the Interfaith Coalition for Worker Justice to protest Gov. Scott Walker’s proposal.

This is the second week of protests against the bill, which prompted the 14 Democrats in the state Senate to flee the state on Feb. 16, two days after the bill was introduced. Under Wisconsin legislative procedure, their continued absence effectively blocks any vote on the matter in the Republican-controlled state Senate.

Rabbi Bruce Elder of Glencoe, Ill., was one of two clergy members to offer the Wisconsin Democrats sanctuary, via an initiative of Interfaith Worker Justice. He said he has not heard back from the legislators.

“We don’t know where they are, but we assume they are OK,” he wrote in an email. “Our offers of sanctuary remain open and standing.”

In a “fireside chat” Tuesday night, Walker, a Republican, defended his proposal, saying it has nothing to do with curtailing workers’ rights. “The legislation I’ve put forward is about one thing,” he said. “It’s about balancing our budget now and in the future.”

Some Wisconsin rabbis and Jewish rights groups disagree, saying the proposal is an attempt to break the unions, who have agreed to take an 8 percent pay cut but refuse to give up their bargaining power. Similar battles between unions and state government have spread to Ohio and Indiana.

Rabbi Jonathan Biatch of Madison’s Temple Beth El, who is Margulis’ husband, told JTA this is “absolutely” a Jewish issue.

“For years in America, the Jewish community has supported workers’ right to organize, to bargain collectively, and for other purposes,” he said. “These rights are now in danger in Wisconsin because of Gov. Walker’s proposal to eliminate collective-bargaining agreements with public sector employees.”

Arguments have focused on the effect Walker’s proposal will have on teachers, but it also would impact sanitation workers, bus drivers and other municipal and state workers, Biatch and Margulis said. Police, firefighters and other public safety employees are exempt.

Rabbi Renee Bauer, director of the Interfaith Coalition, says Madison’s Reconstructionist and Jewish Renewal congregation, Shaarei Shamayim, is drafting a letter opposing the governor’s bill and hopes to get the city’s three other congregations to sign on.

The Jewish federations of Madison and Milwaukee have decided not to take a position on the issue.

“It’s really due to the diversity of our donor base,” said Jill Hagler, executive director of the Madison federation. “This is a very important issue, and we have a number of diverse opinions.”

The Jewish Community Relations Council of Milwaukee also is refraining from taking a position, and for the same reasons, according to director Elana Kahn-Oren.

She noted that the Jewish Council for Public Affairs, the umbrella body representing 14 national and 125 local federations and JCRCs, put out a resolution several years ago supporting the right to collective bargaining and that the American Jewish community “has deep roots in labor.”

But, Kahn-Oren pointed out, not all Wisconsin Jews oppose the governor’s bill. “There are Jews who support Walker and those who have joined the protests,” she said.

Hagler said she had not heard of any rabbis or Jewish organizations that have come out in support of the governor’s bill, called Senate Bill 11.

The president of the local chapter of the Zionist Organization of America, Warren Jacobson, said he voted for Walker but opposes the bill.

“I’m basically conservative and I vote Republican across the board, but the fact that he wants to get rid of collective bargaining was a big surprise to me,” Jacobson said.

Jacobson retired two years ago after 18 years as a public school teacher, and he says teachers need the protection of collective bargaining.

“I’ve tasted anti-Semitism and discrimination, and I want someone supporting me,” he told JTA. “I paid $800 a year to the union. They let me down on a number of occasions, but we still need them.”