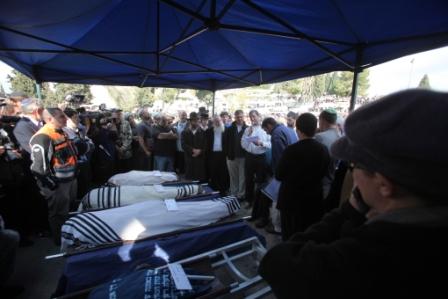 The bodies of the five victims of the terror attack in the West Bank are laid out at their Jerusalem funeral, March 13, 2011. ( Yossi Zamir/Flash 90)
Advertisement

JERUSALEM (JTA) — Demonstrations in solidarity with settlers and a Cabinet committee’s approval for new housing in the West Bank are among the Israeli responses to the suspected terrorist attack that killed five members of a West Bank Jewish family.

An estimated 20,000 people attended Sunday afternoon’s funeral at a cemetery in Jerusalem to mourn the deaths of Udi Fogel, 36, and Ruth Fogel, 35, and their children Yoav, 11; Elad, 4; and Hadas, 3 months.

Two sons — Roi, 8, and Yishai, 2 — were sleeping in a side bedroom and were spared in the Sabbath eve attack in Itamar on March 11. A daughter, Tamar, 12, returned home at midnight from a youth group program to discover the massacre.

The family had been evacuated from Gush Katif and lived in Ariel before building a home in the northern West Bank, near the Palestinian city of Nablus.

Following the funeral, protesters holding demonstrations across Israel in sympathy with residents of the West Bank blocked junctions, some holding signs reading “We are all settlers” and “Peace isn’t signed with blood.” One of the largest rallies took place in Tel Aviv near the army’s national headquarters. Passing drivers honked in solidarity.

Earlier Sunday, an Israeli Cabinet committee approved the construction of hundreds of housing units in West Bank settlements, reportedly in response to the attack. The vote, after several months of no new construction approval, is for 500 housing units in Gush Etzion, Ma’ale Adumim, Ariel and Kiryat Sefer.

The settlements are believed to be among those that will remain as part of Israel under a peace agreement with the Palestinians. The committee discussed expanding the Itamar settlement or creating a new settlement in memory of the victims, Haaretz reported.

The United States, which wants an Israeli freeze on settlement building, reportedly was informed of the decision.

Danny Dayan, chairman of the Yesha Council settlers’ umbrella group, called the approval of new housing in response to the attack “a small step in the right direction.” He said it was “deeply troubling that it requires the murder of children in the arms of their parents to achieve such an objective.”

At the funeral, Knesset Speaker Reuven Rivlin said Udi and Ruth Fogel personified devotion to the Zionist vision and were pioneers.

“Your hands held both scythe and book, teachers and settlers whose entire lives were the love of their country and the love they had for their neighbors,” Rivlin said. “Build more, live more, more footholds — that is our response to the murderers so that they know — they can’t defeat us.”

Udi Fogel’s brother Motti said that “All the slogans about Torah and settlement, the Land of Israel and the Jewish people try to make us forget the simple and painful truth: You are gone. You are gone and no slogan will bring you back. Above all, this funeral must be a private event. Udi, you are not a symbol or a national event. Your life had a purpose of its own and your horrible death must not make your life into a pawn.”

On Sunday, it was clarified that the fringe Al-Aksa Martyrs Brigades of Imad Mughniyeh had claimed responsibility for the attack. The group is named for Mughniyeh, who was Hezbollah’s chief of military operations until he was killed by a car bomb in Damascus in 2008. Hezbollah blames Israel’s Mossad intelligence agency for the killing.

In Gaza, Hamas officials reportedly handed out candy to residents in celebration of the attack.

Israeli military and police forces were scouring the West Bank Sunday for the murderer or murderers, as well as to prevent revenge attacks by Israeli settlers.

“Israel will not stand by idly after such a despicable murder and will act vigorously to safeguard the lives of the citizens of Israel and punish the murderers,” Prime Minister Benjamin Netanyahu said in a statement released after the Sabbath ended. “I expect the international community to sharply and unequivocally condemn this murder, the murder of children.

Netanyahu also called on the Palestinian leadership, who he said condemned the attacks with “weak and mumbled statements,” to “stop the incitement that is conducted on a daily basis in their schools, mosques and the media under their control. The time has come to stop this double-talk in which the Palestinian Authority outwardly talks peace and allows — and sometimes leads — incitement at home.”

P.A. President Mahmoud Abbas called the killings “despicable,” “inhuman and immoral” in an interview Monday morning on Israel Radio.  “A human being is not capable of something like that,” he said in Arabic, translated into Hebrew by the inteviewer. Abbas also said that the P.A. would work to find the killer or killers responsible and that he has agreed a request by Israel to launch a joint investigation. Abbas also took issue during the interview with Netanyahu’s accusation that the Palestinian Authority incites against Israel in its mosques and schools and offered to set up an Israeli-Palestinian-American committee to look in to the allegations.

The White House and the Mideast Quartet — the diplomatic grouping of the United Nations, the European Union, Russia and the United States that guides the peace process — also condemned the attack, offering their condolences to the victims’ family and to the Israeli people.

“There is no possible justification for the killing of parents and children in their home,” said the White House statement, which called the attack an act of terrorism.

“Attacks on any civilians are completely unacceptable in any circumstance,” the Quartet’s statement said. The Quartet also called to “expedite efforts to achieve Israeli-Palestinian and comprehensive Arab-Israeli peace.”

Volunteers for ZAKA, a search and rescue organization, described the scene shortly after the terror attack as “absolutely horrific.”

“We saw toys lying next to pools of blood, Shabbat clothes covered in blood and everywhere the smell of death mixing with the aroma of the Shabbat meal,” one volunteer said.

The volunteers said the sights were “among the worst we have ever seen.”

Israeli President Shimon Peres said in a statement that the attack “indicates a loss of humanity.  There is no religion in the world or any faith that allows these kinds of horrible acts.”

Meanwhile, the head of Israel’s Government Press Office is demanding an apology from Cable News Network over its coverage of the attack, which avoided describing the incident as a terrorist attack and then placed the words ‘terrorist attack’ in quotation marks in a headline on its website.

The CNN report said that the Israeli military was searching for an intruder, though the official Israel Defense Forces statement said soldiers were searching for the terrorist.

Also on Sunday, Members of Palestinian Authority President Mahmoud Abbas’ Fatah faction in an official ceremony named a town square in the West Bank town of Al-Bireh, near Ramallah, in memory of a terrorist involved in killing 37 Israelis

Dalal Mughrabi was killed in a 1978 bus hijacking on Israel’s coastal road. She had directed the hijacking of two buses on the coastal road between Haifa and Tel Aviv, which led to the murder of 37 Israelis, including 13 children.No PA government officials attended the ceremony, according to Reuters.