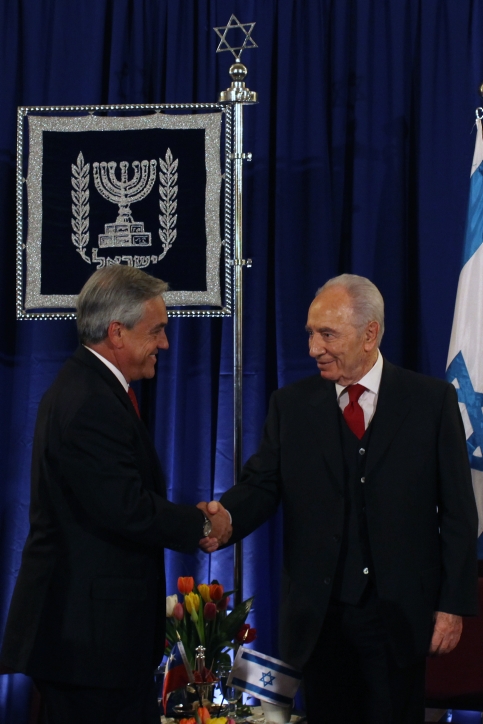 WASHINGTON (JTA) — It’s time for the West to woo Latin America — some will say it’s about time.

The United States and Israel appear to be heading toward increasing their focus on the area following years of neglect that has resulted in closer ties between Latin America and Iran — and gains for the Palestinians. The shift comes amid Iran’s deepening influence in the region, as well as the successes of a Palestinian diplomatic offensive that has seen eight Latin American nations agree to recognize a Palestinian “state” in recent months.

President Obama’s visits this week to Brazil, Chile and El Salvador follow on the heels of a visit to Israel last month by Chilean President Sebastian Pinera.

Israeli Foreign Ministry officials and American Jewish groups that focus on Latin America say the West’s attention to the area should have come sooner.

“When you have a vacuum it will be filled,” she said, referring to Iran’s courting of Latin American countries that chafe under U.S. domination of the hemisphere — chief among them Venezuela. “This is the point of view of many Latin American Jewish communities who feel that they have not been treated as a priority.”

An Israeli Foreign Ministry official speaking on condition of anonymity acknowledged the neglect, saying it was primarily a function of resources diverted to peacemaking in the region since the launch of the Oslo process in 1993.

That has been redressed in recent months with several high-profile visits to the continent, including Israeli Foreign Minister Avigdor Lieberman’s Brazil visit in July 2009, and then-President Luiz Inacio Lula da Silva’s return visit a year ago.

The outreach is coordinated with the local Jewish communities, and Vann noted a number of successes, including the visit to Israel this month of Chile’s president and last year of Panama’s president, Ricardo Martinelli.

“They spoke about Israel’s right to exist within secure borders, they said negotiations have to continue and that an agreement has to be part of bilateral negotiations,” she said. “In the end, the Israelis were happier with it than the Palestinians.”

Vann and her boss, AJC director David Harris, just returned from a high-profile tour of Argentina, Brazil and Chile to address issues of concern to Jewish communities.

The highest-profile effort is Obama’s tour of Brazil, Chile and El Salvador. Obama did not publicly address the Middle East when he met over the weekend with Dilma Roussef, his Brazilian counterpart. The visit focused on free trade with Latin American nations as the continent is showing an economic turnaround at a period when much of the West is otherwise struggling with recession.

Nonetheless, the joint Obama-Roussef statement pointed to an effort to bridge differences that erupted last year over the refusal by Brazil and Turkey to join the international effort to isolate Iran over its nuclear weapons program.

“They reaffirmed both countries’ commitments on disarmament, nuclear non-proliferation, and the peaceful uses of nuclear energy, with a view to achieving the peace and security of a world without nuclear weapons,” it said.

Daniel Mariaschin, the executive vice president of B’nai B’rith International, said it was his understanding from his administration contacts that Obama in private meetings is sounding out Roussef to see if she plans on continuing the tilt of her predecessor, Lula, toward setting Brazil apart from the U.S. policy on the Middle East.

“From what I understand, he’s going to ask where will Brazil be going from this particular point,” said Mariaschin, who spoke to JTA a day before the summit, and who was slated to head to Latin America this week. “He will be raising the issue to try and discover if there is daylight in the policies between Lula and Roussef.”

Lula, who was Roussef’s mentor, was behind both Brazil’s decision to recognize Palestine and to attempt, with Turkey, to strike a separate nuclear inspections deal with Iran. Brazil predominates in South America, and its decisions had a domino effect, particularly on recognizing Palestine.

Vann said Lula had his eye on history as he left office.

“He wanted to go out with a bang,” she said.

That’s typical of a region that often has sought to distinguish itself from its powerful northern neighbor, Mariaschin said.

“There’s an interest in showing bona fides to the Islamic world, the Arab world, the non-aligned, that these countries in Latin America are of an independent mind,” he said.

Other factors have played into the pro-Arab tilt of an area that once was perceived as a redoubt of pro-Israeli sentiment; Latin America votes tilted the U.N. 1947 vote toward creating a Jewish state.

Among them are the substantive Arab diasporas in the region, including what is believed to be the largest Palestinian diaspora in the world in Chile and a Lebanese community in Brazil that is said to outnumber the Lebanese in Lebanon.

Another factor is the tendency of Latin America nations to follow each other’s leads. Venezuelan President Hugo Chavez courted Iran as a means of needling the United States, which had sought his ouster in the early 2000s because of his nationalization of the oil industry.

“More often than not, there’s a tendency among Latin Americans to vote as a bloc” in international bodies, Mariaschin said. “I don’t think that’s helpful or healthy.”

The Iranian influence on Latin America was especially troublesome, he said, not just as it related to how it hindered efforts to set up a united front against the prospect of a nuclear Iran, but also in the reports of the infiltration of Iranian terrorists into the region.

U.S. lawmakers, led by Rep. Ileana Ros-Lehtinen (R-Fla.), the chairwoman of the House of Representatives’ Foreign Affairs Committee, have pressed the Obama administration to make a priority of driving Iran influence away from Latin America.

The threat is real, Vann said, particularly in the little-policed “triangle” where Brazil, Argentina and Paraguay meet.

“Iran’s presence in the region is very detrimental, and it’s not theoretical,” she said, pointing to the certainty in Western intelligence circles that Iran was behind deadly attacks on the Israeli Embassy in Buenos Aires in 1992 and its AMIA Jewish community center in 1994.

Vann cautioned against overstating Iran’s danger, however, noting an incipient skepticism in the region of such claims stemming from how the evidence the Bush administration used to make the case for the Iraq War turned out to be unfounded.

“They truly don’t believe Iran is a threat, and they draw parallels with Iraq and WMD,” she said, using the acronym for weapons of mass destruction.  “We have to be careful not to magnify the problem.”

Currently, she said, the only solid evidence of illicit Iranian activity in the region points to money laundering. Accusing the Iranians of planning imminent terrorist attacks, for instance, could undermine the case for tracking Iranian activity.