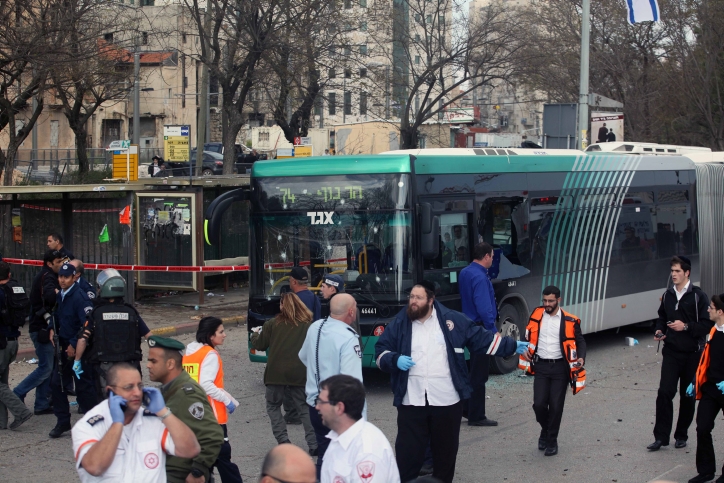 Emergency personnel responding to the scene of a bomb explosion near a bus station in the center of Jerusalem, March 23, 2011. (Kobi Gideon / Flash90)
Advertisement

JERUSALEM (JTA) — Violence between Israel and militant Palestinians rose sharply this week with a bombing in central Jerusalem and a dramatic increase in rocket attacks on southern Israel.

In a terrorist attack on Wednesday afternoon, a bomb planted near a telephone pole exploded near Jerusalem’s International Convention Center, Binyanei Ha’uma, killing a 59-year-old woman and injuring more than two dozen people.

Earlier, rocket attacks from Gaza on Tuesday and Wednesday struck the Israeli cities of Beersheba and Ashdod, injuring one man.

Meanwhile, Israeli forces struck targets in the Gaza Strip, including what the Israeli Air Force described as the rocket launcher from which a Grad rocket was fired at Ashdod on Tuesday night. In one of the Israeli air raids, four members of Islamic Jihad traveling in a car were killed. In another, four Palestinian civilians were killed in an area from which mortar shells had just been fired.

The killing of civilians prompted a statement of regret from Israeli Prime Minister Benjamin Netanyahu, who also said that “It is regrettable that Hamas continues to intentionally rain down dozens of rockets on Israeli civilians even as it uses civilians as human shields.”

The sudden escalation in attacks, coming with Israel still reeling from the March 11 attack in the Jewish West Bank settlement of Itamar in which five family members were stabbed to death, raises fresh questions about the sustainability of the calm that has prevailed between Israel and militant Palestinians since the end of the Gaza war in January 2009.

Since the cease-fire that ended that war, known in Israel as Operation Cast Lead, rocket fire on southern Israel has been sporadic and mostly carried out by groups other than Hamas, which rules the Gaza Strip. But the mortar and rocket attacks in recent weeks, which have included the use of more sophisticated, longer-range missiles known as Grads, have been the work of Hamas — a sign that the shaky cease-fire between the Palestinian terrorist group and Israel may be falling apart.

“I see the escalation is already here in a number of fronts — in the South and also in Jerusalem,” Interior Minister Eli Yishai said at the scene of Wednesday’s explosion in Jerusalem, according to The Jerusalem Post.

In the South, Deputy Prime Minister Silvan Shalom threatened a new operation in the Gaza Strip.

“The period of restraint is over; we must do everything we can to strike out against those who wish to hurt the innocent,” Shalom said on a visit to the site in Beersheba struck Wednesday by two long-range Grad rockets. “I hope it won’t come to another Operation Cast Lead, but if there is no other choice we will launch another operation.”

As of late Wednesday afternoon, no one had taken responsibility for the bombing in Jerusalem, the first major bombing in Israel’s capital city since 2004. More recent deadly terrorist attacks involved gunmen, as in the case of the Mercaz Harav attack in March 2008 that left eight yeshiva students dead, or Palestinians commandeering bulldozers or cars and using them as weapons.

Following Wednesday’s attack, Netanyahu said he would delay a planned trip to Moscow.

Police said the bomb was left in a bag in a telephone booth next to a busy bus stop along a main artery in central Jerusalem about a block from the city’s central bus terminal. The blast blew out the windows of two buses picking up passengers.