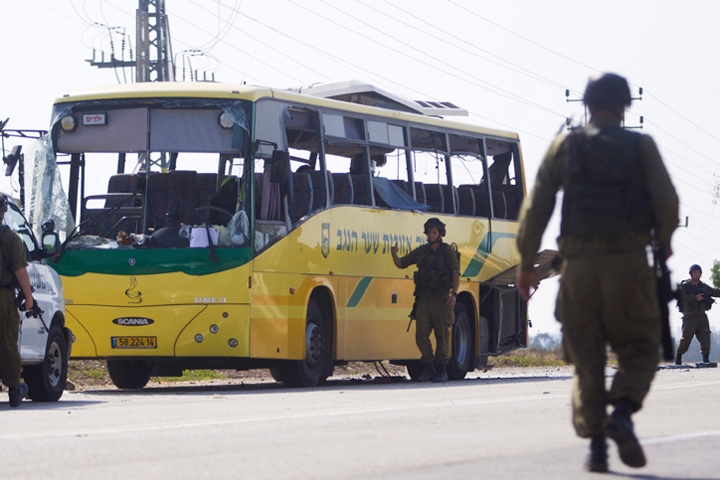 Israeli soldiers outside a school bus hit by a rocket near Sderot from the Gaza Strip, injuring two, including a teenager seriously, April 7, 2011. (Dima Vazinovich/Flash90)
Advertisement

JERUSALEM (JTA) — An Israeli teen was critically injured when a rocket fired from the Gaza Strip hit the school bus in which he was riding.

The driver of the bus, which had dropped off all the schoolchildren except for the injured teen, also was wounded by shrapnel in Thursday afternoon’s attack, Haaretz reported.

It is unclear whether the bus, traveling near Kibbutz Sa’ad, located next to the Gaza border, was struck by a mortar or an anti-tank missile.

The teen, who was resuscitated at the site of the attack, was airlifted to a hospital in Beersheba.

A barrage of 16 rockets and mortars struck southern Israel following the bus attack. Roads near the area of the attack were closed to prevent further injury, according to reports.

Defense Minister Ehud Barak ordered an immediate retaliation for the attack. The Israel Defense Forces reportedly launched an attack on targets east of Gaza City less than an hour later, killing one and wounding five, according to Palestinian officials, Ynet reported.

A statement issued from Barak’s office said he ordered the strike on a Hamas target in Gaza because “he holds Hamas responsible for all terrorist attacks emanating from the Gaza Strip.” No group has claimed responsibility for the attack.

On Tuesday, Israeli tanks killed an armed Palestinian as he approached the border between Gaza and Israel at the same time that three mortar bombs exploded in southern Israel.