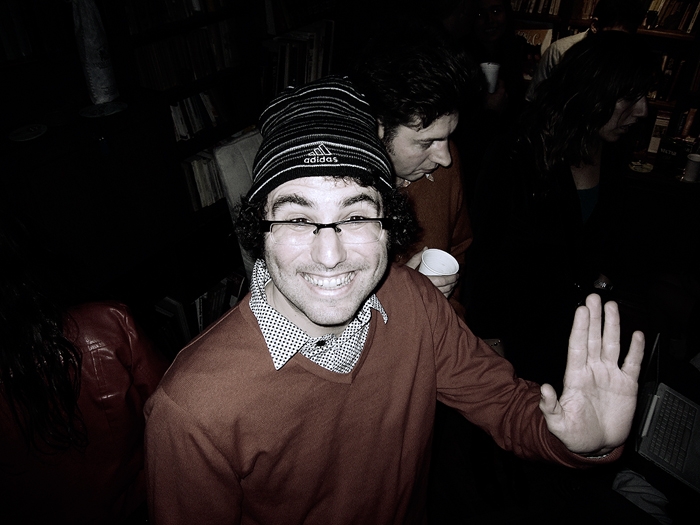 SAN FRANCISCO (JTA) — Morgan Friedman loves the way people talk. He wants others to love it, too.

Pow! Here’s overheardinnewyork.com, a site for offbeat conversations that his team of eavesdroppers hears on the streets.

Now Friedman is taking that same love of lingo and combining it with his high-tech know-how to launch Urban Sefer, an online project aimed at producing crowd-sourced, slang-filled translations of traditional Jewish liturgy.

“When these documents were written, they were written in the common language, the way people spoke,” Friedman told JTA. “But today when I read these ancient documents, I need to sit and think in order to translate it into my language. It requires intellectual work.”

And that, as everyone knows, is not what young people like to do.

“Let’s take these traditions handed down for thousands of years and make the same points, but do it in the language that’s part of our everyday life,” Friedman says.

The folks at the Jewish New Media Innovation Fund seem to agree.

In March, the group awarded Friedman one of its initial nine grants for new digital media projects aimed at engaging young Jews in Jewish life, learning and community.

“These projects share an ability to harness new digital media tools and technologies that are a large part of young people’s lives today and use them to enhance efforts to engage young people in Jewish life,” said Rachel Levin, associate director of the Righteous Persons Foundation, which joined the Jim Joseph Foundation and the Charles and Lynn Schusterman Family Foundation in sponsoring the new fund.

The nine finalists were chosen from more than 300 applicants vying for a total of $500,000 to be disbursed over the next 12 months, the fund’s first year.

Urban Sefer is Friedman’s first Jewish project. He was raised Orthodox in Great Neck, N.Y., so he knows his Jewish ritual, he says, though he fell away from religion after his bar mitzvah.

In college Friedman was an English major, and he says his idea of a good time is spending one weekend a month reading a Shakespeare work he doesn’t know well.

“I’m the least cool guy ever,” he says. “I like reading old books and listening to people tell jokes.”

The first text Friedman is tackling is the Passover Haggadah. Two years ago, he and his Argentinean girlfriend dashed off a version in Spanish slang as a sort of lark. It proved so popular among Jews in Argentina that last year he decided to do the same thing using English slang. But instead of sitting down and writing it himself, Friedman wants to involve lots of people.

So he’s taking the project online and inviting anyone who’s interested to sign up and take part — crowd sourcing, in modern vernacular.

“What’s a modern way to do this? Crowd sourcing,” he says in typical I’ll-answer-my-own-questions-thank-you Friedman style. “The epic stories in the Bible used classic methods of telling stories, but today we tell stories in film, on TV, online. If Moses were alive today, he’d be making movies.”

Urban Sefer isn’t the only open-source Jewish text project out there. The granddaddy of the genre is Open Source Haggadah, an online project launched in 2002 that allowed users to construct their own personalized Haggadahs using a variety of sources, including user-generated content.

That project folded in 2004 when funding ran out — its operation was more or less taken over by Jew It Yourself — but it paved the way for other similar initiatives including the Open Siddur Project and Build a Prayer, which allow users to construct personalized prayer books, and the newly launched Haggadot.com, another recipient of a Jewish New Media Innovation Fund grant for 2011-12.

Friedman says he doesn’t know the people working on the other projects. He’s pretty much alone in Buenos Aires, and says he’s just putting up his project on the Internet hoping it will attract a community of like-minded younger Jews eager to harness their creative energies together.

After the Haggadah, Friedman says he’d like to take on a rewrite of the Bible, starting with Ecclesiastes, and then move on to the Shabbat prayer book.

“If there was ever a biblical work made for modern slang, it’s Ecclesiastes,” he says. “It’s about a guy who has everything but is looking for meaning, so he goes out, gets drunk all the time, has sex with a lot of women — nothing works.

“Finally he realizes that enjoying little moments with friends, that’s the real meaning. This is timeless wisdom! The power of modern English vernacular is made for it.”

Just because he’s focusing on street talk doesn’t mean Friedman is taking his subject lightly. This is serious work, he insists, meant to draw young Jews back to connect with their tradition. He’s working with a rabbi “to make sure it’s kosher” and is investing a lot of his own money.

And because these translations are being crowd sourced, the outline he has in his mind may or may not pan out.

“I don’t know what the final version will be like,” he says, “but the website will be live in a month or two. We’ll see then.”