On Independence Day, a reminder about Gilad Shalit 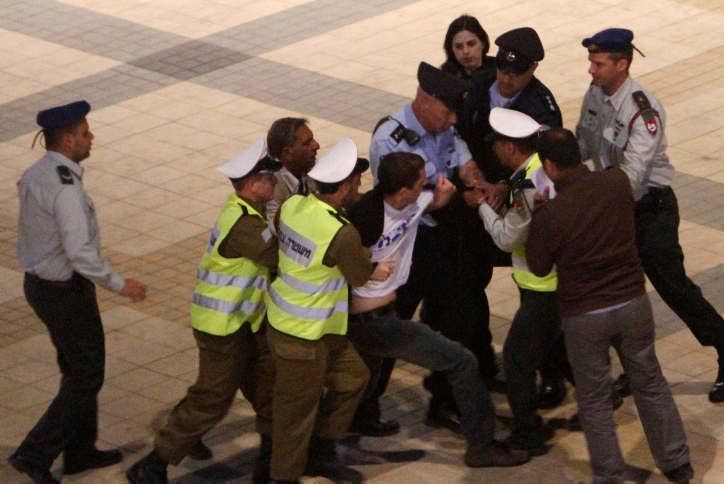 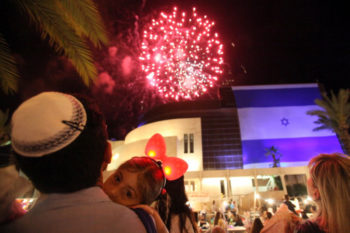 Israelis watch fireworks in celebration of Israel’s 63rd Independence Day in Ashkelon on May 9, 2011. (Kobi Gideon/Flash90) 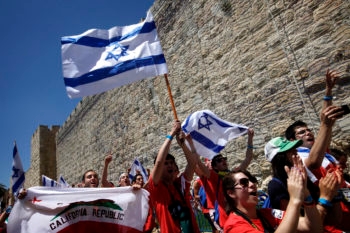 Israeli and Diaspora youths taking part in the March of the Living walk by the walls of Jerusalem’s Old City on Israel’s Independence Day on May 10, 2011. (Miriam Alster/FLASH90)

Israeli Prime Minister Benjamin Netanyahu and President Shimon Peres participate in a ceremony for outstanding soldiers as part of Independence Day celebrations, at the presidential residence in Jerusalem on May 10, 2011. (Kobi Gideon/Flash90)

JERUSALEM (JTA) — As Israelis celebrated the country’s 63rd Independence Day, they had much more on their minds than barbecues and fireworks.

The carefully crafted theme of the day, “Looking after one another — the year of mutual care,” raised the hackles of some Israelis who do not believe the state is looking after everyone.

At a ceremony Monday night at Mount Herzl that ushered in Independence Day celebrations, Yoel Shalit, the brother of captive Israeli soldier Gilad Shalit, disrupted the iconic torch-lighting by bolting with his girlfriend to the stage shouting and waving a sign that read “Gilad is still alive.” He was quickly ushered away by security personnel.

Later, opposition leader Tzipi Livni, the head of the Kadima Party, went to talk with him.

Knesset Speaker Reuven Rivlin dedicated his celebratory torch to Shalit, along with Israel’s other MIAs and convicted spy Jonathan Pollard.

The 12 torches representing the 12 tribes of Israel were lit by Israeli citizens chosen to represent various sectors of society. Among the honorees were an Israeli Prison Services employee honoring the police cadets killed in the Carmel forest fire; Rabbi Shimon Rosenberg and his grandson Moshe Holtzberg, whose parents, Gavriel and Rivkah Holtzberg, were killed in the 2008 terrorist attack at Mumbai’s Chabad House; Orit Dror, who donated her son’s organs upon his death from an illness; and Barbara Goldstein, deputy executive director of Hadassah in Israel, which is marking its 100th year.

In Independence Day interviews in the Israeli press, President Shimon Peres called for peace negotiations with the Palestinians, despite a unity agreement signed between Fatah and Hamas, the terrorist group that rules the Gaza Strip.

“We are still facing evil forces, especially those that emanate from Iran,” he said. “This call, by a regime that is a danger to the entire world, should be met by an uncompromising mobilization of the international community. We are determined, together with our supporters everywhere, to fight anti-Semitism and delegitimization.”

“On this day, it is our duty to celebrate our great achievements, success and hopes that have been realized.”

Referencing Israel’s national anthem, “Hatikvah,” Netanyahu said, “The saying, ‘Being a free nation in our country’ has become the reality of our life, and these are the moments when we can put all our differences and disagreements aside. We know that there are many things which must be fixed, but we must be proud of what we’ve achieved and, above all, feel the power and strength of unity.”

As is custom, Israelis spent the day at barbecues, picnics and hikes at national parks and nature reserves. Some 63 national heritage sites were open free to visitors on Tuesday, including Independence Hall in Tel Aviv.

The Israel Defense Forces also opened several of its bases — including the Navy Air Force and Ground Forces – to visitors on Tuesday, where special events were held. At Beit Hanassi, the president’s official residence, Peres, Netanyahu, Defense Minister Ehud Barak and IDF Chief of Staff Lt. Gen Benny Gantz gathered for an annual Independence Day celebration. They each sang their favorite Israeli song in duet with a famous Israeli musical artist.

The weather, as usual, was bright and sunny.