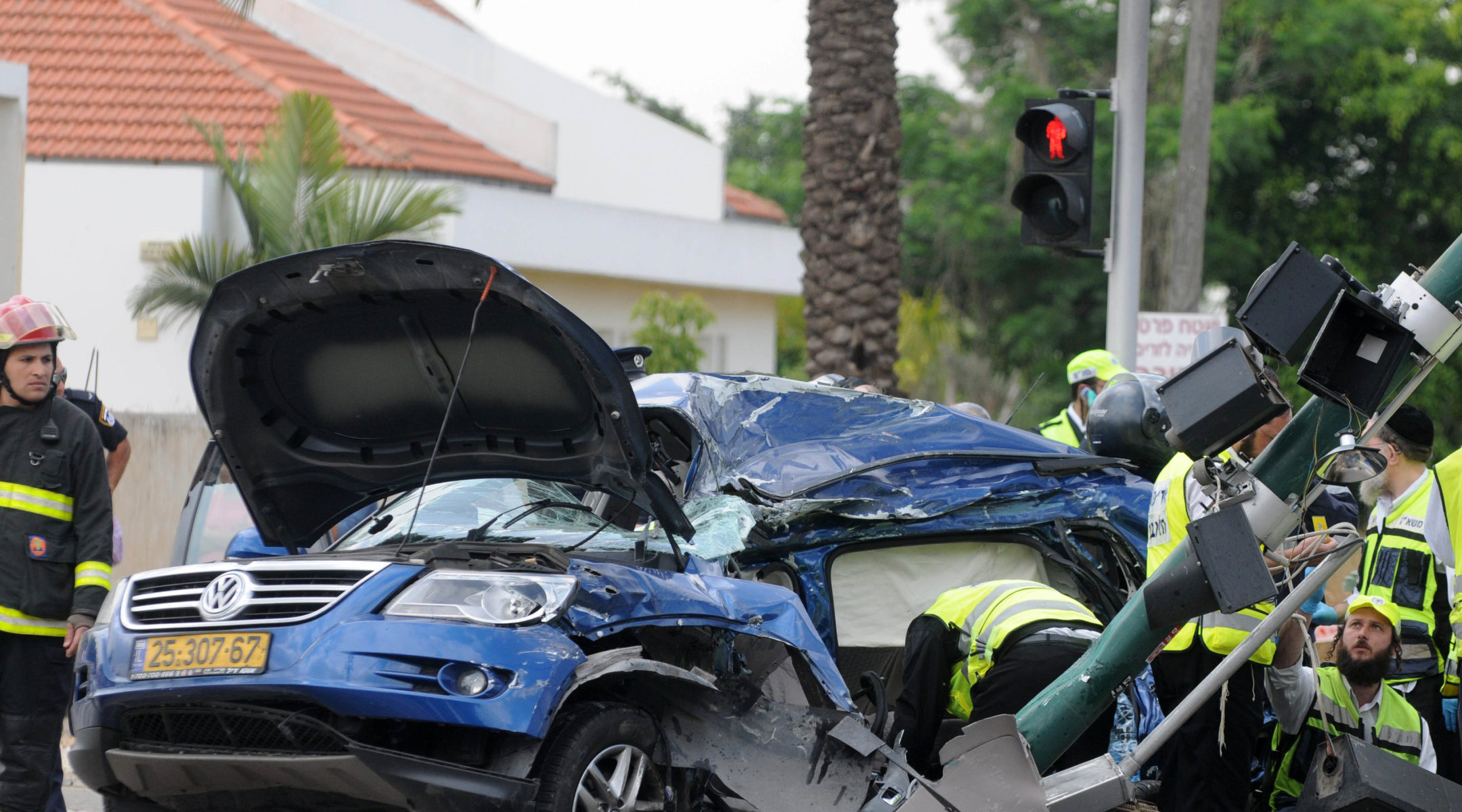 One person was killed and more than a dozen wounded after an Arab Israeli truck driver rammed his vehicle into cars and pedestrians in a suspected terrorist attack in Tel Aviv, May 15, 2011. (Yossi Zeliger/Flash90)
Advertisement

JERUSALEM (JTA) — In the wake of disturbances on Israel’s borders that have resulted in as many as 14 deaths, Prime Minister Benjamin Netanyahu said in a national address that he has ordered his military to stop the infiltration and defend the country’s sovereignty.

“This is an appeal against the very existence of the State of Israel which they call a catastrophe,” Netanyahu said Sunday evening in Israel, responding to massive Arab protests both inside and outside of Israel for Nakba Day — the day Arabs mark the “catastrophe” of Israel’s birth on May 15, 1948.

“We hope the calm and quiet will quickly return, but let nobody be mistaken, we are determined to defend our borders and sovereignty,” Netanyahu said.

Hundreds of Arabs from Syria stormed across the border into Israel on Sunday, prompting Israeli troops to respond with live fire killing up to four people, according to reports. By Sunday evening, most of the infiltrators had been rounded up and returned to Syria.

Some of the Syrian infiltrators told Israeli media that they wanted to be granted asylum to live in Israel, calling it safer than living in the current uprising against the Syrian government. Others said they were there to liberate the Golan Heights from Israel.

The incident, which marked the first major eruption of violence along the border in decades, came on the same day that an Israeli Arab rammed a truck into pedestrians in Tel Aviv, killing one man and injuring a dozen people.

Elsewhere around Israel and the West Bank, thousands of Palestinians protested to mark Nakba Day.

The number of Arabs from Syria who breached the border on the Golan Heights was estimated at up to 400. The Israel Defense Forces declared the area of Majdal Shams, a Druze town near Mount Hermon, a closed military zone as Israeli troops tried to round up those who had infiltrated the border.

In Lebanon, thousands of Arabs reportedly converged on Israel’s border to demonstrate, but they were pushed back when the Lebanese army fired warning shots into the air. Israeli soldiers also reportedly shot in the air and at the feet of Lebanese demonstrators.

Up to 10 Lebanese demonstrators were killed in the incident, with most believed to have been killed by the Lebanese army, according to reports.

At least 10 Israeli troops were injured in the incidents on the Syrian and Lebanese borders.

In Tel Aviv, Israeli law enforcement officials said Sunday morning’s truck rampage appeared to be a terrorist attack. The 22-year-old man from the Israeli Arab village of Kafr Kassem who drove into cars and pedestrians on a busy thoroughfare reportedly told police that his tire had exploded, causing him to lose control of his truck.

The violence came two days after a Palestinian teen was killed during a protest in eastern Jerusalem. The boy may have been shot by a security guard for several Jewish families who live in the area.

Hamas’ prime minister in the Gaza Strip, Ismail Haniyeh, told thousands of Muslim worshippers in a mosque Sunday morning that Nakba Day should be observed this year “with great hope of bringing to an end the Zionist project in Palestine.”

Haniyeh made the remarks less than a week after his Islamist party and the Fatah Party of Palestinian Authority President Mahmoud Abbas reconciled and announced plans to form a unity government in the coming weeks.

“This is the first year crowds will march to Palestinian borders, annulling the old saying that elderly people die and younger generations forget the past,” Haniyeh told the crowd, according to the Ma’an Palestinian news service.

In a nationally televised address, Abbas said of the killed protestors, “Their blood will not go to waste. Their blood was spilled for the freedom of our Palestinian people and for its rights.”

Netanyahu, speaking at the beginning of the weekly Cabinet meeting Sunday morning, said that “I regret that there are extremists among Israeli Arabs and in neighboring countries who have turned the day on which the State of Israel was established, the day on which the Israeli democracy was established, into a day of incitement, violence and rage. There is no place for this, for denying the existence of the State of Israel. No to extremism and no to violence. The opposite is true.”