In West Bank, Palestinians marking Nakba Day encouraged by Arab Spring in their fight against Israel 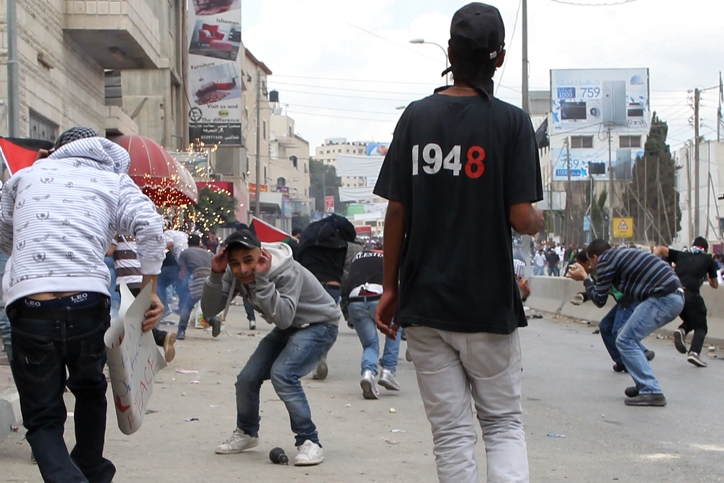 Stone-throwing Palestinians clash with Israeli troops near the Kalandiya checkpoint between the West Bank city of Ramallah and Jerusalem on the 63rd anniversary of the Nakba, May 15, 2011. (Nati Shohat/Flash 90)
Advertisement

KALANDIYA, West Bank (JTA) — Clouds of tear gas hovered over hundreds of rioting Palestinian youths on the road to Jerusalem, where demonstrations marking the anniversary of Israel’s founding 63 years ago turned violent.

“I want a third intifada,” said Ala Barghouti, a 21-year-old accounting student, his nostrils stuffed with tissues to keep out the sting of the tear gas. “I hope things do escalate today. A third intifada will help move the Palestinian Authority to improve our political situation.

“We need more support out here, a stronger presence to get everyone out on streets,” he said. “We need to get the Palestinian cause back on world radar again.”

Energized by the uprisings sweeping the Arab world, a recent unity deal between Fatah and Hamas, and hopes for international recognition of statehood by the U.N. General Assembly in September, unusually large crowds turned to the streets on Sunday to mark the day Palestinians call the Nakba, Arabic for “catastrophe” — Israel’s founding on May 15, 1948.

The West Bank clashes near the Kalandiya refugee camp appeared to be part of a larger effort to overwhelm Israel’s borders and took place as Palestinians thronged border areas in the Gaza Strip, Lebanon and Syria. More than a dozen people reportedly were killed.

In Ramallah, hundreds came together for what was a relatively peaceful gathering within the confines of the city, out of view of Israeli troops. A mixed crowd of young and old mingled and spoke of the hopes the so-called Arab Spring has aroused in Palestinian society.

“All of the nations in the world, and especially the countries in this region, are looking for freedom and independence,” said Zaki Attari, 45, an employee of the Palestinian Finance Ministry, as he made his way through thick crowds and the sound of drumbeats.

Rows of young boys wearing black held black wooden keys symbolic of the homes Palestinian families lost during the fighting in 1948, when hundreds of thousands fled or were expelled from their homes.

In the square, Ola Elian, a dark-haired 14-year-old, made the victory sign and smiled, flashing a mouthful of braces.

As Elian spoke, a group of young men drove by on a truck shouting chants through loudspeakers.

“We are going to Jerusalem, even if it means becoming martyrs,” some chanted. “We die to let Palestine live.”

Elian said she wanted to join the protesters demonstrating at Kalandia, near an Israeli checkpoint, but her concerned parents had asked her to stay away.

Elsewhere in the crowd, a 21-year-old law student named Quteiba Majed stood with a thin kaffiyeh scarf around his head. He, too, said he had wanted to face off against Israeli soldiers but that a directive from the Palestinian Authority to refrain from clashes kept him in Ramallah.

But, he added, things were changing.

“Already we are feeling that the Fatah leadership is listening more closely to the young people,” Majed said, because of the nature of the youth-led uprisings in neighboring countries. “Soon Fatah will be led by a new, younger face.”

Omar Kitan, 30, who tiles floors for a living, said, “I don’t think anyone really wants things to escalate now. Yes, we might be jihadists as those chanting say, but now we are fighting by peaceful means. We need to be focusing on the Hamas-Fatah reconciliation. That needs to be the priority now.”

Not everyone was convinced that the reconciliation agreement reached last month by the longtime rivals would last.

“Fatah and Hamas together will not succeed because a new government will soon have to be chosen, including the appointment of a prime minister, so I figure they will start fighting over positions by next week,” said Adnan Salman, a sales manager who works for the Palestinian telecommunications company.

Meanwhile, on a large stage, teenagers danced to the words of a song recalling what was lost in 1948.

“To you, our country we will return,” the song went. “The keys are with us, our return is imminent.”