With border breaches, has the Arab Spring reached Israel? 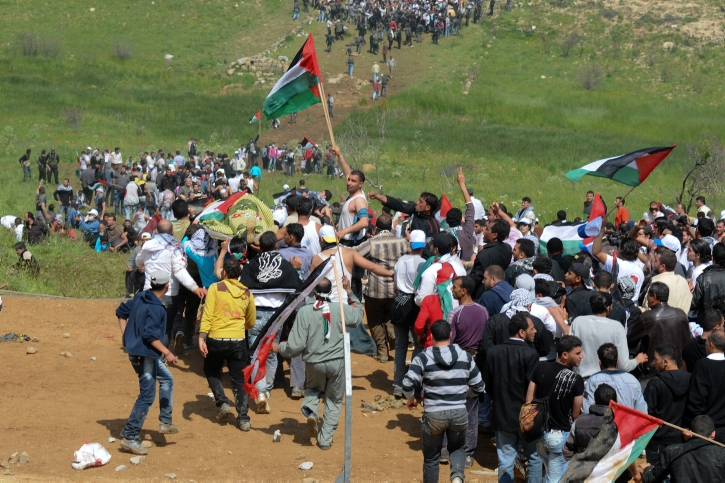 Arab demonstrators marking the 63rd anniversary of the Nakba hold Palestinian flags as they approach the village of Majdal Shams in the Golan Heights, between Syria and Israel, May 15, 2011. (Hamad Almakt/Flash 90)
Advertisement

TEL AVIV (JTA) — If a single phrase could capture the sentiment that motivated thousands of Arabs to try to cross Israel’s borders on Sunday to “retake Palestine” from the Jews, it would be this: Yes, we can.

That can-do attitude had toppled regimes in Egypt and Tunisia, and threatened dictators from Tripoli to Damascus. So why not apply it toward Israel? If Arab leaders weren’t willing to send their armies to storm the Zionist state, the Arab protesters figured, well then, they’d just do it themselves.

The charge toward Israel’s borders from Arabs in Syria, Lebanon, Gaza and the West Bank led to the most violent day in Israel in months, with about a dozen protesters reportedly killed by Israeli fire — some on foreign soil — and a suspected terrorist attack in Tel Aviv that left one Israeli civilian dead.

Israeli Prime Minister Benjamin Netanyahu said late Sunday that Israel would do what it needed to defend itself.

“Let nobody be mistaken, we are determined to defend our borders and sovereignty,” he said.

Coming on Nakba day – the annual date Arabs mark the “catastrophe” of Israel’s birth on May 15, 1948 – the protests signaled that the Arab Spring, which until now has spared Israel, may be arriving at the borders of the Jewish state. Among Palestinians, calls for a third Palestinian intifada are rising – at least on Facebook.

“The whole Arab world is roiling around the Nakba,” Professor Eyal Zisser, an expert on Syria at Tel Aviv University’s Moshe Dayan Center for Middle East and African Studies, told JTA. “Add to that that youngsters think they can make a difference. They decided that instead of just shouting and demonstrating, they’d go across the border.”

For Israel, the breach of the Syria-Israel border came as something of a surprise. It marked the first major violence along the border since the May 1974 disengagement agreement that followed the 1973 Yom Kippur War.

In the Golan Heights, hundreds of Arabs from Syria reported to be Palestinians surged through a part of the border known as the Shouting Hill, so named because Druze relatives on opposite sides of the boundary use it to shout to each other by bullhorn. The few Israeli troops stationed in the area tried to keep the marchers at bay. Shots were fired; as many as four people were reported killed.

As scores surged across the border and into the Druze town of Majdal Shams — near one of the only parts of the border not covered by mines because it occasionally serves as an international crossing point — the Israel Defense Forces dispatched reinforcements and set up checkpoints around the town to catch infiltrators. The infiltrators who were caught were sent back to Syria.

Meanwhile, Israeli troops stationed along the international boundary with Lebanon used live fire to keep back thousands of protesters from Lebanon. At least 10 people were reported killed, some by Lebanese army fire, according to the IDF.

In Gaza and the West Bank, Palestinian demonstrators attacked Israeli checkpoints, and Israeli soldiers responded mostly with tear gas. Demonstrators in Egypt and Jordan also sought to force their way into Israel, but they were held back by local troops.

Eli Malka, head of the Golan Regional Council, called on residents of northern Israel to prepare to take up arms to defend the homeland, warning on Israel Radio: “Sixty-three years on, the War of Independence of the State of Israel is not over.”

Malka described the border breaches as a new form of warfare against Israel: by citizens from neighboring states intent on retaking “Palestine” with their own hands.

On Monday, the Israeli airwaves were rife with talk of how to deter further border breaches, from laying anti-personnel mines along the boundary to mobilizing Israeli residents of border towns against possible infiltrations to bombing Damascus — which many Israelis held responsible for Sunday’s border breach in the Golan.

In Syria, one cannot charter buses to the Golan or approach the border area without the say-so of the regime of Bashar Assad, noted Effi Eitam, a former Israeli Knesset member.

“This was a deliberate provocation,” he told Israel Radio, suggesting that any response should be directed toward Damascus.

The border breach also was seen as a warning by the Syrian regime of what could happen in the region if Assad’s government were to fall. For weeks, Assad’s security forces have been responding to widespread protests against it with deadly violence; an estimated 800 people have been killed.

In contrast to Libya, the subject of a U.S.-led bombing campaign, the Syrian regime has drawn only subdued protestations from Western powers who fear that the collapse of Assad’s rule could herald even more turmoil in the region, including trouble for Israel.

Israeli leaders have kept mostly silent about the unrest in Syria, guessing that the devil they know in Assad would be better than the alternative of a Syria in the throes of anarchy or a militant Islamic government.

Sunday’s violence on the Syrian border should serve as a cautionary tale, Israeli analysts said.

Likewise, the suspected terrorist attack in Tel Aviv by a 22-year-old Israeli Arab from Kafr Kassem who rammed his truck into cars and pedestrians on a busy street, killing one, was a warning that the next Palestinian uprising against Israel might not be limited to West Bank Palestinians.

Indeed, Palestinian media have been rife in recent weeks with calls for a third intifada.

On Monday, Israel was mostly quiet, as the IDF imposed a full closure on the West Bank and deployed in greater numbers along Israel’s borders.

The question now is whether Arabs from the Palestinian-populated territories and Israel’s Arab neighbors will be encouraged or discouraged from their experience on Nakba Day.

When the unrest began spreading across the Arab world this winter, threatening autocratic regimes all around the region, Israel appeared to be an island of stability — a testament to its democratic character and, perhaps, to Israeli security strategy.

Sunday’s border breaches suggest that if Israel doesn’t take effective steps to stanch any unrest along its borders or in the West Bank — with the minimum possible loss of life so as not to inflame the Arab world — the honeymoon might be over.