On eve of Netanyahu visit and AIPAC conference, Obama and Bibi appear on same page 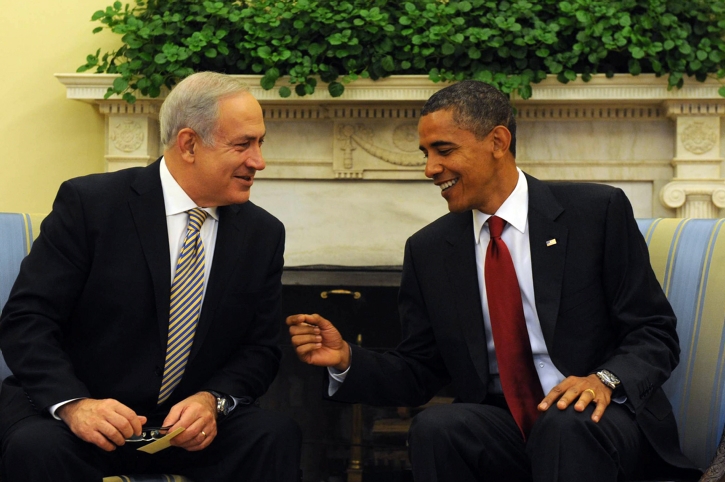 President Barack Obama and Prime Minister Benjamin Netanyahu are scheduled to meet on May 20 at the White House. They are pictured here meeting in the Oval Office on July 6, 2010. ( Amos BenGershom / Government Press Office flash90)
Advertisement

Through quirks of timing, it’s a narrative that President Obama and Prime Minister Benjamin Netanyahu finally can agree on when they meet this week in Washington.

There remains a critical difference, however, between the two over what happens in the next chapter: Keep up the fight or step out and make peace.

The Obama administration, at least by default, seems to have embraced Netanyahu’s longtime mantra that the best way to clear the path to calm is through the elimination of terrorists.

Within two weeks, the administration lost both its bloodiest enemy and its best-known peacemaker: Osama bin Laden, the terrorist leader, died at the hands of U.S. soldiers, and George Mitchell quit his post as the administration’s lead peace broker for the Arab-Israeli conflict.

On May 24, Netanyahu will speak to a joint meeting of Congress, and the theme is likely to be the threat of terrorism faced both by Israel and the United States. He is slated to meet Friday with Obama.

Both leaders are expected to address this year’s annual American Israel Public Affairs Committee conference, which starts May 22.

The conference — the largest annual Israel-related gathering in the U.S. capital — comes just weeks after the announcement of a new unity government between the Fatah-led Palestinian Authority and Hamas, the terrorist group that controls the Gaza Strip. The Obama and Netanyahu administrations have made clear that they believe the reconciliation of the two Palestinian factions will impede peace negotiations with Israel.

Meanwhile, the violence Sunday in Israel and on its borders by Arabs marking the anniversary of the Nakba — the “catastrophe” of Israel’s birth — appeared to strengthen Netanyahu’s resolve to stand tough.

“I regret that there are extremists among Israeli Arabs and in neighboring countries who have turned the day on which the State of Israel was established, the day on which the Israeli democracy was established, into a day of incitement, violence and rage,” he said at the outset of his weekly Cabinet meeting. “There is no place for this, for denying the existence of the State of Israel. No to extremism and no to violence.”

In a separate statement at the end of the day, Netanyahu concluded with a promise and a warning.

“We will continue to defend our borders and sovereignty,” he said. “We must regard the reality with open eyes, and see with what and whom we are dealing.”

Days earlier Tom Donilon, Obama’s national security adviser, had sounded a similar note in how the Obama administration would deal with terrorists, referring to the bin Laden operation.

“Our action sent a powerful message for America’s friends and adversaries: We do what we say we will do,” he said in a May 12 address to the Washington Institute for Near East Policy. “That is an important message that resonates across our other strategic interests.”

The reference to friends, adversaries and “other strategic interests,” as well as the venue — the premier pro-Israel think tank in Washington and a crowd peppered with potential campaign donors — made Donilon’s subtext clear: The Obama administration and Israel are on the same page when it comes to confronting terrorism.

That’s a message likely to be reinforced next week at the AIPAC parley.

The message from the Obama administration was underscored as well by how Donilon made what had been the administration’s mantra until now — the critical necessity of achieving a two-state solution — almost an afterthought in a speech that otherwise was dedicated to confronting terrorism and Iran.

That reference included a dig at the Palestinians for pursuing international recognition through the United Nations.

“An enduring two-state solution can only be achieved through negotiations,” Donilon said. “There are no shortcuts.”

Mitchell’s resignation the next day underscored the administration’s turn away from intensive peacemaking for now.

Joel Rubin, the deputy director of the National Security Network think tank and a former foreign policy staffer for top Democrats, said Mitchell may have been disenchanted by the Hamas-Fatah agreement as well as the determination in Congress to cut off PA funding in light of the pact.

“It’s quite possible he looked at the unity government dynamic and looked at the domestic political environment here and thought it’s very difficult to craft a way forward on that effectively,” Rubin said.

White House officials have said that Obama will deliver a speech Thursday linking his determination to confront terrorism with encouragement for nascent democracies in the Arab world.

Seizing the initiative on terrorism now could allow Obama to press forward later with a bold peace initiative.

Donilon hinted at such a linkage in his speech to the Washington Institute, which shares board members with AIPAC.

“As we have learned in the Middle East, the status quo is never static,” he said. “There are demographic and technological clocks that keep ticking. There is a new generation of leaders who will emerge in the region as a result of the changes that are now taking place. And it is in everyone’s interest that they see that peace is possible.”

Steve Rosen, the director of the Middle East Forum’s Washington Project and a former foreign policy director for AIPAC, said international pressure to advance peace is likely to emerge around August, on the eve of the U.N. General Assembly.

If the Palestinians, as expected, have the votes in support of statehood not only in the General Assembly but in the U.N. Security Council, that would necessitate a U.S. veto. Such a turn of events would discomfit an Obama administration that has made its dedication to arriving at a two-state solution a key plank of its outreach to Europe and the Arab world.

“They pretty much have to veto, but it’s not going to be easy for them,” said Rosen, who blamed the Obama administration for cornering itself with its past insistence on an extended settlement freeze that Netanyahu did not deliver.

One way to relieve the international pressure would be for the Obama administration at around August to again push for talks with the Palestinians, Rubin said.

“That’s a situation where there has to be a triage,” he said, referring to the looming U.N. recognition.

Netanyahu, with the backing of much of the U.S. Congress, has counted out negotiations as long as Hamas is involved with the Palestinian Authority.

What, exactly, Netanyahu is planning — if anything — is not clear, Rosen said.

“I tried to find out where the prime minister was going,” he said. “I was told repeatedly by several aides that they did not know.”