From nut allergies to gluten, Jewish camps and schools struggle with dietary limitations 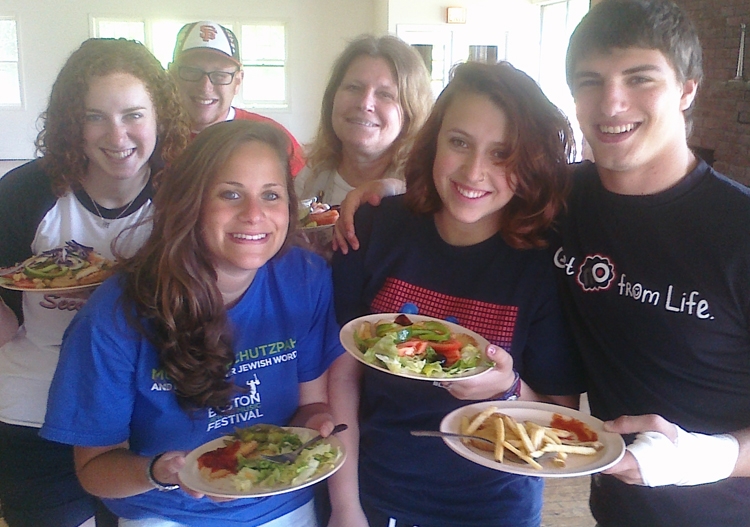 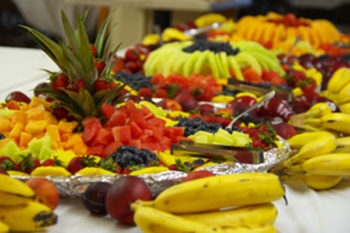 SAN FRANCISCO (JTA) — No one goes to summer camp for the food. And school lunches? Used to be fried mystery meat and a side of bogus mashed potatoes, if you were lucky.

But that was before the healthy eating movement — and allergies — changed how camps and schools across America think about the food they serve their children.

Dining halls now feature salad bars and fresh produce, even homemade bread. The Reform movement’s Kutz Camp, a leadership camp in Warwick, N.Y., for teenagers, is launching a state-of-the-art dining program this summer that has banned canned vegetables and machine-made drinks, and includes a salad bar featuring at least three types of lettuce and 10 vegetarian toppings.

“Parental expectations have changed,” says Paul Reikenbach, head of camping for the Union for Reform Judaism. “They want to have healthy choices and healthy menus. And the kids themselves are much more sophisticated about their food choices.”

Whereas 10 to 15 years ago the battle was for high-quality vegetarian meals, today the preoccupying concern is the ever-increasing array of dietary needs and restrictions.

Nut allergies. Soy allergies. Lactose intolerance. Gluten allergies. Combine them with the vegetarians, the vegans, the organic-only eaters and the varying levels of kashrut observance, and it’s clear that putting food on the table for today’s Jewish children is no simple feat.

At Kutz Camp, the peanut butter and jelly is now kept in a separate area of the dining hall to avoid cross-contamination.

“It’s our responsibility to keep everyone happy and safe,” says camp director Melissa Frey. “If one teen drops a peanut butter knife into the salad bar, it could be very dangerous for someone else.”

“When I started here 24 years ago, we were just learning about lactose intolerance,” says Anne Tursky, assistant executive director of the New Jersey Y Camps. “We heard about Lactaid and dairy-free ice cream. Then came the peanut allergies eight to 10 years ago. We went from having jars of peanut butter on the table to putting out individual packets.

“Then we had a camper allergic to soy, so we had to start reading every package to see what was in them.”

Most of the push for allergy-free meals comes from worried parents.

Johanna Shlomovich, director of student services at the Ramaz School in Manhattan, meets regularly with a parents’ nutrition committee to go over meal planning for the Orthodox day school’s 1,100 students. She estimates that the school prepares 20 specialized meals daily, ranging from diabetic to dairy-free.

“We are nut-free and sesame-free, to keep all our children safe,” she says. “All our food service workers go to allergy training several times a year. They check all the packaging.”

Finding kosher-certified foods that meet the varied health concerns is an ongoing challenge, Shlomovich says. Ramaz could not find a kosher brand of granola that was also free of nuts and sesame, so now the school prepares its own.

“I have a couple of parents pushing for everything to be organic,” Shlomovich says. “But that’s cost prohibitive. It’s always a balance between budget and the parents’ nutritional demands.”

Now there is both greater awareness of allergies and food intolerances, and the actual occurrence of those allergies also is on the rise, experts say.

Anita Redner, the head nurse for the Solomon Schechter Day School of Greater Boston for 19 years, says the number of allergies she sees has skyrocketed along with the incidence of asthma.

“All the medical literature is pretty clear that there’s been an actual rise in real allergies and in asthma,” she says. “I don’t think there’s any doctor that would say otherwise.”

Redner’s school has one student with diabetes, several with gluten allergies and others with similar dietary restrictions. The school does not have a regular lunch program, but allows parents to opt in or out of Friday pizza lunch and infrequent meals brought in from a kosher Chinese restaurant.

“We provide the parents with all the information they need about the vendors, and the responsibility is on them to opt in or have the kids bring their own lunch,” she says.

One of the more serious allergies is to gluten, the protein found in grains such as wheat, barley and rye. Many Americans today tout the supposed health benefits of a gluten-free diet, but for sufferers of celiac disease — an estimated 1 percent of the population — avoiding gluten is not an issue of choice. Even a tiny amount of gluten can trigger a severe autoimmune reaction and sometimes long-term health problems.

Camp and school directors have become hyper-aware of the needs of children with celiac disease. Most ask parents to provide their own food for the children, or in the case of overnight camp, pay for the cost of procuring gluten-free food. But that’s expensive and tends to isolate the affected children.

At some institutions, inclusivity trumps inconvenience. The early childhood classes at Ramaz bake once a week, Shlomovich says, and if even one child is sensitive to gluten, the entire class will bake gluten-free muffins. The same is true of other food allergies.

“Every child must be able to take part and enjoy,” she says.

Kutz Camp always has a handful of campers with gluten sensitivity, according to Frey. Until this year, the camp would buy special food for them. This summer the camp will offer gluten-free pastas as well as other alternatives to foods with gluten.

“We’re an environment based on Jewish ethics and Jewish values,” Frey tells JTA. “We want camp to be a place where no one feels isolated.”

For this summer, the New Jersey Y Camps has partnered with the Celiac Disease Center at Columbia University Medical Center to develop a gluten-free summer sleepaway program at its camp in Milford, Pa. A dedicated kosher and gluten-free kitchen will provide meals and snacks for children and teens with celiac and Type 1 diabetes.

Like other camps, the Y camps always catered to celiac sufferers, says director Len Robinson, but did so by requiring parents to buy their child’s food, which he estimates cost about $1,000 a summer. Now these children will stand in line with everyone else instead of waiting at the table for special meals that often arrived late or cold.

The new program was inspired by Pninit Cole, a Long Island mother and celiac activist whose child was diagnosed with celiac disease three years ago.

“Even with her in the camp, I didn’t fully understand the issue,” Robinson acknowledges. “There are so many other things we have to watch.”

The new kitchen cost $30,000, but the parents won’t pay more in camp fees. It’s part of what a Jewish camp or school should be offering, Robinson says.

Cole agrees. Along with the food has come a change in atmosphere, she notes, where children and staffers learn about dietary needs, healthy eating, and how to respect each other’s preferences and restrictions.

“This is the first such program I know of in the country,” Cole says. “I hope it will become the industry standard, so all kids can have a fun, safe summer.”