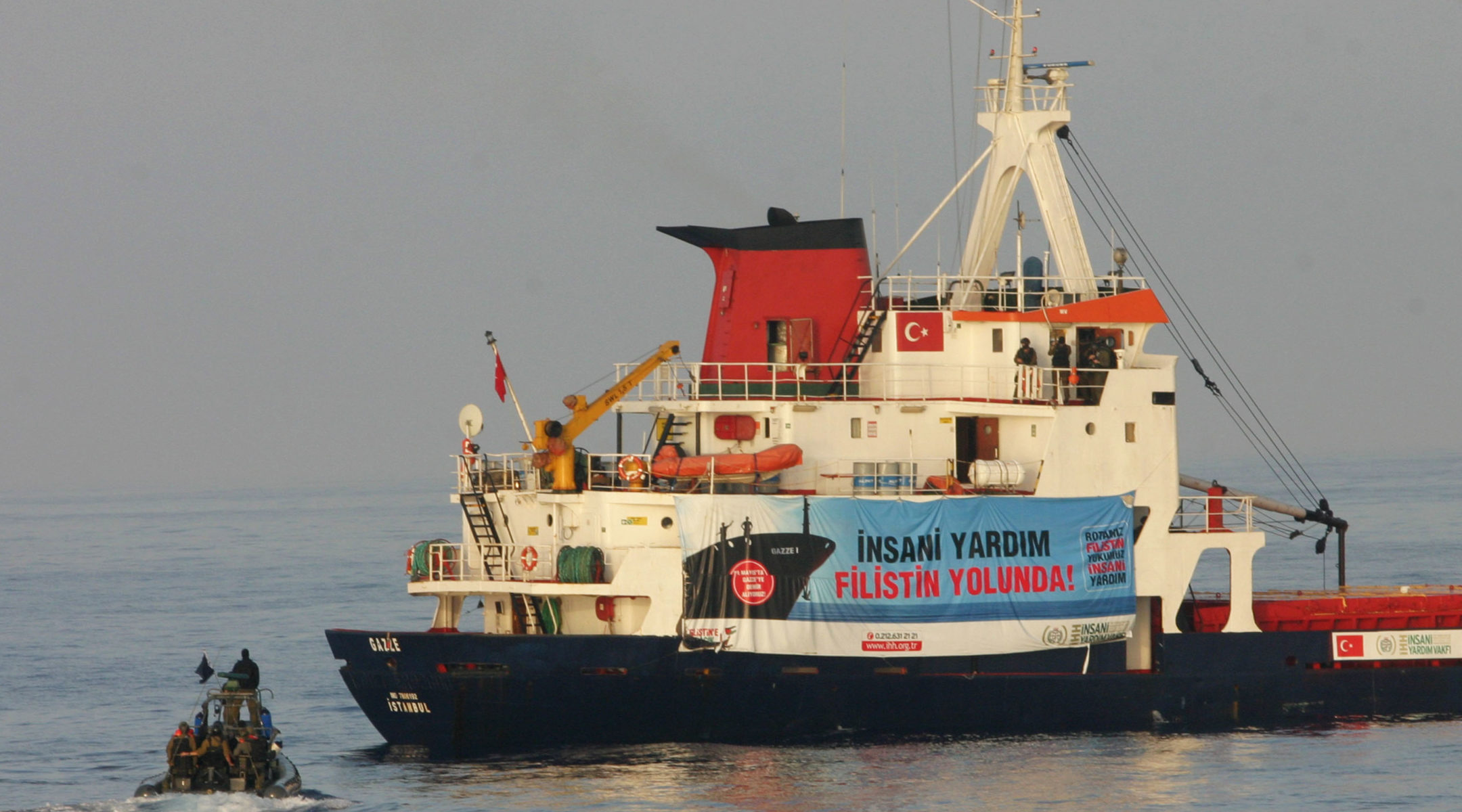 The Israeli Navy, seen here approaching one of the ships from the 2010 Gaza-bound flotilla, clashed with activists aboard the Turkish-flagged Mavi Marmara on May 31 of that year in a confrontation that deepened the Turkey-Israel rift. (Moti Milrod/Flash90)
Advertisement

JERUSALEM (JTA) — Israel’s Navy is preparing to intercept the pro-Palestinian flotilla due to set sail for the Gaza Strip from Mediterranean ports later this week.

Commandos from the Israeli Navy’s elite Shayetet 13 unit have spent weeks preparing to stop the flotilla from reaching Gaza, including practicing new ways to quickly board the ships’ upper decks and how to use water cannons and other non-lethal riot control methods.

The Navy wants to avoid a repeat of  the violence that occurred when Israeli commandos boarded a ship in last year’s flotilla to Gaza. Nine Turkish activists, including a dual Turkish-American citizen, were killed in clashes with the commandos aboard the Mavi Marmara in May 2010.

This year’s flotilla activists, whose stated goal is to break Israel’s maritime blockade of the Hamas-run coastal strip, have attended workshops on the use of passive resistance tactics. The activists also have been trained to transmit information from the ships until the last minute and keep video chips hidden from boarding Israeli soldiers, according to a blog post by flotilla participant Medea Benjamin.

However, a flotilla organizer, Israeli expatriate Dror Feiler, told journalists that flotilla participants have signed a declaration of nonviolence. Feiler said that dangerous chemicals would not be allowed on board flotilla vessels.

“If Israel suspects anyone, it should provide us with information so we can stop him,” he told Israel Army Radio Tuesday morning. “Violent people are not permitted to take part in the flotilla.”

The flotilla is expected to be a smaller version of last year’s, with some 10 ships, including two cargo ships, carrying about 500 activists reportedly set to take part, instead of the at least 15 ships carrying thousands of activists originally planned.

Earlier this month, the Turkish Islamic charity IHH, which helped organize last year’s flotilla with the Free Gaza Movement, withdrew the participation of the Mavi Marmara in this year’s flotilla. The IHH, which is considered a terrorist organization by Israel and the European Union, said the ship did not gain necessary approval from Turkish port authorities for technical reasons.

The flotilla ran into further problems this week.

The departure date of flotilla ships from Greek ports was pushed off from the originally scheduled Tuesday launch due to a nationwide strike. Meanwhile, one ship’s propeller was cut off in what flotilla organizers are calling sabotage.

Several other ships, including the American-flagged Audacity of Hope, do not yet have clearance to leave their ports after thorough port authority inspections — some say more thorough than usual — and in the case of the American ship, an accusation that it is not seaworthy.

After two days of meetings, Israel’s Security Cabinet on Monday ordered the Israel Defense Forces to prevent the flotilla from reaching Gaza, and also directed the Foreign Ministry to continue its diplomatic efforts to stop the flotilla from setting sail. The decision echoes statements made in recent days by Prime Minister Benjamin Netanyahu in which he said that he would not allow flotilla ships to breach the blockade.

Israel has said it will take any humanitarian aid directly to Gaza if the flotilla ships are brought into an Israeli port. Israel also has secured an agreement from Egypt’s interim government to allow the flotilla ships to unload their aid in the El Arish port and take it into Gaza, as the European aid group Miles of Smiles did last week, bringing 30 tons of aid into Gaza after landing in the Egyptian port.

Israeli Defense Minister Ehud Barak on Monday called the flotilla an “unnecessary provocation” and asserted that “there is no humanitarian crisis in Gaza.”

The head of Israel’s Government Press Office had threatened to deny entry to the country for 10 years to any journalist who participates in the flotilla, but the Israeli government quickly backed away from the threat..

Netanyahu on Monday ordered Israeli authorities to formulate a special procedure for journalists who are arrested on board the flotilla, saying that the policy for journalists covering the flotilla should not be the same as against infiltrators and those who enter Israel illegally. Several dozen journalists are registered to sail with the flotilla.

Members of the Israeli media and international journalists will be embedded in Israeli Navy vessels in contact with the flotilla “in order to create transparency and credible coverage of the events,” according to a statement from the Prime Minister’s Office.

Oren Helman, director of Israel’s Government Press Office, had threatened the ban and other sanctions in a letter Sunday to members of the foreign press.

“I implore you to avoid taking part in this provocative and dangerous event, the purpose of which is to undermine Israel’s right to defend itself and to knowingly violate Israeli law,” he wrote.

Meanwhile, the U.S. State Department said in a statement that Americans involved in the flotilla could face fines and jail upon their return. Flotilla participants “are taking irresponsible and provocative actions,” the statement said.

At least 36 Americans are expected to be aboard the planned flotilla, including the Pulitzer Prize-winning novelist Alice Walker.

Walker said at a news conference Monday that she is sailing with the flotilla because African Americans were helped by outside communities when they were slaves and when they were fighting for civil rights.

The United States, Canada and the United Kingdom have issued travel advisories that specifically warn citizens against attempting to enter Gaza by sea.