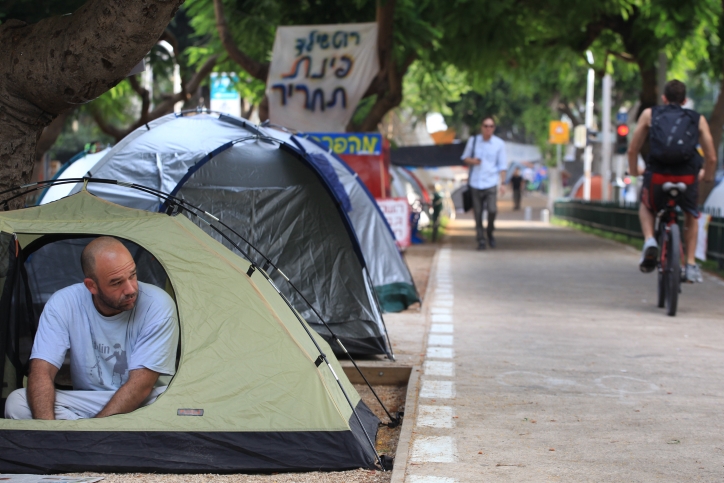 Young Israelis seen near tents set up on Rothschild Avenue in Tel Aviv are pressing the Israeli government to find a solution to the soaring cost of housing, July 26, 2011. (Liron Almog/Flash90)
Advertisement

TEL AVIV (JTA) — On Rothschild Boulevard, Tel Aviv’s version of Park Avenue, a burgeoning tent city has sprung up amid crowded cafes and its canopy of ficus trees.

The squatters are protesting soaring housing prices in the country, and they have galvanized a sudden full-scale national protest, from Kiryat Shemona in the North to Beersheva in the South, that has plunged the government into crisis mode.

Prime Minister Benjamin Netanyahu canceled a planned trip to Poland this week and the interior minister has called for the Knesset to cancel its summer recess. Tent cities are swelling in cities across Israel, protesters are blocking roads and activists have practically besieged the Knesset. On Saturday evening, an estimated 20,000 marchers filled the streets of Tel Aviv calling for affordable housing.

“For years, Israelis have been like zombies because of the security situation and did not speak out when other areas were ignored, like education and the economy,” said Amir Ben-Cohen, a 30-year-old graduate student camping out on Rothschild Boulevard. “Enough. We are a new generation.”

Some are hailing the protests as Israel’s version of the Arab Spring. This Israeli Summer movement is being led by university students and young professionals in their 20s and 30s who until now have shown little interest in demonstrations or activism. One sign strung between tents in Tel Aviv read, “Rothschild, corner of Tahrir,” a reference to the Egyptian uprising that centered in Tahrir Square.

With a recent Haaretz poll showing 87 percent of Israelis supporting the housing protesters, their grievances appear to be striking a chord nationwide.

Like much of the world, Israelis recently have seen cost-of-living metrics rise across the board, especially for food and gas. But unlike in the United States, where real estate prices are in retreat, housing prices in Israel have skyrocketed, on average doubling since 2002.

With the average Israeli salary at $2,500 a month and modest-sized apartments in Jerusalem and the Tel Aviv area selling for $600,000, many Israelis feel priced out of their own neighborhoods, particularly young people who live in places where there is a dearth of rental properties.

“What is very troubling for Netanyahu is that this is not a left wing versus right wing protest. It’s one of the few issues that cuts across all political spectrums,” said Sam Lehman-Wilzig, a Bar-Ilan University political scientist.

He noted that in Israel it’s unusual for socioeconomic issues to take priority over political-security issues.

Netanyahu “is definitely nervous,” Lehman-Wilzig said, “and he should be nervous.”

Netanyahu, who had identified the shortage of affordable housing as a potential crisis when he came to power in 2009, has been busy scolding his own ministers for not doing enough.

“Give me ideas for a solution,” Netanyahu was quoted by the Israeli media telling his Cabinet ministers.

The prime minister announced Tuesday that his government was preparing a battery of solutions, among them plans to reduce bureaucratic hurdles to building new housing projects and measures that would help young people make their first real estate purchases.

He also promised construction of new student dormitories and the construction of 10,000 two- and three-bedroom units, mostly in central Israel, to be earmarked for young couples, large families and students. Half would be available as rentals.

Hours after Netanyahu’s news conference unveiling his plan, the protest’s leaders held their own news conference dismissing the plan as a piece-meal attempt to divide students from other protesters.

“When he talks about students and discharged soldiers, what about our grandparents? What about the disabled?” said Yigal Rambam. “Every section in Israeli society suffers from the housing problem and there isn’t a general solution here. Any real solution must deal with rental prices, the prices of buying land, public housing and housing assistance.”

Itzik Shmueli, head of the National Union of Israeli Students, said at the news conference that although Netanyahu’s plan was “unprecedented” and “historic,” it remained insufficient and that the union would continue participating in the protest.

Experts attribute the vertiginous rise in real estate prices in recent years to a combination of Israel’s small size, relatively high population growth, a strong shekel and an influx of foreign buyers, especially American and French Jews. Demand is strongest in the central part of the country, where most Israelis work and live, though prices in the periphery have risen, too.

In a country that managed to weather the international financial downturn exceptionally well and where 2011 growth is projected to reach an impressive 5.2 percent and unemployment is at a historic low, many Israelis still feel financially strapped. A significant portion of the nation’s private wealth is concentrated in the hands of a few families, the gaps between rich and poor is wider than ever and poverty rates remain among the highest in the Western world.

Israeli hospitals and health clinics are in the midst of a doctors’ strike, which followed a large social workers’ strike. Both groups cited low wages as their reasons.

A boycott last month of cottage cheese to protest rising prices for an Israeli staple appears to have been a symptom of widespread economic discontent that the housing protests also are tapping into.

“Whereas the street has been relatively quiet in the last 20 years, it’s beginning to wake up and demand part of national wealth that does not seem to be trickling down as much as it should,” Lehman-Wilzig said. “It’s not a call to return to Israel’s socialist past but to a more collective feeling of society as a whole.”

While young people in particular are finding their voice when it comes to issues that affect their wallet, this segment of society appears less interested in taking to the streets when it comes to ideological issues like the Israeli-Palestinian conflict.

The demonstrators have said theirs is a nonpartisan struggle. In interviews, they say they don’t want to interject hot-button political topics like the cost of subsidizing home building in West Bank settlements or for haredi Orthodox families at the risk of alienating would-be supporters of their cause.

At a protest outside the Knesset on Sunday, Itay Gottler, who heads the student union at the Hebrew University, spoke of a popular movement.

“This is a struggle that involves secular people, the ultra-Orthodox, religious, Arabs, young people and students,” he said. “This is the struggle of the people.”