With protests, Israelis are seeking the revival of welfare state 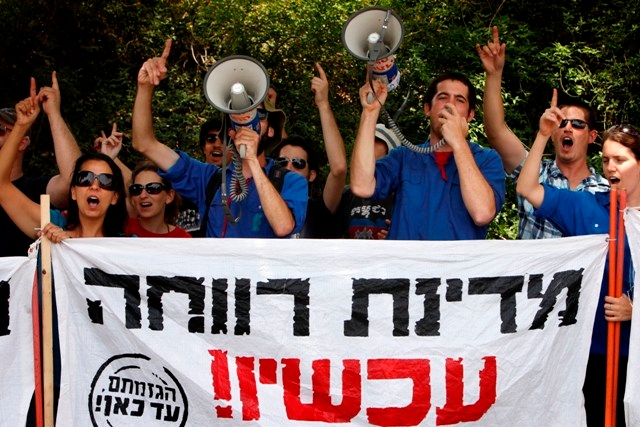 JERUSALEM (JTA) — The wave of protests sweeping Israel is about much more than the lack of affordable housing: It’s a grass-roots demand for the major redistribution of the nation’s wealth.

In social terms, protesters are calling for a more caring government attuned to the needs of young, middle-class citizens who serve in the army, pay heavy taxes and provide the engine driving the country’s burgeoning economy.

In economic terms, it is a call for the reversal of nearly three decades of fiscal conservativism at the expense of social services such as education, health and welfare, as well as an appeal against eroding salaries and rising prices.

In other words, the protesters are demanding that today’s thriving free-market Israel use its wealth to create conditions for a restoration of at least some elements of the long-defunct Israeli welfare state.

As an estimated 150,000 people demonstrated Saturday night in 12 locations across the country, the central theme was a demand for “social justice.” To some, it was reminiscent of the students’ revolt in Paris in the late 1960s: an alliance of students, workers and, in the Israeli case, a large, financially strapped middle class of people mostly in their 20s and 30s demanding a new economic order.

But there were key differences: In the Israeli case, there was no violence. Instead, there was a veiled, largely unspoken threat: that if the government fails to act and middle-class people continue to struggle to make ends meet, many more of the best and brightest would leave for countries where there is no defense burden and it’s easier to make a living.

As the protests entered their third week, the great Israeli paradox loomed large: Never has the country been economically stronger, yet never have so many of its young people felt so frustrated at their own personal financial status.

The current situation is partly a result of a constitutional lacuna.

In the mid-1990s, a number of basic laws were passed — together they are eventually meant to form the basis of a constitution for Israel. One of the laws, on the dignity and freedom of man, enshrined property rights, but a balancing companion act on social rights continues to be held up. It would deal with issues like the right to housing, education, health and welfare, and set parameters of state responsibility for their provision.

The bill again is on the agenda, promoted by Meretz Knesset member Zahava Gal-On.

But the country’s current socioeconomic predicament goes much deeper than any law. It is the result of more than two decades of a virtually consistent small government economic policy.

The turning point came in 1985, with inflation running at over 450 percent per annum. It became clear that Israel could no longer afford to maintain the old-style, government-subsidized welfare state.

The economic buzzword in the 1990s was privatization, started by the Likud, taken on board by Labor and then accelerated by Benjamin Netanyahu. When he first became prime minister in 1996, Netanyahu spoke of a thin man, the private sector, tottering under the weight of a fat man, the public sector, and vowed to turn things around. Netanyahu had a strong ideological commitment to free market forces, privatizing government companies and outsourcing social services.

This meant the accelerated handover of services to the private sector that once were the sole preserve of government. It was accompanied by a weakening of trade unions and an overall erosion of working conditions and salaries.

The result? Owners and a select few mega-salaried executives became richer and the middle class relatively poorer. It also led to the rise of the Israeli tycoons, who controlled a great deal of the country’s wealth and power. Banks, energy companies, supermarket chains and media properties all were concentrated in the hands of a dozen or so billionaire families.

Netanyahu’s economic philosophy also entailed a reduction of corporate taxes. Big companies paid 5 percent to 20 percent income tax, while the middle class saw the prices of everything from food to cars to apartments rise considerably. The system produced impressive economic growth but left wealth in the hands of the few. The trickle-down effect, middle-class Israelis said, had failed to materialize.

The upshot was that by May 2010, Israel’s economy was robust enough for Israel to be admitted to the Organization for Economic Cooperation and Development — the exclusive club of the world’s strongest economies known as the OECD. But Israel also was the OECD member with the biggest gaps between rich and poor.

Some blame preferential spending on settlements in the West Bank for the lack of funds for social services in Israel. Others focus on welfare for the growing haredi Orthodox population in Israel. Still others point to the limited taxation of the tycoons — tax concessions nationwide are estimated at approximately $11 billion per year, about 11 percent of the national budget.

Until now. With terrorism virtually nonexistent and the peace process deadlocked, young Israelis have turned their attention toward generating a mass movement against the socioeconomic system.

Their anti-establishment energy took the form of street protests because there is a strong sense that none of the traditional parties represents their interests, and Israel has a long history of street protests, encompassing everything from Ethiopian immigration to the campaign to release captive Israeli soldier Gilad Shalit.

For the most part, the protests have not been focused. But now the leaders of the protest movement are formulating a list of concrete demands and general principles for change. These are expected to include demands for public housing on a large scale; major tax reforms that would increase taxation of the super-rich and lower indirect taxes on the general public; a shift in budgetary priorities, transferring part of the defense budget and the increased tax money from the rich to fund social services; and demands for Israel to comply with OECD averages when it comes to the numbers of doctors, policemen and firemen per thousand citizens, and the number of children in classrooms.

Netanyahu has set up committees to examine all the relevant economic issues and to negotiate with the protesters, who are likely to be backed by trade union boss Ofer Eini. The prime minister almost certainly will produce a new economic plan, but it may not be enough. What the people are demanding is a new social contract.

The political question is whether this could have an impact on the next election, scheduled for 2013, and the agenda over which it will be fought. That depends on how pressing security issues are around that time and whether these protesters can sustain enough momentum to translate their street movement into real political power.