A big climax to Israel’s summer of protest, but what comes next is uncertain 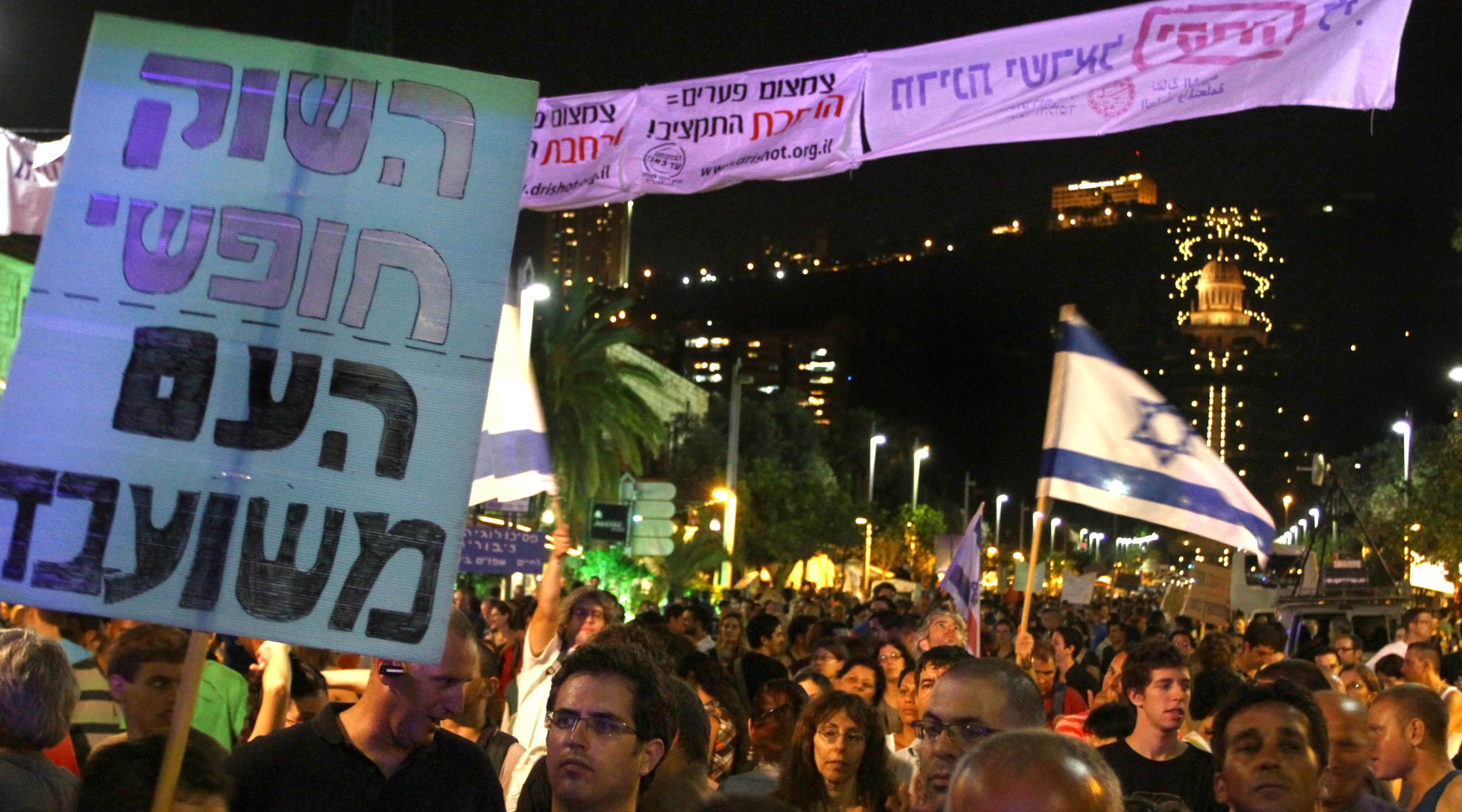 Thousands of demonstrators in Haifa were among the 400,000 people throughout Israel who took part in the largest social protest in the nation's history, Sept. 3, 2011. (Chen Leopold/Flash90 )
Advertisement

JERUSALEM (JTA) — Saturday night’s demonstrations by more than 400,000 Israelis calling for social justice represented a powerful climax to an unprecedented summer of protests and activism.

The nationwide protests, billed as the March of the Million, have been called the largest demonstration in Israel’s history. Whether they ventured out in person — in Tel Aviv, Jerusalem, Haifa and many smaller cities throughout Israel — or watched the protests on television, many Israelis felt galvanized by the mass mobilization.

The next morning, as some protesters headed home after dismantling the tents they had raised in city parks this summer, organizers said the movement was entering a new phase.

For now the country is awaiting the recommendations of the Trajtenberg Committee, a panel of academics, economists and policymakers appointed by Prime Minister Benjamin Netanyahu in response to the protests. The committee will be releasing its suggestions for socioeconomic reforms in the next few weeks.

Yet Israelis are wondering precisely what sort of change will result from the summer of protest. Will it come to an abrupt end with recommendations to cut some budgets and augment others, or will there be a more far-reaching transformation of Israeli politics?

Unquestionably it is the first time that “Israelis got a sense of empowerment that they can change things, that they can get organized and protest in a peaceful way,” said David Nachmias, a lecturer in the School of Government at the Interdisciplinary Center Herzliya. “They want social justice, they want to change public policy.”

How this desire will translate into the realm of politics is an open question. Many signs at the protests assailed Netanyahu and his government, and the leader of the opposition Kadima Party, Tzipi Livni, urged Israelis to attend Saturday’s demonstrations on Facebook. Protest organizers, however, have tried to keep the political world at a distance from their movement in the hopes of appealing to wide segments of the Israeli public.

Several leaders emerged from the tent cities and weekly protests as nationally prominent figures, including Daphne Leef, who was the first to set up a tent in central Tel Aviv to protest her inability to find an affordable apartment, and Itzik Shmuli, the chairman of National Student Union. Both were featured speakers at Saturday’s main rally that drew some 300,000 people to Tel Aviv’s Hamedina Square.

Many observers have pointed to the differences between the two young leaders, which reflect tensions within the movement as a whole. Leef, who tends to speak from the gut, has blasted the Trajtenberg Committee as a cynical effort established to deceive the public. Shmuli, by contrast, has been interested in engaging with the committee and, like other student leaders before him, is mentioned as a natural for entering politics.

Shmuli is “one of the people to look for” as an emerging political leader, said Hani Zubida, an assistant professor of public policy at IDC Herzliya who helped organize a coalition of Israel’s peripheral populations for the summer protests that included single mothers, Arabs and lower-income communities.

“People are calling for his campaign tour for the next primaries,” Zubida said. “The fact that we saw him week in and week out on the stage means something.”

At the same time, says Zubida, nobody is sure what will happen next. He believes that some protest leaders may be co-opted into the current political parties, which could be “extremely beneficial, as it might show that the government is trying to face the challenge and embrace ‘these people’ into the system.”

Nachmias is hoping that the wave of protests results in the formation of a new political party with a socioeconomic agenda rather than focusing on security issues. Israel has been in the midst of a governance crisis, he said, and the government has been unable to formulate and implement long-term public policies, partly because of its electoral system that empowers small parties representing various interest groups.

“People are sick and tired of the governance crisis,” he said. “The speakers were talking about the new Israel, the empowered Israelis. If there is a new political party, that’s the greatest achievement they can have.”

Hebrew University historian Alexander Yakobson wrote in Haaretz that the movement itself cannot be turned into “a political party, or a camp with a clear-cut political and ideological character, without losing most of its participants and all of its public influence.” Yakobson also wrote that while the movement has given a boost to more social democratic economic policies, ultimately change will have to come through the championing of these issues in the political realm.

“The Labor Party, under new leadership, is a natural candidate to carry a banner of this kind, but of course there are also other options and combinations of options,” he said in Haaretz. “The bottom line is that this is a matter for a party or parties. It is clear that the voting public will not vote on the socioeconomic issue alone, but its importance will no doubt increase.”

In the meantime, the public is waiting to see what the Trajtenberg Committee will recommend to ease the burdens facing the middle class.

Expectations are that the panel will call for significant cuts in the defense budget, as well as recommend raising corporate, inheritance and capital gains taxes. The committee also is expected to recommend increases in the education, health and social welfare budgets; lowering income taxes for the middle class; offering tax breaks for working parents; and breaking up the country’s monopolies.

“This is about more than just recommending more competition and doing away with monopolies,” he said. “We need a different vision for Israel.”

Like many others, he would like to see a new political party emerge from the protest movement. As an active participant in the protests, Zubida remarked that the wonder of the tent cities was “everyone was talking to everyone else.” He would like to see the negotiations and discussions that took place in those ad hoc salons continue to happen in different neighborhoods and places throughout Israel.

Protest leaders are trying to keep the dialogue going. Instead of another mass march, 1,000 round tables will be set up Saturday night outside the Tel Aviv Museum of Art for public meetings and democratic discussions of social issues.

“This is a brand new trend,” Zubida said. “It’s the first time in Israel that there are different social coalitions working together. It’s a semi-revolution.”