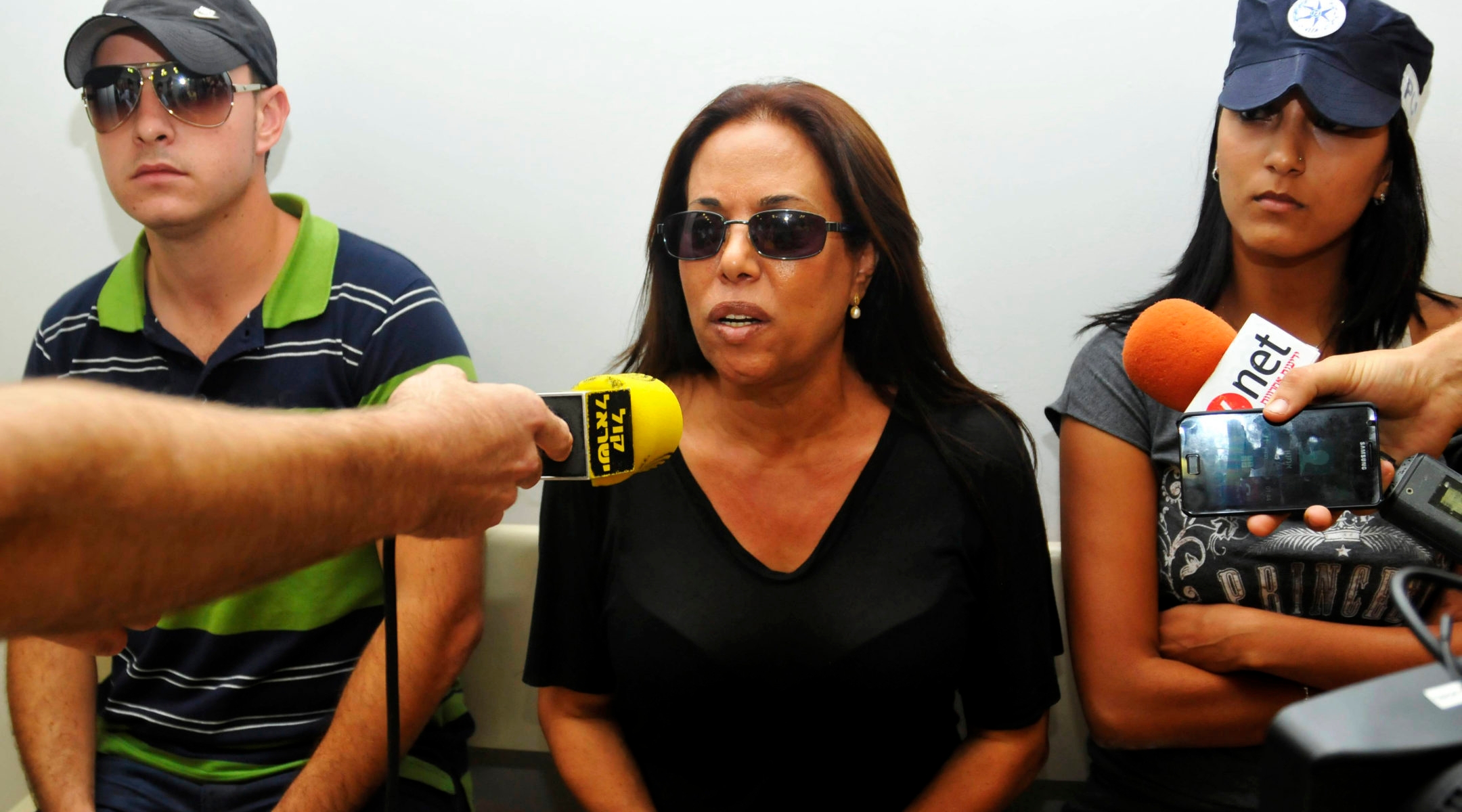 ISRAEL UNDER THE RADAR

Read all about it: Teen’s a hero

Censor and her father, Tslil, saved two victims of a Aug. 20 rocket attack on Beersheba from the information she had gleaned reading a book that her father had given her five years ago about emergency situations. The heroism won her a full scholarship to Ben Gurion University of the Negev.

She and her father, upon hearing the cries of BGU student Lior George, had rushed from their building to help. George, a medical engineering student, and Nati Hachakur, a Beersheba resident, after both had been injured by one of two Grad missiles from Gaza that had hit the southern Israeli city.

Tslil determined that Hachakur had no pulse and worked to help George. But Arina saw Hachakur open his eyes and immediately worked to form a tourniquet out of a stick that she had found and some cloth. The tourniquet held on her third try and prevented Hachakur from bleeding to death, according to a statement from the university.

“The last time I had looked at the book I was 12, but the diagrams just floated into my mind,” she told university President Rivka Carmi after being offered the full scholarship.

“When Nati was brought in to the ER, we took a picture of Arina’s makeshift tourniquet. I want to use it to teach this generation how to improvise materials from what’s at hand,” said Dr. Michael Sherf, director-general of Soroka University Medical Center. “Without their help, Nati would not have made it.”

Prime Minister Benjamin Netanyahu might not feel the love during the day-to-day running of the government, but his new media channels are hot a year after their launch.

The Prime Minister’s Office Facebook page has received 17,400 “likes” since it was started one year ago. More than 7 million web users have viewed the Facebook status updates in Hebrew, English and Arabic, receiving about 47,000 likes and comments from the United States, Israel, Egypt, Canada, Indonesia, the United Kingdom and Germany.

Netanyahu’s YouTube channel registered about 290,000 views, the most popular clip being “Prime Minister Netanyahu’s greeting for the month of Ramadan,” which received more than 80,000 views. Some 60 percent were from Egypt, Saudi Arabia and other Arab countries.

The channel is most popular with U.S. viewers, at 23.4 percent; next is Egypt at 17.8 percent. Israeli viewers comprise 15 percent of viewers, followed by Saudi Arabia, the United Kingdom, Canada, Morocco, Germany, Jordan and France.

The prime minister’s Twitter channel has more than 10,000 followers. Netanyahu sent 773 tweets during the last year in Hebrew, English and Arabic. Some were re-tweeted by approximately 800 followers to millions of additional followers around the world , many of which were quoted on media sites, blogs and other sites.

Netanyahu appointed a veteran publicist and critic of his government’s policies as the spokesman for his family late last week, a day after Israel’s attorney general ruled that he could not use a government spokesman to defend his wife against charges that she was abusing a live-in nurse.

Ofer Lefler, who has panned Netanyahu government policies in his role as a Channel 2 commentator, was retained to represent the family.

Tara Kumari, a nurse from Nepal who took care of Sara Netanyahu’s elderly and ill father, accused the prime minister’s wife of not feeding her, rejecting vacation requests, and verbal and physical abuse.

Meanwhile, Sara Netanyahu charged that the worker stole money from her father’s bank account and neglected him after he fell in her care, which the worker did not disclose.

A couple from Belgium took the long way home to Judaism and Israel.

Chaim (Hans) and Tzipora (Fredrika) Maatjens-Bosmans were living in Belgium when they became attracted to Judaism. With no rabbi in their city, they began walking across the border to Maastricht, Holland, every Shabbat to worship in an Orthodox synagogue.

More than three years ago the couple, who have four children, adopted an Orthodox Jewish lifestyle, including keeping kosher, observing Shabbat and immersing in the mikvah. Rabbis they contacted in Europe could not convert the couple, so they turned to the Israeli organization ITIM-The Jewish Life Information Center, to help them convert in Israel.

ITIM director Rabbi Seth Farber was able to make a special arrangement with the Israeli Chief Rabbinate, necessitating the couple to check in every few months with the rabbinical court over the last  three years.

After countless trips, hearings and meetings, the couple was summoned to the rabbinical court and converted in July, with the caveat that they immediately have a Jewish marriage ceremony, despite the fact that it was the Three Weeks, a time of mourning for the Jewish people.

Within 24 hours, more than 50 people gathered in Raanana for a wedding in Farber’s backyard. The couple has settled in Raanana and is working in Tel Aviv.

Israeli submarines will be taking tiny Torah scrolls with them to the bottom of the sea.

Several religious soldiers have joined the Israeli Navy in recent months. Just as every permanent Israel Defense Forces base has a Torah scroll to be read on Shabbat, Mondays and Thursdays, the military realized that it was time to place them on their subs.

The IDF turned to a family that has donated scrolls to bases in the past and asked it to donate Torah scrolls for Navy subs, Ynet reported. But with the limited space on a submarine, the Torah scrolls had to be small. The first submarine Torah scroll is scheduled to be completed in the coming days, according to Ynet, and will be one-fourth the size of a standard one — small enough to fit in a shoe box.

The scroll will be transferred from submarine to submarine based on demand, according to Ynet. A rabbi with a high security clearance will be required to bring the Torah to the sub, Ynet reported.

The city of Kfar Saba has installed libraries at bus stops on its main street. Passengers can grab a book while waiting for the bus, read it while riding and return it to the bus stop where they get off. They can also take the book home and return it the next time they ride the bus.

The city’s library, which is filling the shelves with books in several languages and genres, is not keeping a record of who borrows the books and whether or not they have been returned, Ynet reported.

New books are reportedly are appearing on the shelves as riders appear to want to share their favorites with fellow travelers.

Student on the fast track

Michael Spivak, 28, an amateur athlete and student at Hebrew University, wanted to prove his theory that the capital’s new cross-city train was slow, so he decided to race the train at a “not-so strenuous jog,” he told Ynet. Despite his leisurely place for the entire 8.5-mile route, Spivak arrived at the end of the line four minutes ahead of the light rail, according to Ynet.

The light rail, 12 years in the making, opened to great fanfare about three weeks ago. It will be free for the first months of its operation,.

A criminal is born?

Margalit (Margol) Tzanani, a judge on “A Star is Born,” has been accused of throwing her vote on the popular Israeli television show.

During an investigation of Margol, as the well-known singer is known throughout Israel, in an alleged extortion plot of her manager involving a local crime syndicate family, it was revealed that she had allegedly changed her vote on the show.  Apparently the crime ring sent Margot a text message during a live broadcast to vote for its favored contestant. The show’s producers said Margol’s actions did not harm the final outcome.

Margol remains under house arrest after being charged last month with extortion and conspiracy to commit a crime for allegedly hiring figures from the syndicate family to threaten her manager over profits she believed that she was owed. Margol allegedly brought a contestant that was voted off “A Star Is Born” to her manager in exchange for a share of the profits made in representing the young singer.

In another alleged venture with the crime ring, Margol was to recruit the show’s finalists to a new PR firm run by the ring, and to advise them how to get out of their contracts with the production company of “A Star Is Born.” Police intervention foiled the prospective venture.