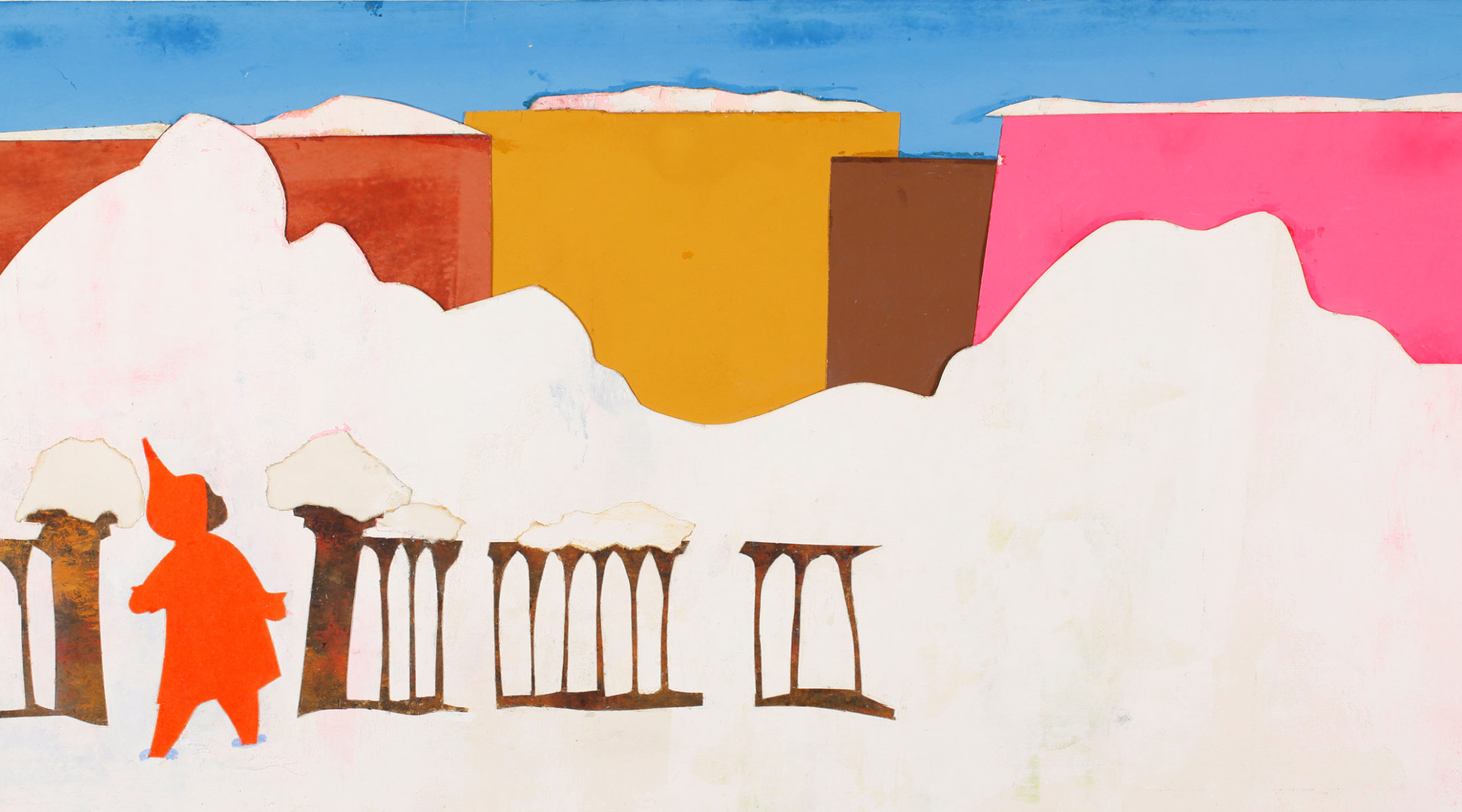 NEW YORK (JTA) — Fifty years ago, during the height of the civil rights campaigns, the publication of a picture book changed American children’s literature.

“The Snowy Day” was about the delight of a young African-American boy named Peter as he experienced the wonder of a freshly fallen snow storm in the city streets of his neighborhood. It marked one of the first times that a black character was the protagonist of a children’s book, and it won wide acclaim, including the 1963 Randolph Caldecott Medal awarded annually to the artist of the most distinguished American picture book.

The book’s author and illustrator, Ezra Jack Keats — born Ezra Jack Katz in 1916 — was the son of Jewish immigrants who grew up in a poor, deprived section of East New York, a largely Jewish immigrant neighborhood of Brooklyn. Keats was a self-taught artist, and his book was striking for its urban setting, bold blocks of color and imaginative use of collage.

Now Keats, who went on to write and illustrate six more books featuring Peter and illustrate dozens of other books, is the subject of a new exhibition that will be traveling to museums across the United States over the next two years.

Focusing on Keats’ Jewish background and the influence of his immigrant neighborhood, the exhibit opened Sept. 9 at The Jewish Museum in New York.

The exhibit offers a rare opportunity to see the inspiring body of work Keats created and the groundbreaking role he played in breaking down racial prejudice and stereotypes in children’s literature. A companion catalog, “The Snowy Day and the Art of Ezra Jack Keats,” by Claudia J. Nahson, was published recently by Yale University Press.

“Keats’ work in children’s literature transformed the field,” Nahson, who is the curator of The Jewish Museum, told JTA in an interview, as no one was showing minority or black children in picture books at the time.

Even today, many of those familiar with Keats’ books assume he was black, she added.

After “The Snowy Day,” which is included in “100 Best Books for Children” by Anita Silvey, Keats wrote books that more fully explored the issues that dominated his childhood. By the time of his death in 1983, Keats had illustrated more than 80 books, 22 of which he had written. Keats’ books have been translated into Japanese, French, Spanish, Korean and Chinese.

In the more than 80 paintings and other original material included in the exhibit, Keats’ artistry leaps beyond the illustrations reproduced in his books and reveals the power and luminosity of his unique blend of painting and collage. The works in the exhibit come from the collection of the de Grummond Children’s Literature Collection at the University of Southern Mississippi and was funded by a grant from the Ezra Jack Keats Foundation.

During the many years Keats spent illustrating the books of other writers, he was struck by the absence of African-American children.

“My book would have him there simply because he should have been there all along,” Keats wrote in an article referenced in the exhibit’s catalog.

A few critics at the time asserted that except for the color of Peter’s skin, the issue of race was absent, or that Keats’ depiction of Peter’s mother was stereotypical. But overall the public’s response was quite positive.

Keats’ influence cannot be overstated. Jerry Pinkney, an award-winning black artist and children’s illustrator and writer, told JTA that Keats’ books were significant in the raising of his four children. During the 1960s, he said, there were few children of color in books being published. Keats’ works were a turning point, he said.

Pinkney said Keats’ work is reflected in scenes in today’s playgrounds in urban areas, where you see children of all backgrounds, just as in Keats’ paintings. He will speak about Keats on Oct. 17 at The Jewish Museum.

Situating his characters in urban, sometimes gritty landscapes was an important and pioneering aspect of Keats’ work, Nahson said.

The streets on which those landscapes are based is the Jewish ghetto of Keats’ childhood, said Martin Pope, a childhood neighborhood friend of Keats and president of the Ezra Jack Keats Foundation, a nonprofit organization founded during Keats’ lifetime that supports educational programs for schoolchildren. Pope’s daughter, Deborah, is the director of the foundation.

Pope recalled when he and Keats would walk between two libraries bordering their neighborhood and spend time in New York’s Thompson Square Park listening to speakers rail against social injustice and inequality — issues that later became prominent themes in Keats’ books.

Keats’s family life was harsh, Pope recalled. His father, who died the day before Keats graduated from high school, disapproved of Keats’ pursuit of art. His mother, while occasionally encouraging, was emotionally removed, he said.

During his years at Thomas Jefferson High School, Keats won a national competition for a painting titled “Shantytown,” reminiscent of the paintings by Honore Daumier whom Keats so admired. But even with art scholarships, Keats could not afford to attend art school.

“At the time we were both completely convinced that there was no future for either of us,” Pope told JTA.

It was the depths of the Depression, a time when there was little hope that young Jewish men from poor neighborhoods could succeed in art or science, he said.

Improbably, they did succeed. Keats served during World War II as a camouflage artist, later studying art briefly in Paris. Upon returning to New York, he began illustrating for magazines such as Reader’s Digest, The New York Times Book Review and Collier’s. But it would be 20 years before Keats wrote and illustrated his own first book.

One of the characters that appears in several of Keats’ later books, Barney, is based on a pious Jew from the author’s East New York neighborhood, a junk peddler they called Tzadik. While Keats was not religious, Nahson says she sees in Keats’ writing and art an admiration for Tzadik’s ability to rise above despair and stick to his religious convictions.

While Keats wrote profusely in unpublished autobiographical notes, he did not address his decision to change his name from Katz, Nahson noted. At the time, many American Jews were Anglicizing their names.

Keats’ lesser-known books and paintings are also part of the new exhibit, including those that reflect his interests in Japanese life, culture and the haiku form of poetry.

(The exhibit runs at the Jewish Museum in New York through Jan. 29 before moving on to the Eric Carle Museum of Picture Book Art in Amherst, Mass.; the Contemporary Jewish Museum in San Francisco; and the Akron Art Museum.)