Kay Granger and Nita Lowey, the congressional couple that’s odd for getting along 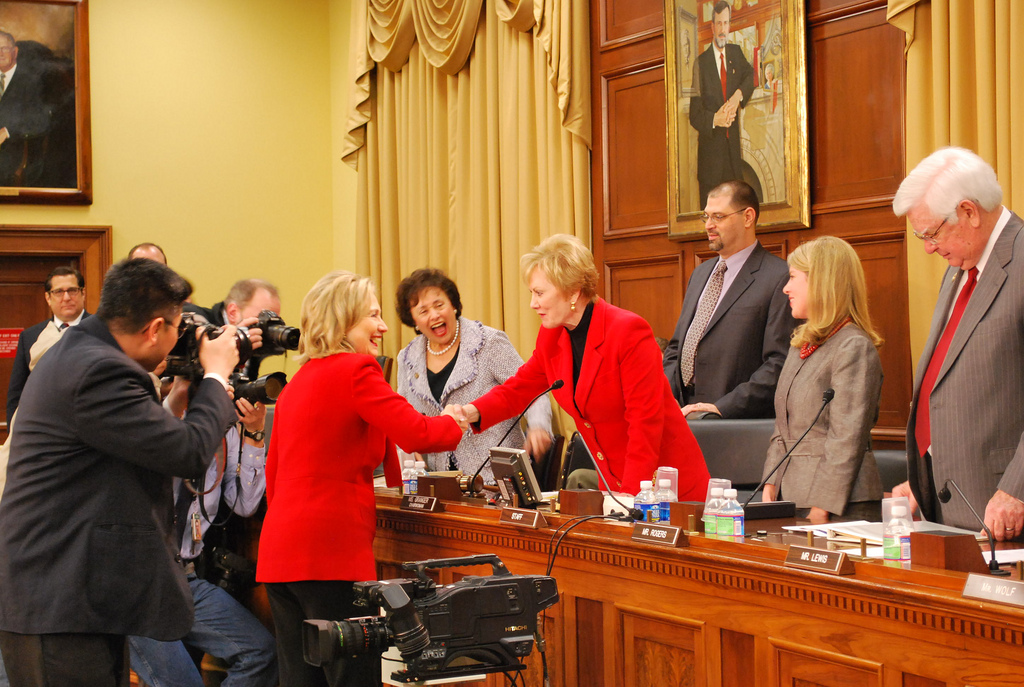 WASHINGTON (JTA) — In any other town at any other time they would be a boring, if worthy, pair: Wonkish grandmothers sorting through nitty-gritty foreign policy and budgetary details to keep their country influential and safe.

But in Washington at a time of intense partisan rancor, the friendly and productive relationship between Reps. Kay Granger (R-Texas) and Nita Lowey (D-N.Y.) is decidedly odd.

Granger and Lowey, the top foreign appropriators in the U.S. House of Representatives, are being noticed for what was commonplace a decade or so ago: focusing on areas of bipartisan agreement in order to get a bill passed, and agreeing to disagree on the rest.

“It’s pretty unique, especially given all the partisan problems that take place every day — it’s extraordinary,” said a top staffer with a leading pro-Israel group, speaking on condition of anonymity.

Granger, the chairwoman of the House Appropriations Committee’s subcommittee on State, Foreign Operations, and Related Programs, and Lowey, the subcommittee’s ranking member, are striving to get the annual foreign operations bill onto the floor for consideration by the full House.

Yet the odds can seem as if they are stacked against them. Last year the same bill was felled, like most appropriations, by partisan disagreement, and foreign spending was wrapped ultimately into a last-minute omnibus spending bill.

“Current and future aid will be jeopardized if you abandon direct negotiations and continue your current efforts,” the lawmakers wrote in a July 11 letter to Mahmoud Abbas, the first of two written to the Palestinian Authority president.

Granger also raised the warning in a meeting she had with Palestinian leaders in August during a visit by Republican lawmakers to Israel and Palestinian-controlled areas. Even though Lowey was absent from the meeting, Granger made sure that she was present in spirit, taking care to tell the Palestinians that her Democratic colleague had her back.

Lowey, who is Jewish, and Granger emphasize their reluctance to cut Palestinian funding, although they say they might not have a choice.

“We have taken a very tough position on abandoning the peace table,” Granger said. “But we recognize that there is funding that affects Israel and the Palestinians.”

Granger and Lowey have been responsive to appeals from the Israeli defense establishment to maintain funding for the Palestinians as a means of ensuring stability. In contrast, Rep. Ileana Ros-Lehtinen (R-Fla.), chairwoman of the House Foreign Affairs Committee, has said that her primary responsibility is to American taxpayers who oppose funding entities that act counter to American interests. The Palestinians receive $500 million to $600 million a year in American aid.

The congresswomen, their colleagues and the pro-Israel lobbyists who work with them attribute the comity to several factors. Some say there’s an occupational factor at work: Appropriators, insiders explain, are less prone than others in Congress to bomb throwing because their rhetoric and bill writing have immediate and real consequences.

“House appropriators act far more responsibly than authorizers,” said one staffer for a pro-Israel group that advocates for strong U.S. involvement in the Middle East. “Authorizers” refers to those committees that set out the overall parameters for spending; appropriators, who decide actual spending, have greater influence.

“[Appropriators] have to get things done or the government shuts down,” the staffer said. “The cooperation and collegial relations between Lowey and Granger are emblematic of this.”

Beyond professional considerations, Lowey and Granger are friends, too. The two have similar personalities, albeit from different backgrounds: Granger, 68, was born in Greenville, Texas, a small town not far from Fort Worth, and raised as a Methodist. Lowey, 74, is from the Bronx, N.Y., and now represents parts of suburban Westchester and Rockland counties, and was active in national Jewish groups before running for Congress.

“They clearly get along. You can tell when they’re together,” said a top Democratic staffer.

Their friendship was in evidence when they finished each other’s sentences at a joint appearance in May at the annual American Israel Public Affairs Committee policy conference.

Each woman has a habit of invoking the other’s name in stating policies.

“Both Kay Granger and I still hope that direct negotiations between the Palestinian Authority and Israel will happen as soon as possible,” Lowey told JTA.

Lowey quietly encouraged the GOP leadership to make the appointment. She had noticed Granger’s work on the defense subcommittee and admired her detail-oriented seriousness.

“I made the point that she would be an excellent ranking member,” Lowey said. Then, alluding to last year’s GOP sweep, which reversed their roles, she joked, “Let me also add, I like her better as a ranking member.”

Once Granger was on the subcommittee as its top GOP member, Lowey made sure to invite her to every briefing by administration staffers and foreign dignitaries.

“She was very gracious and generous with meetings,” Granger told JTA. “If someone would call, she would invite me.”

The congresswomen talk with one another at least once daily and meet every several days. They also travel together.

“We have a good rhythm of the amount of work and the amount of communication that is needed to keep a relationship like that going to make sure we don’t have surprises,” Granger said.

“We talk about grandkids, we talk about food and what she cooks,” Granger said. “She cooks for family, for 20 or 30 people on the big Jewish holidays. I don’t cook, and I love to hear about what she’s planning.”

Granger’s moderation is also a factor. Following a popular mid-1990s stint as mayor of Fort Worth, she was courted for a congressional run by both parties. In the 2008 Republican primaries, she endorsed Mitt Romney, the moderate former Massachusetts governor, for the presidency.

Unlike much of the current GOP class, Granger talks up what she says is the critical role of foreign aid in maintaining U.S. influence and leverage in securing American interests and combating terrorism, even when it is directed to countries that have clashed diplomatically with the United States.

“These issues are not partisan issues,” the Texan said of maintaining U.S. influence abroad.

Lowey, too, does not march lockstep with Democratic policies. At the AIPAC conference, she joined Granger in expressing skepticism about Obama administration plans to plow money into post-revolution Egypt.

The key to maintaining a productive relationship, both lawmakers say, is knowing how to agree to disagree on such issues and to work in areas where they have much in common.

Lowey suggested that these skills may come easier to women, offering up a theory for their subcommittee’s status as a redoubt of bipartisan comity on Capitol Hill.

“Maybe it’s because it’s the only committee in Congress with a female chair and a female ranking member,” Lowey said.