Grapel, freed in prisoner exchange with Egypt, reunites with mother 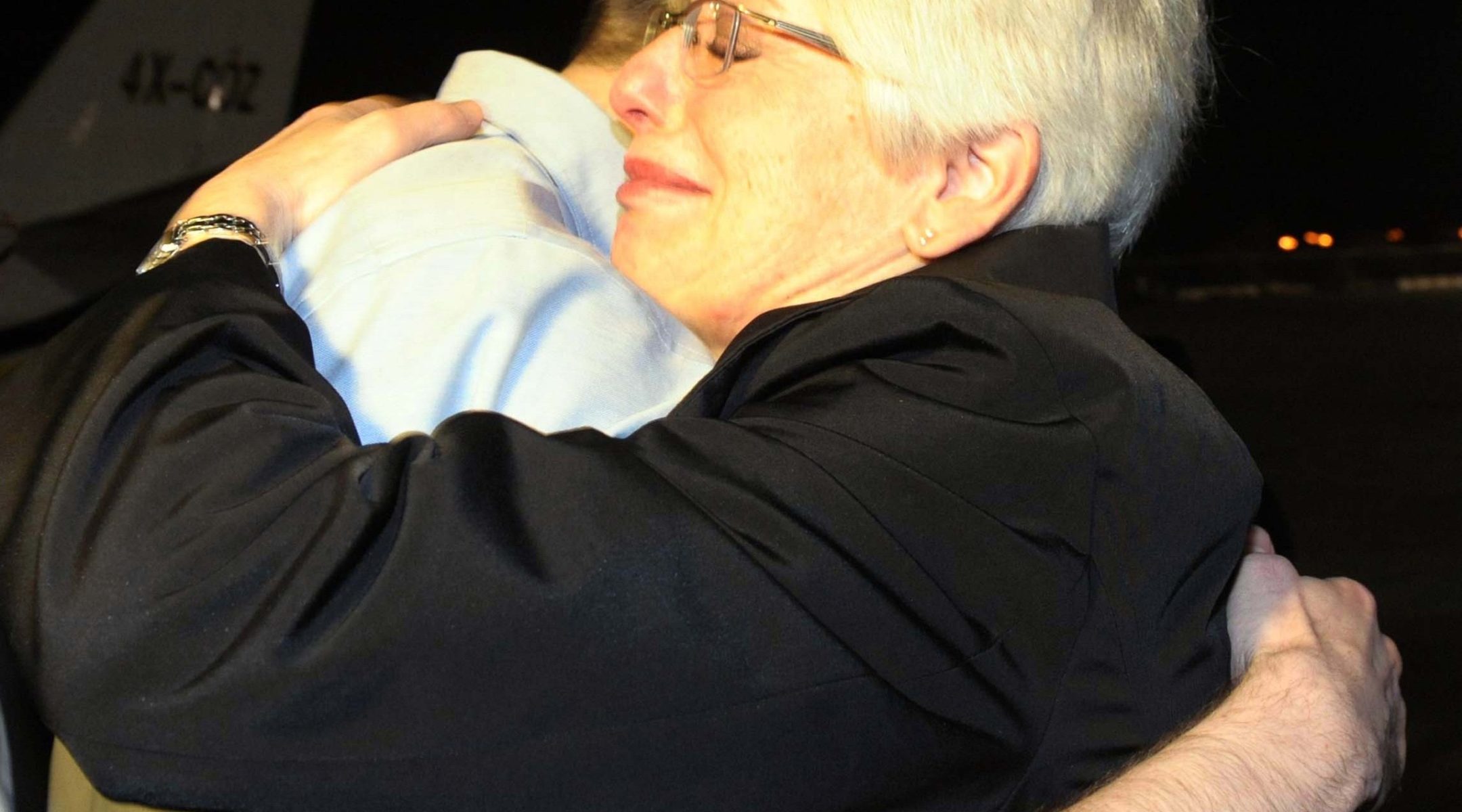 Ilan Grapel embraces his mother, Irene, as he arrives at Ben Gurion International Airport in Israel following his release from Egypt in a prisoner exchange, Oct. 27, 2011. (Avi Ohayon/GPO/Flash 90)
Advertisement

JERUSALEM (JTA) — Dual American-Israeli citizen Ilan Grapel was reunited with his mother in Israel after being freed by Egypt in a prisoner exchange.

Grapel landed in Israel from Egypt Thursday evening and hugged his mother, Irene, a New Yorker, at Ben Gurion Airport outside Tel Aviv. He then met with Israeli Prime Minister Benjamin Netanyahu, who shook Grapel’s hand as both men smiled.

Grapel, who has been held in Egypt since June and accused of being a spy, boarded the plane after 5 p.m. Thursday with Israeli lawmaker Israel Hasson and attorney Yitzhak Molcho, who helped broker the prisoner exchange between Egypt and Israel. Grapel had been handed over to Israeli authorities in Egypt several hours earlier.

While Grapel was being freed, 25 Egyptians who had been released from Israeli prisons crossed theTaba border crossing into Egypt. The Egyptians released in the Grapel deal, including three minors, are criminal and not security prisoners, according to the Prime Minister’s Office.

U.S. Rep. Gary Ackerman (D-N.Y.) arrived in Israel late Wednesday to escort Grapel back to his parents’ home in New York, a statement from his office said. Grapel’s parents are Ackerman’s constituents and Grapel worked as an intern for the congressman.

Ackerman’s office said that the congressman had “personally” intervened with the Egyptian Supreme Council of the Armed Forces, the prime minister of Israel and the U.S. State Department to secure Grapel’s release.

Grapel, who has refuted the spying charges, is scheduled to be debriefed by Israeli defense officials before he leaves for New York.

The United States on Thursday evening denied Arab reports, including in the Palestinian news agency Maan, asserting that the United States, which was heavily involved in the prisoner swap negotiations, agreed to sell to Egypt several F-16 fighter planes in order to grease the wheels of the swap.

Grapel, arrested in Cairo in June, was accused of espionage. Later he was accused as well of incitement and the attempted arson of the country’s Interior Ministry building and police headquarters in Cairo during January’s riots in the capital.

The agreement comes slightly more than a week after captured Israeli soldier Gilad Shalit was exchanged for more than 1,000 Palestinian prisoners in an agreement reached with the terrorist organization Hamas.

Egyptian security officials said Grapel entered the country shortly after the start of the Jan. 25 uprising that led to the resignation of President Hosni Mubarak and posed as a foreign correspondent. A law student at Emory University, Grapel allegedly said he was Muslim on the visa application that he filed with the Egyptian Embassy in Tel Aviv and then entered Egypt using his American passport.

Grapel moved to Israel following his graduation from Johns Hopkins University in Baltimore, served as a paratrooper during the Second Lebanon War and was wounded in Southern Lebanon in August 2006.