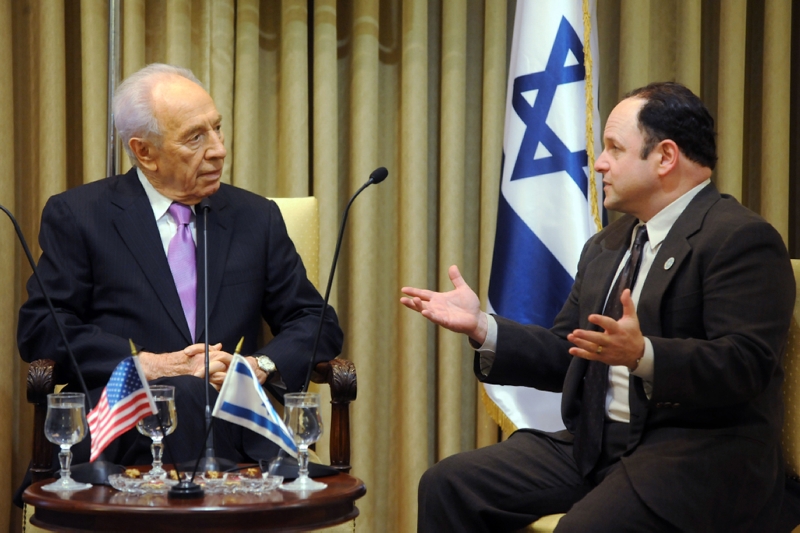 ,” there was something comic — if not downright ridiculous — in seeing actor Jason Alexander being asked by an elder statesman of Middle East diplomacy about making peace between Israelis and Palestinians.

But that was the scene last week at the Israeli president’s residence in Jerusalem, where Shimon Peres asked the actor — born Jay Scott Greenspan in New Jersey — if he had any advice to impart.

“Sure,” Peres said, as if he regularly asked Hollywood stars how to resolve regional conflicts.

“The best advice is to not give up,” Alexander said. “There’s been so much disappointment. But there are wonderful people who are working very hard in both communities.”

Alexander was in Israel with a delegation from One Voice, a grass-roots organization promoting a two-state solution to the Israeli-Palestinian conflict. The actor has been involved with the group for about a decade and serves on its “entertainment council” along with other bold-faced names such as Natalie Portman, Paul McCartney and Danny DeVito.

During his trip, Alexander met with political leaders, granted interviews to Israeli media and promoted One Voice’s work in engaging moderates on both sides. He also visited the rocket-bombarded southern city of Sderot.

Alexander made clear that the solution to the Middle East conflict wasn’t going to come from him — or any outsider, for that matter.

They do ask if they can call him George, though, which isn’t entirely surprising.

Alexander is one of those actors so closely identified with his character that it was easy to imagine a blundering Costanza engaging in a little freewheeling Mideast diplomacy. Even Peres asked if he could address Alexander as George.

“You can,” Alexander replied. Then, gesturing to the media, he added, “Not them.”