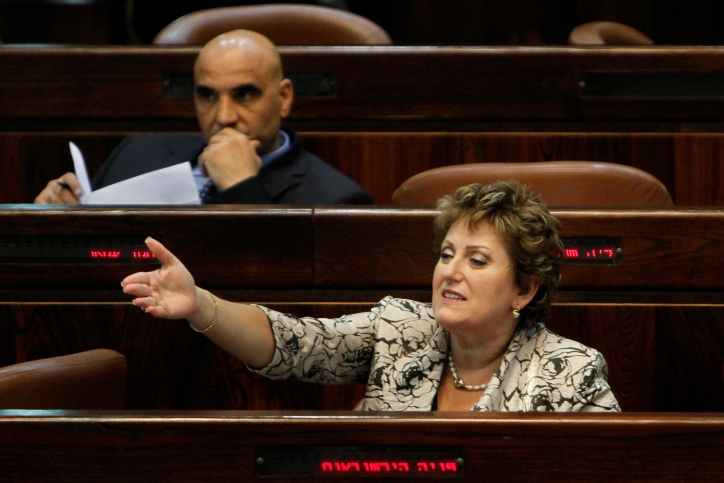 JERUSALEM (JTA) — Two bills now making their way through Israel’s parliament have unleashed a firestorm of criticism from opponents who say the measures tear at Israel’s democratic fabric and are aimed primarily at squashing the work of human rights groups and other progressive nongovernmental organizations.

The bills, which have the support of Prime Minister Benjamin Netanyahu, passed the Knesset’s Ministerial Committee for Legislation on Sunday by a vote of 11 to 5. After an appeal by opponents led by Likud Party minister Benny Begin, they were referred to the full Cabinet for consideration.

One bill, introduced by Likud lawmaker Ofir Akunis, would ban political organizations in Israel from receiving donations of more than 20,000 shekels (about $5,000) from foreign governments and international groups. The other, initiated by Fania Kirshenbaum of the Yisrael Beiteinu party, would tax the organizations at a rate of 45 percent on all revenue provided by a foreign government.

“This proposed legislation treats Israel’s friends as enemies and those committed to human rights as accomplices in terror,” said Arye Carmon, president of the Israel Democracy Institute, an independent think tank. “This has no place in the democratic world.”

But prononents of the measures say the point is to limit foreign interference in the country’s internal affairs.

“It is hard for me to think of a single Israeli who would tolerate money transfers from Israel’s budget to support political organizations in Britain, Holland or France,” wrote Ofir Akunis in an Op-Ed in the daily Israel Hayom. “As a sovereign state, Israel is entitled to handle domestic and foreign affairs according to what it sees fit, and according to what the Israeli voter expresses at the ballot box. If countries such as Britain and France want to disagree with Israel’s policies, they have acceptable diplomatic channels at their disposal to do so.”

On Sunday, Netanyahu said he wants to amend a number of clauses in the bills, Haaretz reported. The changes are likely to include raising the proposed cap for financial contributions and distinguishing human rights groups from purely political ones.

The bills are in part a reaction to the report of the Goldstone commission, the U.N. panel that investigated the 2008-09 Gaza war with help from some Israeli NGOs. The government refused to cooperate with the commission, which accused Israel of war crimes and possible crimes against humanity. Richard Goldstone, the South African jurist who led the commission, later backed away from some of the charges.

“These two bills are a severe affront to Israel’s democratic character and part of a larger effort on the part of specific MKs to curtail the work of human rights and social change organizations whose agenda and/or activities differ from their political views,” the Association for Civil Rights in Israel said in a position paper distributed twice to lawmakers before the vote. ACRI gets 15 percent of its funding from abroad.

“Instead of presenting and defending their disagreements with Israeli policy in public, according to accepted diplomatic procedures, the EU and individual European governments seek to exert pressure via massive funding for highly politicized Israeli NGOs,” Steinberg said.

“The activity of these NGOs largely takes place outside of Israel, through lobbying and campaigning in the U.N., legal bodies and college campuses. This has created a self-fulfilling prophecy,” he said. “The more that Europe seeks to prevent the Israeli debate on the impact of these NGO campaigns that it funds, the more resentment this creates among the public, resulting in more legislative initiatives.”

European governments spend more per year on left-wing Israeli and pro-Palestinian groups than their total contributions to nonprofit human rights groups in other countries in the Middle East, Steinberg told The New York Times.

However, NGO Monitor stopped short of supporting these new bills, saying that Israel instead should enforce the NGO Funding Transparency Law the Knesset passed last February.

A broad swath of lawmakers from across the political spectrum has voiced opposition to the bills. Along with Begin, Likud ministers Dan Meridor and Michael Eitan voted against the bills, as did Shalom Simhon and Orit Noked of Ehud Barak’s Independence Party.

Opposition leader Tzipi Livni said she and the opposition would fight the proposed legislation.

“This government, acting out of trepidation, fear and self-preservation, has been passing a string of bills that are meant to shut mouths,” Livni said. “Israel is strong enough to not have to shut mouths and be the kind of country in which everyone can voice their opinions, even if we don’t appreciate it.”