Chanukah in Israel: Sufganiyot on the streets, burning lights and family fun 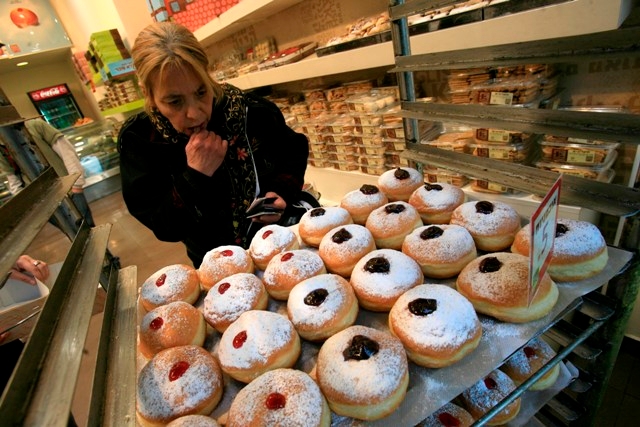 A woman on King George Street in Jerusalem appears perplexed picking from the array of sufganiyot choices for Chanukah. (Nati Shohat/Flash90)
Advertisement

JERUSALEM (JTA) — They’re making sufganiyot on the streets of Israel; Chanukah must be near.

Actually it started feeling like Chanukah here about two days after Sukkot, when the first vendors started frying the delicious and caloric doughnuts in vats of oil in front of bakeries and on the street in towns throughout the country.

As malls in America rush the Christmas season by putting up decorations right after Halloween, some vendors in the heart of Jerusalem were making sufganiyot in the middle of Sukkot.

I spend the weeks until Chanukah checking out the sufganiyot offerings — jelly, chocolate, custard, you name it. At a rumored 1,000 calories each, I can only allow myself one or two throughout the whole season, so they had better be good.

One of the highlights of my family’s Chanukah is our annual venture to a fancy coffee shop for sufganiyot and hot cocoa (for the kids, coffee for me). Last year’s offerings included sufganiyot filling with flavors such as champagne, taffy and pistachio.

But Chanukah in Israel is not all about sufganiyot. With the kids out of school for a week, family fun rules. Workplaces mostly stay open, but stay-at-home moms and parents who manage to get some end-of-the-year time off do not want for kid-friendly activities during Chanukah.

Cities throughout Israel offer many cultural extravaganzas during the holiday. There are musicals and plays for children, often starring some of the best known old and new Israeli television and music personalities. Malls feature children’s programming like arts and crafts stations, or they set up stages with visits from jugglers, singers and often characters from beloved Israeli children’s shows such as “Yuval Mibubal” (“Yuval the Confused”) or “Kofiko” (a monkey with very human traits).

One of our favorite happenings in recent years featured candle dipping. Others included demonstrations of making olive oil and pita (and eating).

There are also plenty of Chanukah parties to attend in the evenings, either public or private. Like in America, synagogues, schools and other institutions host parties, and kindergartens put on pre-Chanukah extravaganzas with song-and-dance presentations for parents. Families get together to light candles and fry latkes in celebration of the miracle of the oil.

Our extended family gets together every year for Chanukah, though coordinating the event becomes more difficult each year as more of the nieces and nephews marry, move away from the community and have children of their own. One of the highlights of our party is the family sing-along, which begins with songs for Chanukah, moves on to well-loved national Israeli songs and finally moves into a different realm — Simon and Garfunkel and show tunes.

There are plenty of public lightings of the chanukiyah — in the Knesset, on army bases, at the Western Wall. The president and the prime minister travel to significant spots throughout the country, and sometimes the world, to kindle the Chanukah lights.

Also as in the United States, and throughout the world, Chabad is a palpable presence in Israel during Chanukah, with their chanukiyot sprouting in town squares, public parks and on the backs of cars. In our own community, the local Chabad lights a tall chanukiyah in the middle of our open-air mall, inviting children to come each night to sing the blessings and enjoy sufganiyot.

Perhaps the best part about being in Israel during Chanukah is walking down the streets of many cities and seeing Chanukah lights burning, often in special glass containers, outside next to the front door. With the mezuzah on one side and the Chanukah lights on the other, the home is surrounded by mitzvot, according to tradition. And since everyone lights their own chanukiyot, it is not uncommon to see a home with dozens of lights burning in the window.

It truly makes Chanukah feel like a national celebration.