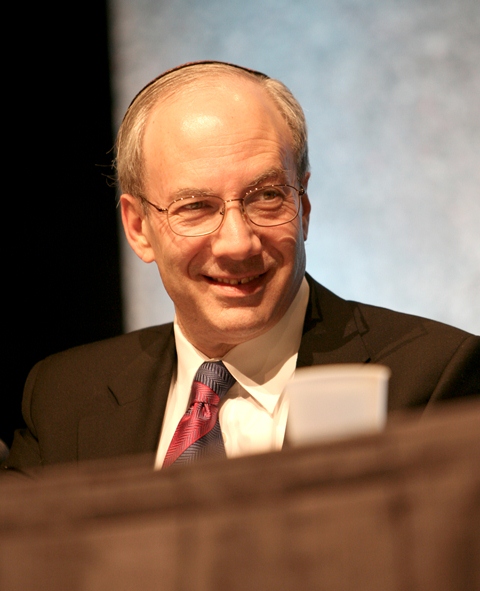 NEW YORK (JTA) — At the end of this year, Rabbi Eric Yoffie, the president of Union for Reform Judaism, will be stepping down after 16 years at the movement’s helm. Last week, Yoffie sat down with JTA Managing Editor Uriel Heilman at the URJ’s offices in New York ahead of the Reform biennial, which will be held Dec. 14-18 outside Washington.

JTA: What are you proudest about your time leading the movement?

Yoffie: My first biennial I talked about Torah at the center. That was less of a programmatic initiative than it was a theological and cultural assertion. We had to operate with a consciousness of Torah being fundamental to all we do. It was an important cultural change.

Second, there has been an extraordinary worship revolution in the Reform movement of joyful, enthusiastic Jewish worship built around participatory Jewish music. It has dramatically changed the worship experience in the movement, and you really see it everywhere. I certainly didn’t create this, but we saw the sparks of this and then tried to support it, accelerate it. That’s Reform Judaism at its best.

And camps. In the last 15 years we’ve added five camps and more than doubled our camping population.

I have lots of regrets. I’m not one of those people who say I have no regrets.

Are all Reform Jews studying Torah? Celebrating Shabbat? Performing mitzvot? Until such a time that that’s happening, we need to ask why not and what more could we have done.

Jews are a dissatisfied people; we cry out all the time. Jewish leaders have to be more dissatisfied than anyone else.

Among the elite, we have more observance and commitment than I would have imagined possible, but general levels aren’t what they ought to be.

Two years ago we started a youth engagement campaign for ages 13 to 18. In retrospect, we should have started that 15 years ago.

While individually I’ve been tremendously engaged and involved in Israel, the reality is that too many people don’t feel the connection they should. I’m sorry I wasn’t more successful in creating those bridges.

The upcoming Reform biennial is slated to be the largest ever, with nearly 6,000 attendees. What’s so special this year?

It’s a time of transition. There’s tremendous enthusiasm about Rick [Rabbi Richard Jacobs, the incoming president of the URJ]. People want to come. Most of these people aren’t rabbis but synagogue lay leaders who come at their own expense. That’s enormously encouraging.

What’s the role of the president of the URJ?

It’s a mistake to exaggerate the influence of the president of the URJ, and for that matter most Jewish leaders. The most important Jewish work is done in local Jewish congregations.

We can help shape Jewish consciousness, give priority to important Jewish things, give concrete support, offer legitimacy in cases where there may be some resistance among leaders.

If organizations like yours only have a limited influence on Jewish life, who has a great influence?

The critical arena for the Jewish world is the synagogue. It’s the anchor. It’s the only place in the Jewish world where you’re valued as an individual Jew no matter who you are or how much money you have. It’s a democratic venue. It’s a place where you study Torah and you pray and you educate your children, where you create community, deal with people who are suffering, celebrate successes. Where else does that happen?

Does contemporary Reform have an ideology?

Heschel [Abraham Joshua Heschel, a major Conservative Jewish thinker who taught at Reform’s Hebrew Union College for five years but spent most of his career at the Conservative movement’s Jewish Theological Seminary], talked about a three-legged stool of God, Torah and Israel. I would say Torah study, observance of mitzvot and faith in the God of Israel.

We understand you need a balanced Judaism; focusing on any one leg distorts the others.

Reform Judaism has become more expansive. What is certainly different is the word “mitzvah” [commandment]. That word had really disappeared from the Reform lexicon, even as late as the 1970s. That began to change. I spoke a language of mitzvah. We now have a Reform Judaism that is in a certain sense more traditional. We’re also more radical. We live with the contradiction.

We’re not a halachic movement and we don’t profess to be. In some ways, we clearly have adopted polices that by pre-modern standards are a departure: patrilineal descent, gay and lesbian partnerships.

If it’s not ethical, it’s not Jewish. As much as we embrace tradition, we remain committed to this notion.

Reform Judaism long has struggled to gain a foothold in Israel. Will it ever catch on there?

If we’re not a part of Israel, we move to the margins of Jewish history. The key is Israeli Reform rabbis. When we have 100 Israeli-born and -educated rabbis, it’s going be a different country and a different movement. Now we have 40-plus rabbis. In 10 years we’ll have 100.

What’s next for Eric Yoffie?

I write for The Huffington Post, I blog for the Jerusalem Post, I have some other writing projects. I’m exploring. There’s a lot to do in the Jewish world, even outside of the Jewish world. I’ve thought of writing about Israel, I’ve thought about writing about Chabad. I’ve always thought about writing children’s books. I enjoy the blogging style. It fits my mentality.

What would you write about Chabad?

Their role in the community is fascinating. I see the intense reactions they elicit, both positive and negative, from people outside of the Chabad world both in Reform and non-Reform circles. There are those who feel it’s undermining other institutions in the community and at the same time people who have been touched by a Chabad rabbi or have found a Chabad connection.