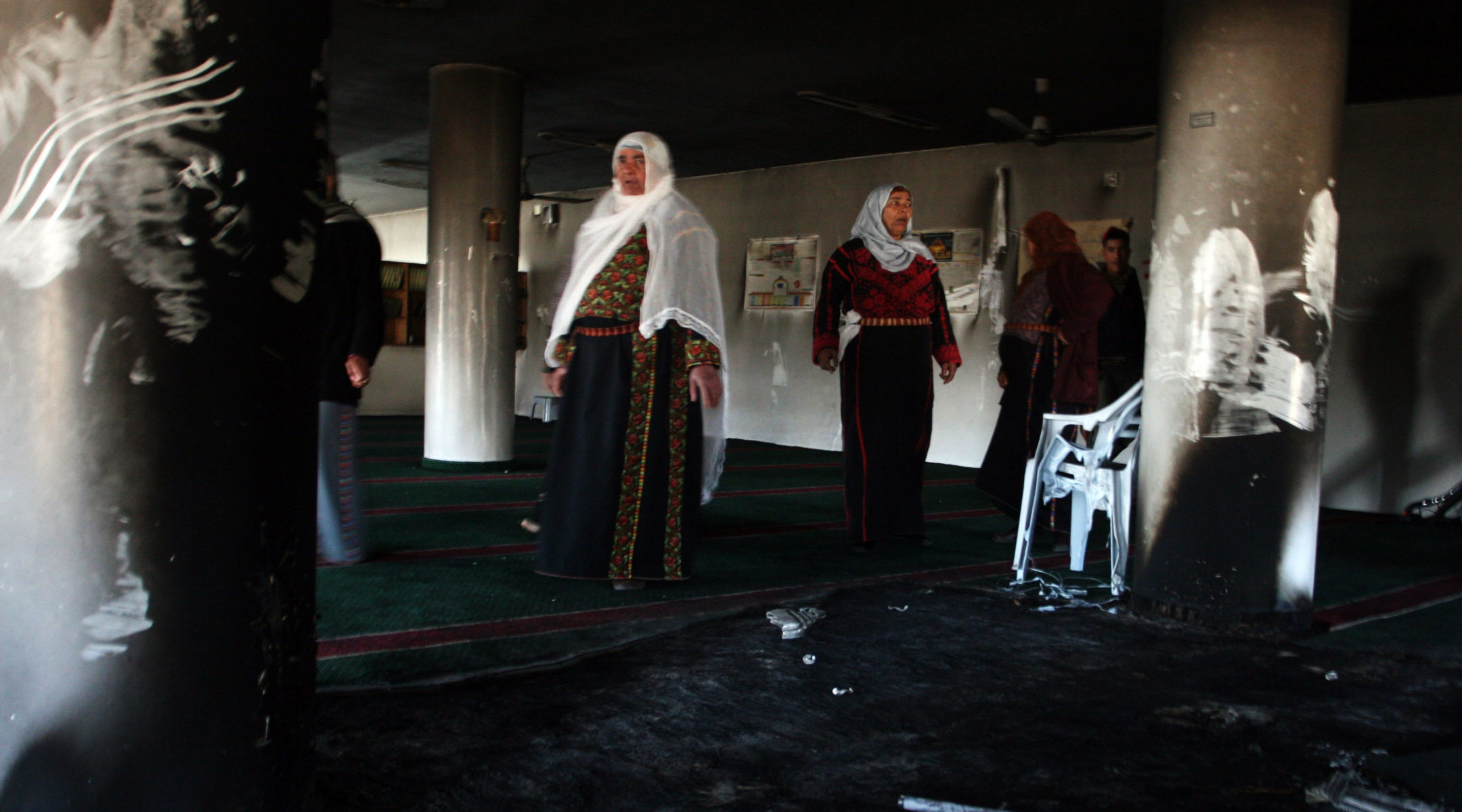 Palestinians from the West Bank village of Burqa view the damage to their mosque from an arson allegedly committed by Israeli extremist settlers in a price tag attack, Dec. 15, 2011. (Issam Rimawi/Flash90)
Advertisement

YITZHAR, West Bank (JTA) — Charred tires and boulders pushed to the sides of the road leading to Yitzhar, a West Bank Jewish community near Nablus, were among the signs that residents had made an effort to prevent Israeli soldiers and police from entering the settlement. Patches of grease stains — remnants of the lubricants that had been poured on the narrow road to induce army jeeps, police sedans and backhoes to lose traction — were others.

It seems that if not for the influence of the late Lubavitcher rebbe, there might have been more resistance, not just the blockades and grease on the road last Thursday night, according to an account of the events related by Avraham Binyamin, the settlement’s spokesman to JTA during a visit Sunday.

“It is not our way to stand by passively while such a brutal act is perpetrated,” said Binyamin, a tall, bespectacled young man with a full beard, sidelocks and a large knitted yarmulke, pointing to the ruins of a home and a chicken coop destroyed under government orders for being built on land said to belong to Palestinians.

“But we honored the wishes of the man who owns the land here and did not attempt to resist the destruction,” he added, “at least not in the vicinity of his property.”

The man who Binyamin said owns the land is affiliated with a stream of Chabad Chasidism that believes the deceased Lubavitcher rebbe, Menachem Mendel Schneerson, will return as messiah. In this milieu, it is customary to “ask” the rebbe for his advice by randomly placing a question written on a piece of paper inside a compendium of Schneerson’s letters. In this case, according to Binyamin, the “answer” given by the rebbe via one of his old letters was, “Don’t fight, concentrate on building.”

The willingness of Yitzhar residents to respect a dead rabbi’s command — one they believe came from the grave — but ignore an order by the government of Israel is instructive. So was Binyamin’s caveat that there would be no violence “in the vicinity.”

Just hours after the destruction of the house, located on a hilltop adjacent to Yitzhar known as Mitzpeh Yitzhar, arsonists torched a mosque in Burqa, a village about four miles east of Ramallah — a half-hour drive from Yitzhar. The desecrators spray-painted the words “war” and “Mitzpeh Yitzhar” on the wall of the mosque.

It was just one in a chain of violent vigilante attacks. In the past few years, radical right-wing activists, representing a growing fringe, have pursued a campaign they call “price tag” to avenge perceived injustices meted out against them by the Israeli government, such as the demolition on Mitzpeh Yitzhar.

Mosques have been burned and desecrated with graffiti such as “Muhammad is a pig,” Palestinian olive trees have been slashed and burned, and other Palestinian property has been damaged. Vandals also have targeted property belonging to Israeli security forces.

But a red line was crossed in recent days.

Shortly after midnight on Dec. 13, settler radicals — often referred to as “hilltop youths” because they tend to be young and live on small, isolated outposts — stormed into an Israeli base in the northern West Bank. They burned tires and vandalized army vehicles, throwing stones and paint at them.

Elsewhere in the northern West Bank, settlers also attacked and lightly wounded an Israeli army commander when they forced open the door of his jeep and hurled a brick at him.

These attacks on the Israel Defense Forces — one of Israel’s most revered institutions and one to which Israeli families must entrust their sons and daughters — appalled Israelis and sparked intense debate over how best to combat lawlessness in the West Bank.

Political leaders on the left and center argued that the current government’s ideological affinity with the settler movement impaired its ability to crack down on the violence.

Tzipi Livni, Knesset opposition leader and head of the Kadima Party, said in a statement that “this government … is laying fertile ground for these tumors. When Netanyahu says that we are dealing with rioters and not ideological crime, it indicates one of two things — either he doesn’t understand what is happening here, or he doesn’t want to deal with this extremist ideology because of his natural coalition partners.”

Prime Minister Benjamin Netanyahu and other government coalition members have come out strongly and repeatedly against the vigilante violence. Netanyahu said it must be combated with “a heavy hand.”

This week, the whips of all the political parties in the governing coalition except Barak’s Independence faction supported a bill to prevent the demolition of Jewish homes thought to be built on private Palestinian property, like the one destroyed in Mitzpeh Yitzhar.

This would be on condition that the house was standing for at least four years and that at least 20 families live on the outpost. The bill proposes providing compensation to the Palestinian landowner instead. At the last minute, Netanyahu torpedoed the initiative. But an appeal was filed, and the legislation might still move ahead.

Settlers were quick to distance themselves from the violence.

Danny Dayan, chairman of the Yesha Council, an umbrella organization of municipal councils on the West Bank that represents mainstream settlement leadership, condemned radical settler attacks against Palestinians and called the assault on the Israeli army base “a shameful, ungrateful atrocity.” He called on the police and state attorney to arrest those responsible and bring them to justice.

But Dayan also warned against lumping together the entire settlement movement with a “fringe” group of radicals. He argued that though “99 percent” of settlers were opposed to acts of violence, some on the left were attempting to exploit recent incidents to “demonize” and “delegitimize” the settler movement as a whole.

Despite the broad consensus opposing violence against Palestinians, however, law enforcement has been largely ineffective. Few suspects have been arrested and even fewer have been indicted.

Out of 112 cases of alleged settler abuse against Palestinians that B’Tselem, an Israeli human rights organization, asked police to investigate in the past two years, two indictments were issued — one for rock throwing and the other for torching a vehicle.

Sarit Michaeli, a B’Tselem spokeswoman, explained that the total number of alleged cases of settler violence for the period was undoubtedly higher since B’Tselem figures only included incidents in which the organization became involved. They do not include incidents in which other human rights organizations, such as Yesh Din, were involved, nor do they include the many cases in which Palestinians refrain from complaining because they see no chance of getting a just hearing.

According to Michaeli, West Bank police are used to prosecuting Palestinians in military courts where less conclusive evidence is needed to convict. Indictments are often based on extracting confessions.

In contrast, radical settlers, as Israeli citizens, are tried in civilian courts where more rigorous evidence is needed to convict and basic rights are protected, Michaeli added.

Hilltop youths have developed sophisticated legal tools, forming a legal aid group that offers subsidized defense. A booklet called “Know Your Rights,” which has been circulating in the West Bank for years, instructs settlers on how to avoid pitfalls during interrogations. The most common tactic is to simply refuse to answer questions.

In an attempt to crack down on the Jewish vigilantes, Netanyahu announced last week that some radicals would be treated the same way as suspected Palestinian militants — detained for long periods without charge and tried in military courts. He stopped short of declaring the hilltop youths a terrorist organization, as suggested by Defense Minister Ehud Barak.

But human rights groups such as B’Tselem, which long have condemned Israel’s use of administrative detention and military courts against Palestinians, voiced opposition to extending these methods to be used against settlers as well.

Meanwhile, at Mitzpeh Yitzhar, residents are preparing to rebuild the house demolished by Israeli security forces. The land has already been leveled by a tractor, apparently to prepare for an even larger structure, and some of the debris has been cleared.

Yehuda Liebman, a Yitzhar settler, told Army Radio last week that the destruction should be seen as a positive thing. Hundreds of thousands of dollars in donations from abroad have come pouring in, according to Liebman.

“The next house will be even bigger than the last one,” he said.