Mayim Bialik and the Maccabeats bring some holiday cheer 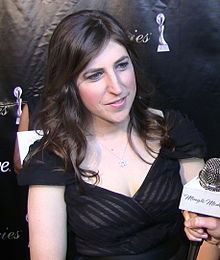 Although I will forever view her as my favorite 90s sitcom star, Mayim Bialik has become the Jewish force to reckon with. Not only is she a neuroscientist, a journalist, and a star of a hit television show, but she is also a very nice lady. Bialik recently teamed up with Jewish singing sensation The Maccabeats to raise money for the Gift of Life Bone Marrow Foundation. The Maccabeats are hoping to raise $80,000 by the end of Chanukah for the organization with Bialik’s help and support. For every $18+ donation, the donor will receive a gift. The gifts start small, with things like free mp3s, and build up to bigger things like an autographed photo of Mayim Bialik. All donors are entered in a lottery to win one of six grand prizes, which includes a guest spot in the new Maccabeats video, Big Bang memorabilia, a phone call from Mayim, or having lunch with the Maccabeats.

I love this. Even if the prizes seem moderately ridiculous, it just seems right for Mayim Bialik to be friends with the Maccabeats, and team up with them for a really great cause. Not only is she on this philanthropic mission, but she even has a cameo in their new video (a version of Mattisyahu’s “Miracles”)!

On her blog, Bialik gushed at the chance to hang with the ‘beat boys: “Being a part of a video by a group that I respect and adore is sort of insanely surreal; I feel like the girl in the ‘Dancing in the Dark’ Bruce Springsteen video who’s pulled up on stage to dance with him during the concert,” Bialik excitedly writes. “Except The Maccabeats can’t touch me to pull me up on stage, can’t watch a woman dance, and would never wear a red bandana around their kippah-adorned heads.”

Ah well. Guess you can’t have your kosher cake and eat it too.