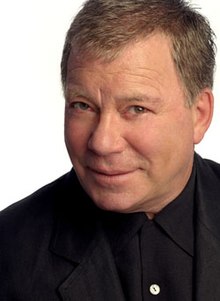 How can you even think of killing off this punim??

You know what seems to be a recurring theme with William Shatner? Dying. That’s right: Not only does Shatner die in singular fashion in the made-for-TV film “Dead Man’s Island” (What? I like to start out strong), and in his role as Captain Kirk in “Star Trek: Generations,” but now Priceline is giving the old man the boot as well.

For the last fourteen years, Shatner played the role of “Priceline Negotiator” with timeless class. And now the discount travel site is killing him off in what can only be described as a used-car salesman ending.

Although Shatner is reportedly still under contract with Priceline, rumor has it that the Negotiator will meet his end by rescuing a family whose bus is teetering on the edge of a bridge. Although he magically saves the fam and finds them a fantastic discount rate at a hotel in the process, the Negotiator is unable to extricate himself from the mess and dies with the words: “Save yourselves … some money,” sputtering out of his stretchy old man lips.

“We felt it was necessary to go to extremes to grab the attention of every consumer in America and drive home the message that you don’t have to negotiate to save money on a hotel at Priceline.com,” said Priceline Chief Marketing Officer Brett Keller. “We hope that everyone understands this was something that just had to be done.”

What? Since when is killing off a Hollywood legend something that just “had to be done”?  Zit faced sci-fi fans everywhere will be reliving Captain Kirk’s traumatic death, booking themselves into discount hotels so that they can cry themselves to sleep in peace. RIP, Negotiator. Maybe Expedia is in the reincarnation business?