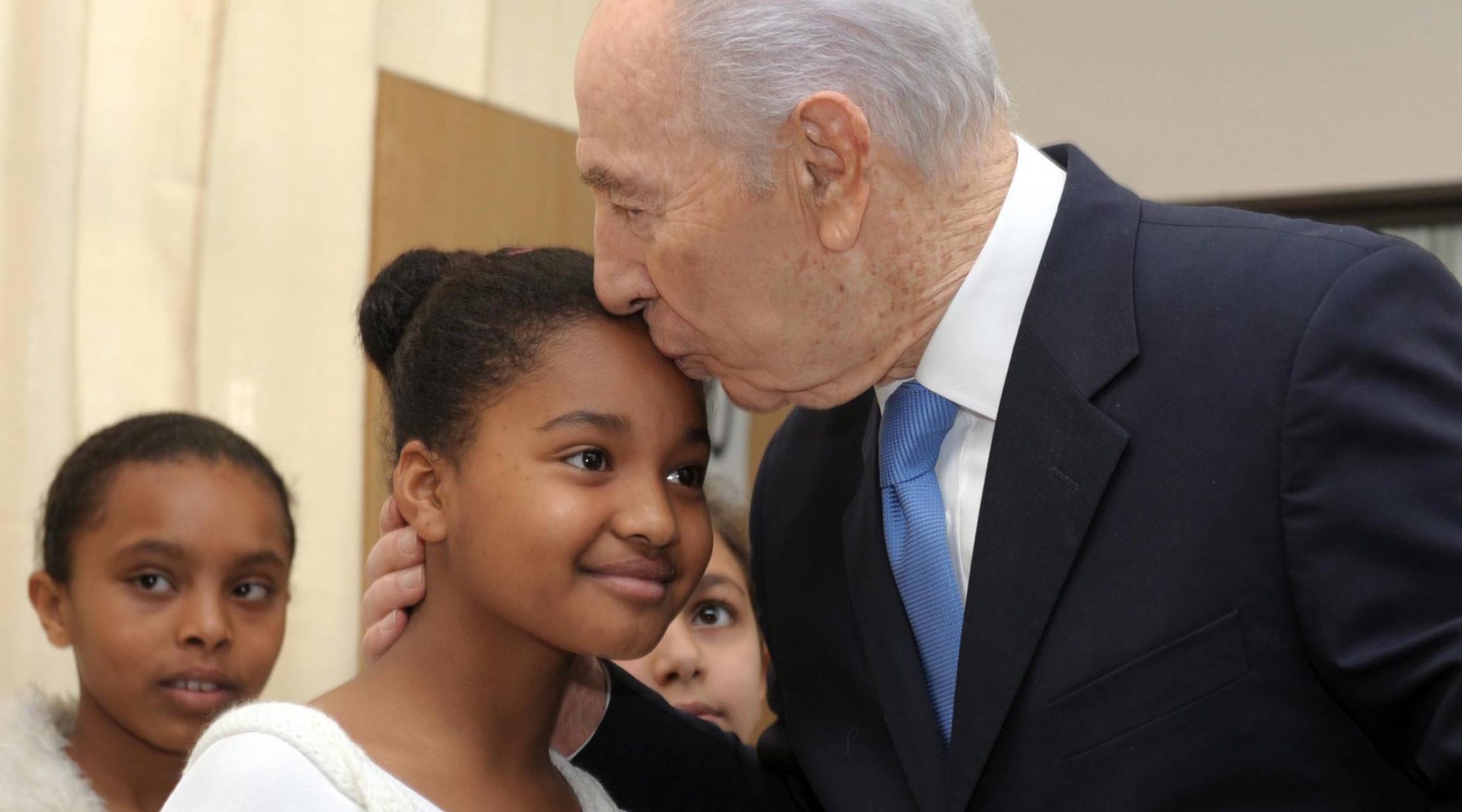 President Shimon Peres has a kiss for an Ethiopian student at the Amit Reishit School in Jerusalem, where he was inspired to write a song in tribute to the Ethiopian Israeli community after listening to the school's choir, Jan. 12, 2012. (Mark Neyman/GPO/Flash 90)
Advertisement

A Moshe by any other name

The Knesset is going on the offensive against offensive baby names.

A parliamentary committee has advanced a bill that would bar parents from sticking their children with insulting or damaging names. Under the measure, the interior minister could refuse to register a baby’s name and would appoint a Public Names Committee of experts, including an educator, a psychologist and a social worker, that the minister and the parents could consult on the name choice. The panel could reject a name it deemed might hurt the child.

Under the current law, the interior minister can refuse to register a name that “could mislead or offend the public.”

Sponsored by Zevulun Orlev of the Habayit Hayehudi Party and Miri Regev of the Likud Party, the bill now moves to committee before it reaches the full Knesset.

Soldiers who lay down their arms can pick up knives — sushi knives, that is — and be paid by the Israeli government.

Recently discharged soldiers can learn to be sushi chefs on the government’s dime, with the courses costing about $1.2 million. A quarter of the funding will come from the Defense Ministry budget, Haaretz reported.

They are eligible as well to receive grants given to ex-soldiers who work in jobs classified as “priority work.”

The decision to train former soldiers as sushi chefs reportedly is part of an effort to reduce the number of foreign workers employed as cooks in Asian restaurants.

Six courses will be given this year throughout the country, with a minimum of 25 students in each course. Soldiers who graduate from the course will be placed in jobs and also may receive a large grant if they work in the job for which they trained during the first year.

Tel Aviv is the world’s third-largest sushi market in per capita terms, behind Tokyo and New York.

Pick a side, any side: Israelis will have their say.

Brothers Omer, 26, and Sella Nevo, 22, earlier this month won the World University Debating Championships for English as a second language — the third consecutive year that an Israeli team has won first prize at the championships.

The brothers are students at Tel Aviv University; both are studying mathematics and computer science. They outlasted teams from Malaysia, Berlin and the Netherlands in the final round. The final debate centered on the ethics of scientists studying climate change

“We love to talk, discuss, argue and debate,” Yoni Cohen-Idov, the team’s coach and former ESL world champion, told Haaretz. “Israelis do it all the time regardless of competitions.”

I want to ride my bicycle

Tel Aviv city residents and visitors are trading in their cars for bicycles under the city’s expanding rental service.

At least 13,000 people have purchased an annual subscription to Tel Aviv’s bicycle rental service, Haaretz reports. Some 5,500 bicycles are rented each day, half in the city center. Yearly subscriptions are about $64 for city residents and $74 for non-residents.

Now the service will be offered to tourists and other short-term visitors to the city with daily and weekly subscriptions.

The project could soon be expanded to Ramat Gan and Herzliya.

Israelis spent nearly four hours a day watching television, more than any country except the United States and Britain, in 2011 — and more than in any year since figures have been tallied.

The annual report of the Israel Audience Research Board also found that Israelis watched seven more minutes of television in 2011 than the previous year and that reality shows were the most viewed progamming.

The Israeli version of “Big Brother” led the way among Israeli viewers, followed by “Music School,” “Master Chef” and “Ramzor,” a comedy series.

An Israeli entrepreneur has changed his name to Mark Zuckerberg in response to a lawsuit against him by Facebook, the social networking site founded by the real Mark Zuckerberg and now its CEO.

Rotem Guez founded a “like” store, where companies can buy “likes” in bulk for their Facebook pages.

Facebook sent a lawyer letter to Guez ordering him to close his business. But Guez insists that it is legal and changed his name to Mark Zuckerberg to see if the company is ready to sue its founder’s “namesake.”

The popular musician Idan Raichel set the president’s lyrics to music following a personal request from the nation’s most popular politician.

An eighth-grader named Rachel, who leads the choir of the Amit Reishit School in Jerusalem, inspired the song, which Peres wrote hours after watching a performance by Rachel and the choir.

What’s good for the goose

A goose from Europe was sighted in Israel for only the second time in a decade.

A bird watcher in northern Israel espied the Bean Goose, which nests in northern Europe and Siberia, and during the winter migrates to damp areas of Europe. The last sighting in Israel was 2007 in Eilat.

The sighting comes a week after a flock of nine singing swans was spotted in the Hula Valley — their first sighting in Israel in more than a decade.

The release of kidnapped Israeli soldier Gilad Shalit was the most searched news item by Israelis in 2011.

Shalit beat out “Big Brother,” Syria, Iran and Libya for most searched news item, as well as iPhone 5, the Hapoel Tel Aviv sports club, the medical residents’ strike, trains and Bank Hapoalim, which all made the top 10.