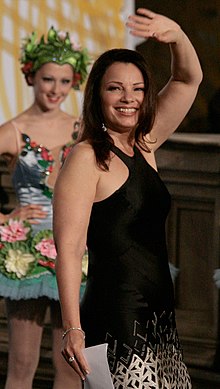 I was wrong! Here she is mid-abduction!

To all of you men who would slobber over Fran Drescher’s spandex-covered derriere during her heyday, I’m sorry to be the bearer of bad news: The raven-haired Jewess is a total loony. I know I have a tendency to label many mid-nineties female sitcom stars as “crazy people,” but it is ALWAYS for good reason. And this reason is the best.

Ok, so Drescher believes in aliens. I do too, in the “protozoan life forms on other planets” kinda way. She is more of the “I was abducted by aliens and they bit me and now control my mind” variety.

Drescher recounted the following story to the Huffington Post:

“You know, it’s funny because Peter (Fran’s ex-husband) and I both saw [aliens] before we knew each other, doing the same thing, driving on the road with our dads…we were both in junior high. A few years later, we met, and we realized that we had the same experience. I think that somehow we were programmed to meet. We both have this scar. It’s the exact same scar on the exact same spot.”

What makes this story less believable is that Peter Marc Jacobson, Drescher’s ex, says she is full of doody. He claims that her scar is from burning herself with hot water, not an alien invasion. And how does the Nanny star respond to that? “That’s what the aliens programmed us to think,” CrazyLady explains. “But really, that’s where the chip is.”

Now I’m sure you all think I’m judging Miss Drescher too fast. With all the credentials and citations going on here, how can I doubt her? Easy. That laugh and accent would scare off any creature brave enough to approach Her Strangeness. Aha! Caught you in the act, Fran Fran!