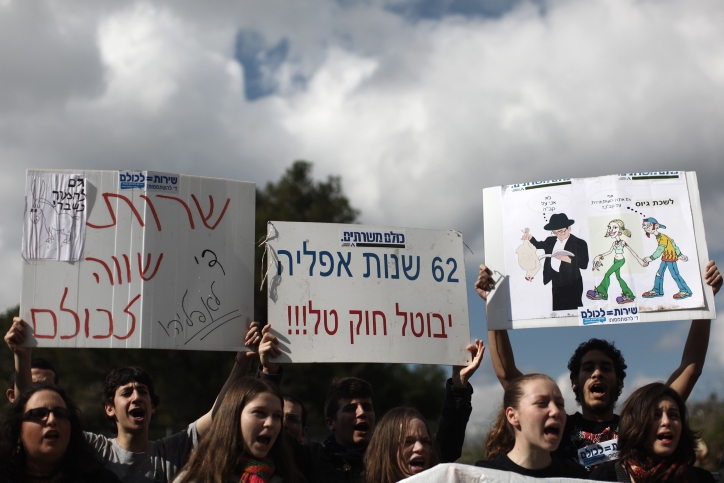 Young Israelis demonstrating outside the Prime Minister's Office in Jerusalem in protest of the government's plan to possibly extend the Tal Law, which exempts yeshiva students from army service, Jan 29, 2012. (Kobi Gideon/Flash90)
Advertisement

JERUSALEM (JTA) — When Israel’s first prime minister, David Ben-Gurion, granted a few hundred haredi Orthodox Jews an exemption from army service, it’s likely he never dreamed that 63 years later, tens of thousands of haredi Israelis would claim the exemption — or that the issue would be among the most contentious in modern Israel.

Haredi army service took center stage again this week when Israeli Prime Minister Benjamin Netanyahu said that he would not seek a five-year extension of the Tal Law but would allow the Israeli Knesset to vote on the issue.

The law, named after retired Supreme Court justice Tzvi Tal and enacted in 2002 under then-Prime Minister Ehud Barak, allows full-time yeshiva students to delay their army service until age 23. At that time, students either can continue studying full time, do a shortened 16 months of army service (instead of three years) or a year of national service. Afterward, they may choose to join the workforce.

“The Tal Law has failed,” said Yehuda Ben Meir of Tel Aviv University’s Institute for National Security Studies. “It has not been able to wean the community off the idea of not serving and not working. There is now a third generation that believes this is the way they should live.”

Until the Tal Law, haredim were theoretically draftable unless they were full-time Torah students. Opposition to joining the army meant that tens of thousands of young men were staying full time in yeshiva just to avoid army service. Theoretically the men were subject to the draft if they left the yeshiva before age 40, but practically they could leave the yeshiva after turning 30.

The Tal Law was intended to get the students out of the yeshivas, into the army briefly and then into the workforce, solving a problematic cycle.

It hasn’t turned out as its proponents had hoped.

Only a small number of haredi Israelis have joined the army, though the numbers are increasing slightly. According to Israel Defense Forces figures, 1,282 haredi men enlisted in the army in 2011, up from 898 in 2010 and 729 in 2011. Most of them served in special male haredi units, where the kashrut standards are higher and there is no mixing with women.

But the vast majority of haredi men have stayed in the yeshiva, and their rabbis continue to discourage serving in the army. The opposition is largely ideological. Haredi leaders worry that the army will open up a path to lax Jewish observance. Some haredi sects are anti-Zionist, and those that support the state believe that Torah study is a legitimate alternative way of contributing to Israel’s security by sustaining the state spiritually.

“Jews are fighting this war on many fronts, and learning Torah is also fighting a war,” said Rabbi Shimon Hurwitz of the Aish Hatorah yeshiva. “A hundred years ago Teddy Roosevelt said, ‘To educate a person in his mind and not his morals is to educate a menace to society.’ Torah study teaches morality.”

Hurwitz said some staff and students at his yeshiva do serve in the army. His main objection to his students joining the army is the difficulty in maintaining strict levels of Jewish observance, he said.

“We tell the students that there’s a lot of peer pressure not to be religious and it’s very difficult to stand against that,” the rabbi said. “We don’t want them to lose something valuable in terms of their personal and spiritual growth.”

Resentment against haredi army exemptions from Israelis who do serve in the army — both secular and Modern Orthodox — is growing.

“Social justice begins with equally sharing the national burden and army service,” opposition leader Tzipi Livni told reporters this week. “This is a battle for everyone who believes in Zionism and who wants to live in this country.”

The Tal Law was passed initially for five years and extended in 2007. Now it’s up for another renewal, and many Israelis say the law has failed and should be canceled. The Israeli Cabinet was supposed to vote on the law this week, but Netanyahu said he will leave it for the Knesset to decide, insulating himself from expected haredi protests if the law is not extended.

The fight against extending the law is being spearheaded by the same group of Israelis who were behind last summer’s protests against the cost of living in Israel.

They are working middle-class Israelis who serve in the army and find it difficult to make ends meet. They believe they are shouldering an unfair amount of the national burden both in paying taxes and in army service. They say they feel like “friars,” or suckers, something to which Israelis have an inborn aversion.

This week, a group of these Israelis formed a “sucker’s encampment” to campaign against renewing the Tal Law.

“We want the government to legislate a law that requires mandatory service, army or civilian, from everyone — Jews, Arabs, religious and secular,” activist Boaz Nol told reporters.

The Tal Law seems likely to be extended for at least a year, although Barak, now defense minister, insists he will not back it for more than another year. At the same time, the haredi political parties have enormous power in the current coalition. The Sephardic Orthodox Shas Party has threatened to pull out of the government if the law is not extended.

It seems unlikely that the haredi community will join the army in large numbers anytime soon.

Even if haredim did decide to join the army en masse, it’s not clear that the army is prepared to utilize them. On one hand, there is a growing manpower shortage. At the same time, the army has to make special accommodations for them, such as organizing all-male units and providing glatt kosher food.

“It really is more of a symbolic issue,” Lerer said. “As the army has become more dependent on women serving, often in more combat roles, I don’t see how they can absorb the haredim. It would mean a complete change in the identity of the army.”

Some analysts say that if the government decides that it is important enough for the state, haredim evenutally could be integrated into the army.

“You would have a tremendous social crisis, and many of the rabbis would tell their students to go to prison rather than serve in the army,” said Ben Meir. “But they don’t really want to go to prison.

“It can be done, perhaps. But not with this government and this coalition.”