Whether a bed, or help figuring out what to do in one, some kosher options for Valentine’s Day 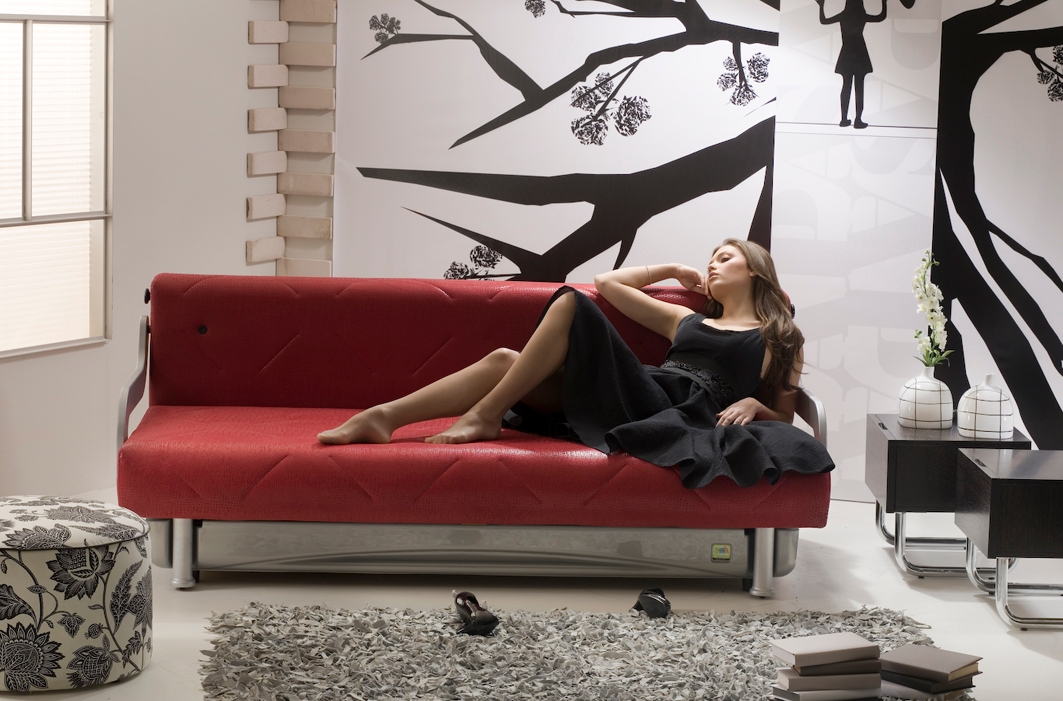 Something red for Valentine's? The Check-In, made in Israel by Sapapa, converts from sofa to bed in one touch. (Courtesy Sapapa)
Advertisement

LOS ANGELES (JTA) — On Valentine’s Day, for a people tasked in the Bible with being fruitful and multiplying, what goods are good for the Jews?

Perhaps sex toys from an Orthodox-oriented website that are not supposed to make you blush? Or maybe your pleasure for these long winter nights is a new bed made in Israel that is as flexible and modern as you are?

Since the name of the Israeli manufacturer who makes the beds is Aminach, which in Hebrew means “my people rest,” we’ll take it easy and test their Sapapa line of contemporary beds first.

Its flagship store for the line, located in the Los Angeles neighborhood of Studio City, carries a variety of “extreme” day, trundle, adjustable and folding beds — designs that they promote as being “beyond the conventional.” As I walked up to the store, a sleek, cherry red convertible sofa in the storefront window caught me by surprise.

In the Bible, Jacob sleeps on the ground with a rock for a pillow. With that kind of design heritage, I expected these Israeli designs to be functional and utilitarian — but they were stylishly hot, too.

“It’s called Check-In,” said Hila, the store’s saleswoman, who demonstrated how with one hand the design went from couch to bed.

“Let’s try the mattress,” I suggested to my wife, Brenda, who had come along for just such a contingency.

We were both surprised at the firmness and comfort of the queen size mattress. “In Israel, everyone prefers hard mattresses,” said Hila, who had grown up on a kibbutz, adding that “Aminach is Israel’s third-largest employer.”

Sapapa is a pun — a play on the Hebrew word for couch, sapa, and an Arabic word, sababa, which roughly translates to “cool.” According to the brochure, the beds are cool, hot, exciting and extreme. All of that goes for $2,000, not including set-up and delivery, for the Check-In model.

Looking around the showroom, the Freedom design immediately raised my sleep number. Wrapped in red, and equipped with a hand-controlled mechanism that raised and lowered both the feet and the head, we couldn’t resist trying it out. On the $3,450 bed I played with the controller, eventually settling on raising both ends. If a good night’s sleep is the best aphrodisiac, then this design might be rated triple ZZZ. Given another moment, Brenda and I both would have fallen asleep.

Since some of the beds come equipped with blue lights and speakers in the headboard, I wondered about other add-ons. “Do they also come with vibrators?” I asked, for which Hila shot me a look of disdain. I had meant to say “massagers,” but perhaps the other nomenclature would be more appropriate for Kosher Sex Toys, the next stop on our journey to Feb. 14.

Before we examine this “kosher” collection of very personal gifts, let’s first consider the need for vibrators, stimulators, whips and shackles on a Jewish web site. The mission of Kosher Sex Toys is to “provide married adults with products that can help enhance their intimate moments without involving crude or indecent pictures or text.” The website promises that nothing on the site “will make you blush,” and product pictures do not feature models.

Get the picture? It’s everything you wanted to know about sex but were afraid to look at — but apparently not afraid to use. The business, located in Lakewood, N.J., a city with a large Orthodox population, would seem ideally situated to service this niche market in what Inc. magazine estimates is a $2 billion industry.

Many of the items available for sale — vibrators, lube and bondage gear are among the offerings – are sold as well on other sites.

“It’s our attitude and how it’s sold that makes it different,” said founder and CEO Gavriel (his wife made him promise not to use his last name).

“Handcuffs are on my best-seller list. I am surprised at how well the bondage stuff is doing,” he said. “Whatever makes people happy.”

At first blush, a sex toy web site operated by an Orthodox Jew might seem unusual, but Jews and sexual aids go way back. In the Bible, Rachel, the barren wife of Jacob, asked her sister Leah for some mandrakes, a root found in the Middle East that may have had aphrodisiacal qualities.

I was curious why a sex toy site was needed in the Orthodox community, so I contacted the certified sex therapist who takes questions on the site, Dr. David Ribner, chairman of the sex therapy training program at the School of Social Work at Bar-Ilan University in Israel.

“While Jewish law and tradition have long recognized the centrality of sexual satisfaction to a successful marriage, only recently have we been witness to more public efforts to promote this goal. Kosher Sex Toys is a step in this direction,” Ribner said.

It wasn’t until I visited another site and watched a video of the Panther powered up and operating (but not in use) that I understood the full function of the device. My wife, who also viewed the site and the video, felt the same way.

One of the site’s advantages — unrelated to your denominational orientation or sexual proclivity — is that various products on the site are designated phthalate free. The compounds, which have been banned in toys sold in the United States, are plasticizers still often used in the manufacture of sex toys to soften PVC vinyls.

According to a 2011 news story on the ScienceDaily website, a Columbia University study suggests “that prenatal exposure to these phthalates adversely affects child mental, motor and behavioral development during the preschool years.”

Gavriel says he researches each of his more than 300 items but does not personally test them, adding that “I only want to carry things that are safe.”

Koshersextoys.net.: Items from under $10 and up.