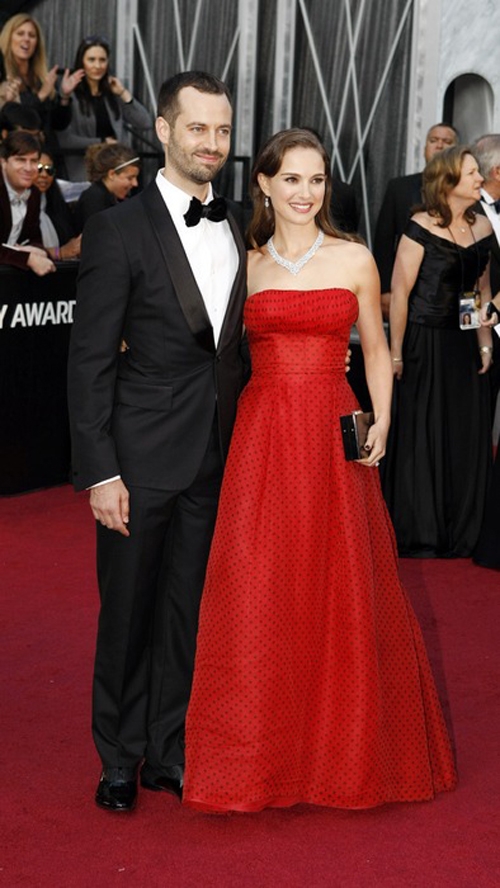 Natalie Portman and Ben Millepied, seen here on the red carpet prior to the 84th Academy Awards, revealed their wedding rings: But are they married? (Courtesy Oscar.go.com)
Advertisement

NEW YORK (6nobacon) — Big week in the world of Jewish celebrities. The 84th Academy Awards show was Sunday in Los Angeles and, as usual, it generated a ton of material for the Semitic-minded celeb watcher.

The main Jewish headline was that the Israeli entry, Joseph Cedar’s “Footnote,” lost to the Iranian film “A Separation” by Asghar Farhadi. But the most shocking piece of news came to light after the show: Natalie Portman got married!

Portman’s appearance with fiancee Benjamin Milliepied on the red carpet Sunday wasn’t supposed to be extraordinary, except for one very small (yet very expensive) detail: the two were wearing wedding rings without telling anyone they got married. Assuming they did marry, which we still don’t know for sure.

According to People magazine, jeweler Jamie Wolf, who is Millepied’s dance pal, confirmed that she designed the pair’s wedding rings. Portman got two diamond rings that fit on either side of her engagement ring. Millipied got a platinum band. “Both baubles are eco-friendly, made with recycled metals and conflict-free diamonds,” Wolf said.

Here are some other Jewish highlights from the show:

Two Jews in ‘Dancing with the Stars’

On Tuesday, ABC announced the contestants for the upcoming 14th season of “Dancing with the Stars.” Among them there are two Jewish celebrities, though you may have to wrack your brain to recall them.

The where-are-they-now spot is being filled by Melissa Gilbert, best known as the child star who played Laura Ingalls Wilder in the 1970s show “Little House on the Prairie.” Gilbert, a former president of the Screen Actors Guild, is the adopted daughter of Paul Gilbert and Barbara Crane and grew up Jewish. She is the sister of Sara Gilbert of “Roseanne” and “The Big Bang Theory.”

The quien-eres-tu (“who are you”) spot belongs to William Levy, aka “the Brad Pitt of Mexico.” Levy, a Cuban-born actor of Jewish ancestry, is a Spanish soap superstar well known to viewers of Telemundo and Univision for his appearances in “Los Teens,” “Pasion” and “Cuidado con el Angel.” He also stars in Jennifer Lopez’s video “I’m Into You.”

Apparently the only thing that blocks Jonah Hill from getting a six pack is, well, a six pack. “I tried to be healthier. I still drink beer — that’s my Achilles’ heel I think. I went to a nutritionist and I said, ‘I’ll lose weight, I’ll eat healthier and whatever, but figure out how I can drink beer,’ ” he told the “Kyle and Jackie O” radio show.

Hill lost about 40 pounds at the beginning of last year. ”It’s so annoying because if I don’t drink beer I get really thin, and then when I drink beer I get a little bigger,” he said. “You should try beer, it’s really good.”

Interesting things happened to Hill since the weight loss. He earned an Academy Award nomination for “Moneyball,” but both his movie “The Sitter” and his FOX animated series “Allen Gregory” were flops.

Conventional wisdom is that Hill is funnier when he’s fatter.

Jason Alexander has beef with Romney

During the GOP debate in Arizona last week, Mitt Romney spiced things up by dropping a “Seinfeld” reference. As Romney basked in applause after making a short statement, the candidate chuckled and let loose with this: “As George Costanza would say, ‘When they’re applauding, stop.’ ”

Romney quickly found himself in a double pickle: the quote, according to Buzzfeed, is not even George’s, but Jerry’s from episode 172, “The Burning”:

JERRY: Showmanship, George. When you hit that high note, you say goodnight and walk off.

Then Jason Alexander, who played Costanza, tweeted about the comment.

Thrilled Gov. Romney enjoys my old character. I enjoyed the character he used 2 b 2. If he’d embrace that again, he’d b a great candidate.

Luke, who is fighting cancer, ascended the stage at the Tarrytown Music Hall in New York to sing “One Day” with Matisyahu. And he rocked it.

It seemed pretty appropriate for the two to perform “One Day,” a song about hope when things don’t go the way people plan. The duet was pulled off with help from Chai Lifeline, a Jewish organization with the mission to “restore the light of childhood to children whose innocence ended when life-threatening or lifelong illness was diagnosed.”