Peres: No space between U.S. and Israel on Iran 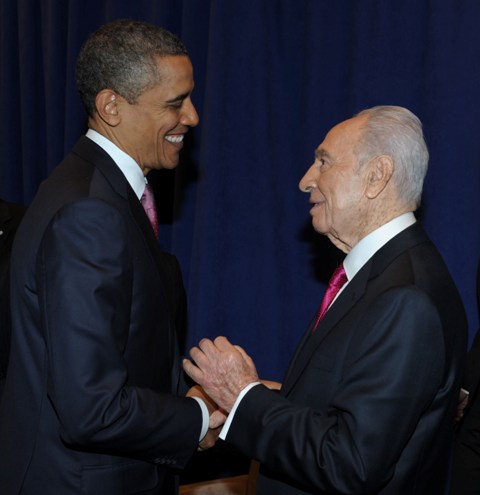 WASHINGTON (JTA) — Israeli President Shimon Peres said there is no space between the United States and Israel when it comes to Iran and said President Obama’s commitment to Israel is “profound.”

“The United States and Israel share the same goal — to prevent Iran from developing a nuclear weapon. There is no space between us,” Peres told the AIPAC crowd.

Peres praised Obama for helping to preserve Israel’s safety and security by securing its highest level of foreign aid and assisting with the development of the Iron Dome missile defense system.

“Mr. President, I know your commitment to Israel is deep and profound. Under your leadership security cooperation between the U.S. and Israel has reached its highest level,” Peres said.

There have been reports in recent months of differences between Obama and Israeli Prime Minister Benjamin Netanyahu over the “red lines” that would prompt military action against Iran to head off its suspected nuclear weapons program.

Republicans have made it an issue in this year’s presidential election campaign and, just before Peres spoke, Liz Cheney, the daughter of the former vice president Dick Cheney, told the AIPAC crowd that no president had done more to “delegitimize” Israel and suggested that Obama was more determined to contain Israel than he was Iran.

Peres, a founding father of the State of Israel, accepted a lifetime achievement award from the pro-Israel group.