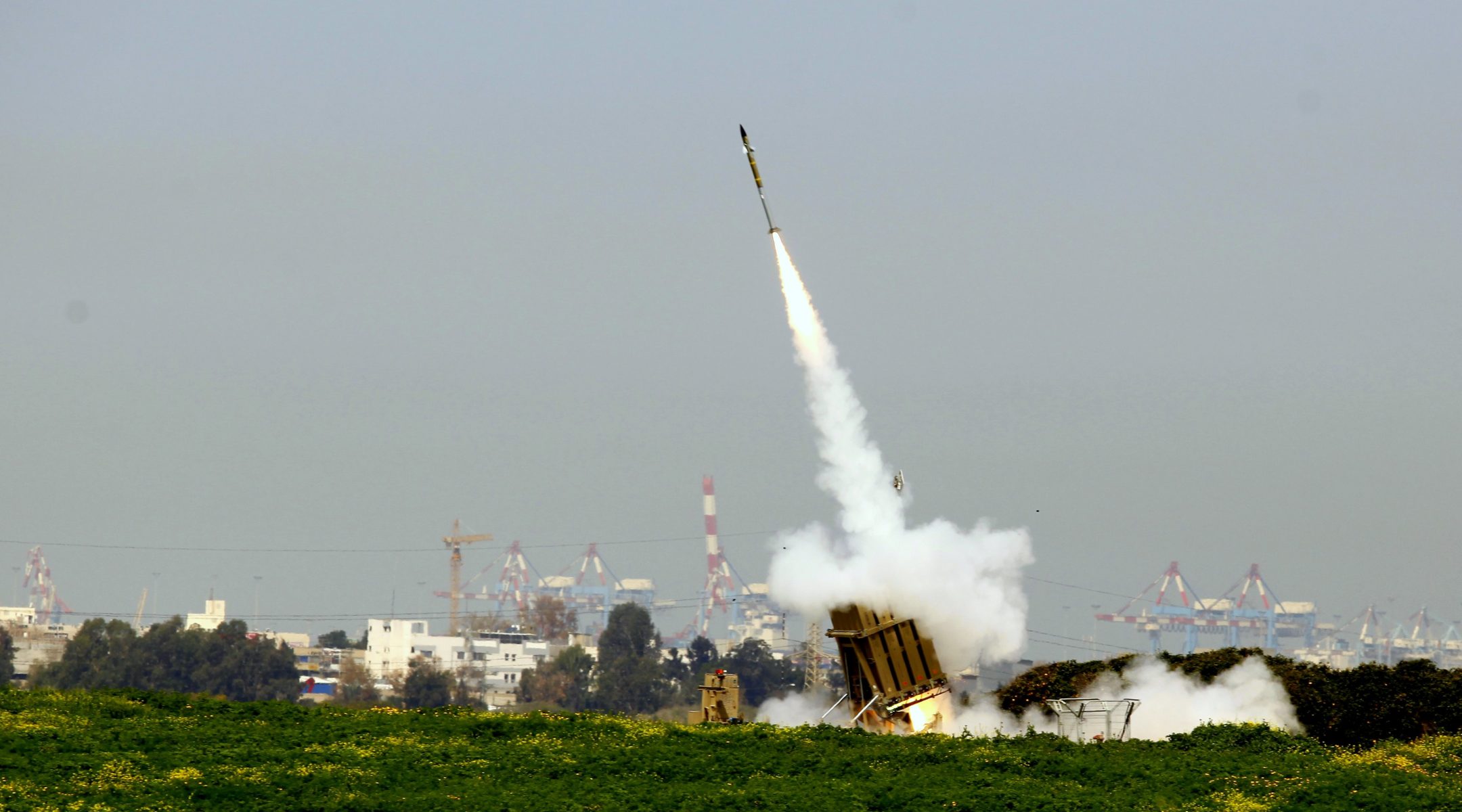 Israel's Iron Dome defense system near the Israeli town of Ashdod has intercepted a volley of rockets fired by terrorist groups from the Gaza Strip area, March 11, 2012. (Flash 90)
Advertisement

JERUSALEM (JTA) – Prime Minister Benjamin Netanyahu said that Israel remains on alert against an attack from Sinai despite killing the terrorist leader that was planning an attack from there — an assassination that has led to a barrage of rockets raining down on southern Israel from Gaza by terrorist groups.

Netanyahu told his Cabinet on Sunday that the Israeli military’s targeted killing two days earlier of Zuhir Mussah Ahmed Kaisi, the secretary general of the Popular Resistance Committee terrorist organization, disrupted the organizing of the attack. Rocket attacks from Gaza by the PRC and Islamic Jihad have continued into Sunday.

The prime minister commended the security and intelligence services in the airstrike that killed Kaisi and another member of the Popular Resistance Committee. The Israel Defense Forces said the two were planning a terror attack that was to take place from Sinai in the coming days.

“We have exacted from them a very high price,” he said. “Naturally we will act as necessary.”

More than 130 rockets have rained down on southern Israel since the killings, injuring eight Israeli civilians, including one severely, according to the IDF. At least 17 Palestinians, including a 14-year-old, have been killed in Israeli attacks on Gaza.

Netanyahu praised the Iron Dome missile defense system, which according to the IDF has intercepted 90 percent of its targets, including 28 out of 31 long-range Grad rockets targeting major Israeli cities such as Beersheba, Ashdod and Ashkelon.

“We will do everything in our power to expand the deployment of this system” in the months and years ahead, he said.

Netanyahu also lauded the residents of the southern Israeli communities for their resilience in the face of the rocket barrage.

“In the end, the strongest force at our disposal is the fortitude of the residents, of the council heads, of Israelis and of the government,” he said. “We are taking the necessary defensive and aggressive measures, and I have no doubt that with this combination, along with the necessary fortitude, we will overcome these terrorist threats around us.”

Netanyahu delivered a similar message Saturday night in a meeting with the mayors of southern Israeli communities. He vowed to continue hitting Palestinian forces in Gaza responsible for the barrage of rocket attacks.

The IDF Home Front Command ordered schools closed again Monday in cities and towns located up to 25 miles from the Gaza border, affecting about 200,000 children, after being closed on Sunday. Classes at colleges and universities in the area also were closed.

On Sunday afternoon, a rocket that landed in a residential neighborhood of Beersheba damaged 15 homes; another rocket that landed near a Beersheba school caused damage to the structure. Pieces of a rocket intercepted by Iron Dome also hit a car and a water pipe in the city, according to Ynet.

Since the violence began, the IDF as of Sunday afternoon had struck 21 targets in Gaza, including 13 airstrikes to halt rocket-launching attempts and eight attacks against weapons factories and storage sites.

The United States said it was “deeply concerned by the renewed violence in southern Israel,” U.S. State Department spokesman Victoria Nuland said in a statement issued Saturday. “We condemn in the strongest terms the rocket fire from Gaza by terrorists into southern Israel in recent days, which has dramatically and dangerously escalated in the past day. We call on those responsible to take immediate action to stop these cowardly acts.

“We regret the loss of life and injuries, and we call on both sides to make every effort to restore calm,” the statement concluded.

Egypt’s ambassador to the Palestinian Authority, Yasser Othman, told the Palestinian Ma’an news agency Sunday that Egypt was working to halt the escalation of violence between Gaza and Israel. He said his country was in contact with both sides in an attempt to stop the violence in order to “to avoid undesirable developments.”

Othman called Israel’s offensive “unjustifiable and a breach to the truce sponsored by Egypt.”

“All options are open before the fighters to respond to this despicable crime,” said Abu Attiya, a PRC spokesman. “The assassination of our chief will not end our resistance.”

Palestinian Authority spokesman Nabil Abu Rudaina said that “Israel’s escalation creates a negative atmosphere and increases the tension, which leads to the increase in violence in the region,” according to CNN.

The IDF issued a statement saying that it holds “Hamas responsible for the recent incidents since the terror organization currently has jurisdiction in the area [Gaza].”

The statement said that  “The Hamas movement, although not the one performing the launchings, is not doing anything to prevent it either.”