As Israel trades fire with Gaza, Iron Dome comes to the rescue 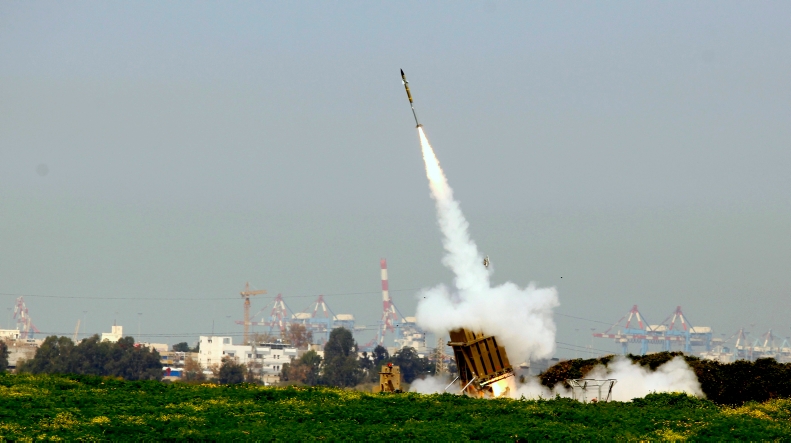 Israel's Iron Dome defense system near the Israeli town of Ashdod has intercepted a volley of rockets fired by terrorist groups from the Gaza Strip area, March 11, 2012. (Flash90)
Advertisement

JERUSALEM (JTA) — If Israel has its way, this is how future conflicts with Gaza-based terrorists will unfold: Israeli aircraft launch surgical strikes on rocket launchers; terrorist leaders are assassinated as necessary; Israeli civilians along the southern frontier are protected by advanced technology that shoots enemy rockets out of the sky; and the world, preoccupied with other matters, is too distracted to object.

The clashes this weekend provide a glimpse of what this brave new world of warcraft might look like. They were precipitated by the Israel Defense Forces’ bombing of a car that carried Zuhair Qaisi, leader of the Popular Resistance Committees in the Gaza Strip, and another top PRC terrorist released in the Gilad Shalit prisoner exchange.

As Israeli leaders expected, Islamist terrorist organizations responded with a barrage of mortar shells, Kassam rockets and Grad missiles aimed at the million or so Israelis living within firing range of Gaza. But Israel’s Iron Dome rocket defense system performed admirably, foiling dozens of deadly hits and providing Israel with cover to go after terrorists it considers valuable targets.

Israel also has been able to act decisively without causing widespread carnage and inviting a broader retaliation. As of Monday night, Israel Air Force strikes had resulted in few civilian deaths among the more than 20 Palestinians killed — most of the casualties were members of terror groups. And with the world largely distracted by the violence in Syria and a looming confrontation with Iran, it seems that Israel’s leaders viewed this as an opportune moment to strike.

“The Americans are busy with presidential elections, Syria is involved in a civil war, which means that its proxy in Lebanon — Hezbollah — has been weakened, and Egypt is dependent on the U.S. and is in no position to do anything,” said Professor Efraim Inbar of the Begin-Sadat (BESA) Center for Strategic Studies at Bar Ilan University. “Most of the world would be relieved that Israel is tied down in Gaza and not planning an attack on Iran.”

On the Palestinian side, a different set of considerations is driving Hamas, the controlling power in Gaza, to refrain from taking an active part in the attacks against Israel and confronting more extremist organizations.

Hamas is keen to show it can ensure quiet in Gaza and avoid provoking Israel, but it also wants to preserve its position with Gaza’s young and radicalized population by avoiding a clash with the PRC and Islamic Jihad. Both groups are so-called muqawama, or rejectionist, terror groups, funded and backed by Iran, and oppose what they see as Hamas’ “pragmatic” approach. They advocate a commitment to violent struggle against Israel.

“Hamas is in transformation, moving away from its old alliance with Iran and Syria, and attempting to align itself with Sunni states such as Egypt and Saudi Arabia,” said Ehud Yaari of the Washington Institute for Near East Policy. “Hamas has a vested interest in showing that it is capable of maintaining stability in Gaza.”

The decision to pursue Qaisi was driven by the IDF’s belief that he was in the process of planning a terrorist attack from the Sinai Peninsula, a swath of land measuring 23,000 square miles that is only nominally under Egyptian control. Qaisi already had succeeded in launching such an attack, last August, which left eight Israelis dead. The ensuing fighting along the border also claimed the lives of three Egyptian soldiers, prompting thousands to storm Israel’s embassy and souring relations between Jerusalem and Cairo.

Avoiding such an eventuality appears to be shared on the opposite side of the border. Egypt, where President Hosni Mubarak’s autocratic regime has been replaced with a parliament controlled by the Muslim Brotherhood — an Islamist organization with close ties to Hamas — might be compelled to react in the face of widespread civilian deaths in Gaza, Yaari said. But given the country’s relative instability and lack of clear leadership, all factions of the country’s government would like to avoid a Gaza crisis and a further deterioration in relations with Israel.

Egypt’s intelligence chief, Murad Muafi, is playing a major role as a liaison between Hamas and Israel to bring about a cease-fire in Gaza.

Israel’s ability to act narrowly in Gaza — avoiding the threat of an Egyptian retaliation while reducing the likelihood of high civilian casualties that would have generated intense pressure for a wide-scale assault — was enabled by the technological wizardry behind Iron Dome, a potential game-changer in Israel’s continuing struggle against cross-border terrorism even if it leaves the region’s underlying dynamics unchanged.

The technology, first deployed in southern Israel in March 2011, is capable of downing rockets with a range of between 2.5 and 43 miles. In the latest round of clashes, it has intercepted over 90 percent of incoming rockets, according to the Jerusalem Post, up from 75 percent a year ago. So far, only one civilian in Israel has been seriously wounded — a 40-year-old foreign worker from Thailand who was hit by shrapnel.

The much-reduced risks of civilian casualties on the Israeli side protects the political leadership from pressure to undertake a full-scale assault on Gaza, as happened during Operation Cast Lead, the 22-day military incursion into the Hamas-controlled Gaza Strip that began in December 2008 and left 1,166 Palestinians and 13 Israelis dead.

“Under the circumstances,” said Yoram Schweitzer, a terrorism expert at the Institute for National Security Studies, “when the chance arose to take out Qaisi, we took advantage of it.”