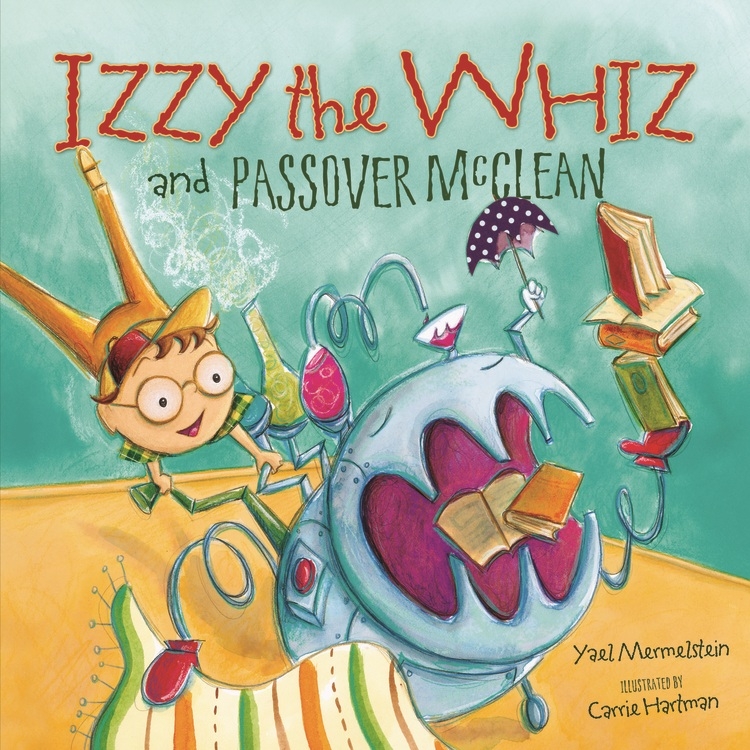 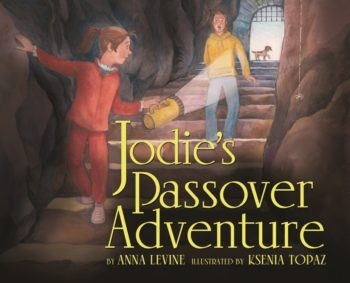 In “Jodie’s Passover Adventure,” Jodie and her American cousin Zach discover ancient secrets on their exploration of Hezekiah’s Tunnel in the Old City of Jerusalem. (Courtesy Kar-Ben Publishing)

BOSTON (JTA) — A vacuum-like robot that cleans the house and a spunky Israeli girl on an underground adventure in Jerusalem are among the characters featured in new children’s books for Passover.

This year’s crop offers more than the typical retellings of the Exodus story. Two books have Passover as a backdrop for entertaining and imaginative storytelling that can spark conversation about the popular holiday’s many rituals and traditions. One retells an Afghani folk tale that gives families a chance to discover Jewish life in an unfamiliar part of the world. A lift-the-flap format book is aimed at the younger crowd.

Here’ a look at this year’s Passover book offerings for kids:

In this delightful rhyming tale, Izzy invents a cleaning machine to help his mother in the ritual house cleaning before the start of Passover. Mom takes a rest and leaves Izzy in charge. Think Dr. Seuss meets robot vacuum cleaner: “Izzy pressed the red button, McClean lurched and whirred, He cranked the green handle, it belched and it purred. The hungry machine chomped ten books for its lunch. Gobbled the rug, and continued to munch.”

Trouble of the “Cat in the Hat”-type follows, of course, but all is neatly tidied up before the start of the seder. Hartman’s cartoon-like illustrations are playful and lively — a perfect fit for the zany fun of this entertaining book.

Award-winning author Anna Levine and artist Ksenia Topazas, paired for the second time, bring ancient Jewish history alive in an adventure tale story featuring Jodie, a spunky Israeli girl who dreams of being an archeologist like her father. Jodie invites her visiting American cousin Zach, along with her older brothers, for an underground exploration of Hezekiah’s Tunnel, the famous secret water passage in Jerusalem’s Old City. There are secrets to discover about how the tunnel was dug in ancient times, along with spooky shadows and a treasure. After the adventure, the family enjoys a Passover picnic in an outdoor park.

This folklore set in an Old World town (at times Poland, at times Russia) explores the Lippa and Galinsky families, who shared their lives and celebrated holidays together before the parents have a foolish argument over geese and hens. The families stop talking and even board the door between their two houses, using side doors to avoid seeing each other. But Rachel Galinsky and David Lippa are in love and plot a scheme, along with the village rabbi, to end the feud and bring the village together for the Passover seder. When it’s time to open the door to welcome Elijah, the hope of the prophet’s presence helps heal the bitter and angry hearts of the parents. Alexi Natchev’s beautifully colored block prints evoke an Old World feel but also are playful and filled with expressive detail and movement.

While “The Wooden Sword” does not have explicit references to Passover, the picture book of an Afghani folk tale includes a character who disguises himself in a visit to a family — a theme reminiscent of Elijah the Prophet stories often told at Passover. The tale is one that was part of Jewish life in Afghanistan for more than a thousand years, according to Ann Redisch Stampler, who won a National Jewish Book award for her retelling of the Yiddish folktale “The Rooster Prince of Breslov.”

In “The Wooden Sword,” an Afghani shah slips out of his palace late one night disguised as a servant. He is welcomed into the home of a young shoemaker and his wife celebrating the Sabbath. The shah wonders how such poor people could be so happy. The shoemaker tells his mysterious visitor he has faith in God that life will turn out as it should be. Despite a series of edicts issued by the shah to test the man’s faith, the shoemaker remains content in his belief in God. The poor but wise shoemaker eventually who teaches the shah about faith and persistence.

Carol Liddiment’s paintings portray what Afghani village life might have looked like with colorfully embellished clothing, floor pillows for sitting on during meals, men in turbans and the wife wearing a headscarf. In an author’s note, Stampler explains how she came to this Jewish retelling of the Afghani version of the story. The book sparks opportunities for discussion about Afghanistan as well as conversation about the diversity of Jewish life around the world.

A fun lift-the-flap book introduces young children to the customs and foods of Passover with easily understandable explanations and large, brightly colored, cartoon-like illustrations. “I am a mixture of apples, nuts, and a little wine. I am tasty and sweet,” reads the opening left-hand page. A bowlful of red apples and nuts is the clue.

Lift the “What am I?” flap on the right, and kids will be surprised by a young boy and his grandmother making charoset, reminding everyone of mortar used to build the pyramids. Other pages reveal other seder plate symbols, holiday candles, a Haggadah and a kids’ favorite, leaping frogs, to explain the Ten Plagues.