How Earth Day founder impacted the environment in Israel 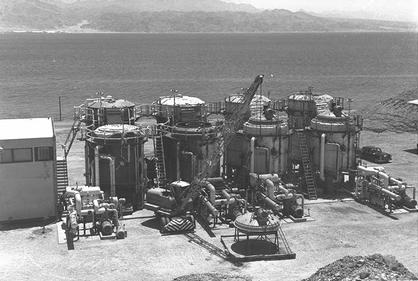 Desalination is a serious matter in drought-prone Israel; without it, there wouldn’t be enough water for irrigation or drinking.

The first desalting plant was piloted in early 1948 by the Weizmann Institute.

After a significant delay and collaboration between U.S. business partners and engineers, the first commercial desalination plant opened in Eilat in 1964, using methods pioneered by Alexander Zarchin.

The desalting grant was advocated in the Senate by Sen. Gaylord Nelson, Wisconsin Democrat. It was initiated in the House with joint Democratic-Republican sponsorship. The sum originally requested was $40 million over a five year period. This was reduced to half and will be made available this year for immediate use. The concept behind the desalting grant was that Israeli expertise would he made available to other nations with similar problems involving water.

Today, the efficacy of desalination plants and their environmental impact is being reconsidered.  A new desalination plant in Ashdod, announced in December 2011, aims to be one of five to supply 85% of Israel’s household drinking water.  The issue was recently explored in Ha’aretz:

Prof. Nurit Kliot, one of the members of the ministry’s climate change steering committee, said that the committee did not specify desalination systems as a preferred policy move. "These systems produce large amounts of water, but their benefits do not justify their high costs – including the environmental costs, which nowadays aren’t taken into consideration," Kliot said.

While she failed to specify the costs, it is assumed that Kliot was referring to the fact the systems occupy much coastal space, use a lot of energy and emit to the sea huge concentrates of salt and chemicals used during the desalination process.

IMAGE: View of the Zarchin desalination plant on the Red Sea in Eilat (30 April 1964. Moshe Pridan, Israel GPO
—
For more on this topic, visit http://archive.jta.org and enter the following search query: desalination OR desalting