Seeking Kin: An IDF unit helps answer the cry, ‘Where is my son?’ 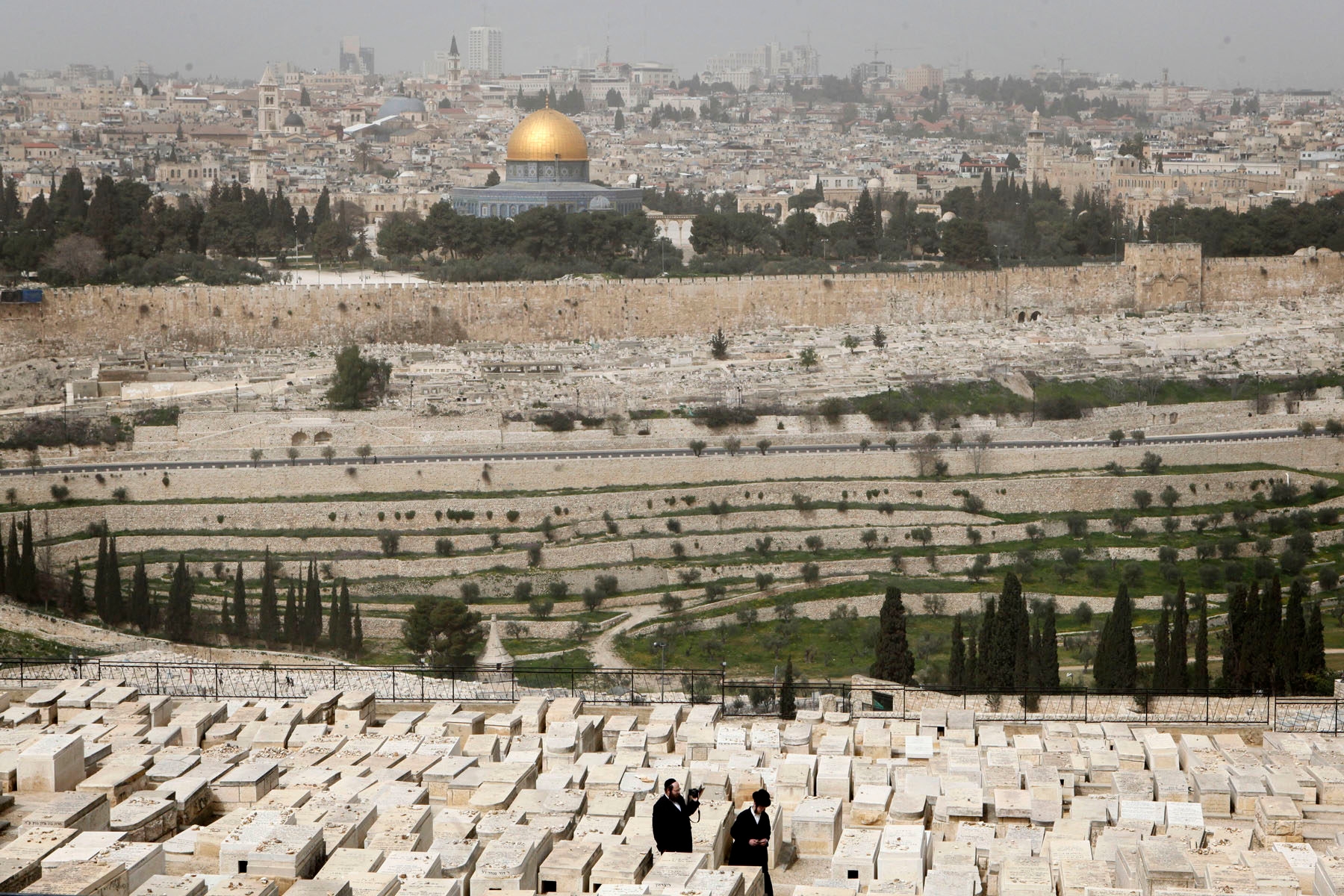 Mordechai Levy disappeared in 1948, and it wasnâ€™t until 64 years later that his resting place was identified on Jerusalemâ€™s Mount of Olives, pictured here. (Uri Lenz/FLASH90 )
Advertisement 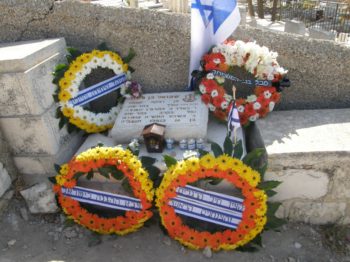 This Israel Defense Forces gravestone was dedicated two years ago, shortly after the resting place of Shmuel Ben-Bassat — killed in 1948 — was at last located on Jerusalem’s Mount of Olives. (Courtesy of Itzik Ben-Dov)

BALTIMORE (JTA) — On Jan. 3, 1948, Mordechai Levy, a resident of the Jewish Quarter in Jerusalem’s Old City, disappeared. The 17-year-old’s parents, David and Yaffa, alerted British mandatory authorities and checked local hospitals, the chevra kadisha (burial society) and the Jewish Agency. They contacted the media. In 1950, the despairing mother wrote a letter to the prime minister under the poignant heading “Where is my son?”

“Except for a pledge to broadcast the information on the radio and in newspapers, I have [gotten nowhere],” Yaffa Levy complained to the man she addressed as “The Honorable Mr. Ben-Gurion.”

“I cannot be silent until I know whether my son is alive or dead,” she continued. “Since I have not found an attentive ear, I am turning to you to take an active interest in this case.”

The same day that Levy vanished, a British official discovered the body of someone who had been killed in Jerusalem’s Mamilla neighborhood. The dead man carried no identification, but his pants pockets contained a Jewish calendar. His corpse was transported to a hospital in the Russian Compound, then to another hospital, where someone summoned the Sephardic branch of the chevra kadisha. The burial society buried the body in the ancient Jewish cemetery on the Mount of Olives.

At the time, a policeman showed people around Jerusalem a photograph of the deceased. No one recognized him.

Sixty-four years after the fact, the body was determined to be Levy’s. The identification was made just recently by Itzik Ben-Dov while on reserve duty with the Israel Defense Forces’ Branch for Locating Those Missing in Action.

The branch was launched approximately 20 years ago to ascertain the resting places of Israeli soldiers known to have been killed in action. Most of the 181 still-unresolved cases date back to the period surrounding Israel’s War of Independence, the earliest being those of Menachem Chonan and Mordechai Kelman, killed on Dec. 11, 1947, at Mishmar Hanegev. The most recent unaccounted-for fatality was Eran Garbieh, whose Dolphin helicopter crashed into the Mediterranean Sea during a nighttime training exercise on Sept. 16, 1996. Six additional Israeli soldiers — Zecharia Baumel, Yehuda Katz, Zvi Feldman, Ron Arad, Guy Hever and Majdi Chalabi — are missing but officially presumed alive.

Levy, though, was not a soldier in 1948. He worked in a Jaffa Road flower shop owned by a Mr. Yarkoni. Ben-Dov stumbled upon and eventually solved the Levy mystery while investigating military cases and encountering Mount of Olives burial plots marked by stones reading “UNKNOWN.”

To Ben-Dov, Levy’s civilian status did not render his case outside the investigative purview. Especially in the period following the 1947 United Nations vote to partition Palestine into Jewish and Arab states, he says, Jews frequently were attacked by Arabs, particularly in such mixed cities as Jerusalem and Jaffa.

“It was a dangerous time and place,” Ben-Dov, a software engineer, says by telephone from his home in Lapid in the center of the country. “Levy was not the only [civilian victim]. There were shootings all the time. The line separating soldiers and civilians wasn’t so clear. Bus drivers also were shot. To drive on the roads also was dangerous.”

The point continues to resonate. Israelis have long believed that the IDF is the ultimate citizen-military. In a country so minuscule and enveloped by enemies, and with a small standing army, everyone walks on the front line — soldiers and civilians alike – and family sorrow lurks but one degree of separation away, if that. It is no wonder that the name of the annual commemoration of war dead – “Yom Hazikaron l’Chalalei Ma’arachot Israel u’l’nifga’ei Peulot Ha’evah,” or Memorial Day for Fallen Soldiers and for Victims of Terrorist Acts — binds together Israelis targeted regardless of whether or not they are wearing military uniforms.

With Yom Hazikaron on Wednesday, Ben-Dov hopes that “Seeking Kin” readers can help lead him to Levy’s older sister, Margalit, now approximately 83 years old; his two younger brothers, whose names he does not know; and nieces and nephews. Having solved the riddle of who lies in the Mount of Olives grave, Ben-Dov wants to alert the Levy family to the location so they can erect a proper gravestone.

Ben-Dov remembers feeling uplifted at the last reunification he facilitated and attended. The missing soldier was 20-year-old Shmuel Ben-Bassat of Har-Tov, a moshav near Beit Shemesh. Ben-Bassat was shot at home during a battle on Jan. 13, 1948. He was taken to a clinic. His sister, Rachel, 8, stood atop a rock outside peering in the window, hoping against hope. But the treatment was in vain and Shmuel died.

Fearing that the moshav would fall, Ben-Bassat’s parents, Menachem and Rivka, ordered that he be buried instead on the Mount of Olives. No relatives could attend because of the dangerous conditions there, too.

The Mount of Olives was captured by the Jordanians and remained off limits to Israelis until after the Jewish state’s victory 19 years later in the Six-Day War. Many families who then flocked to the cemetery could finally visit their loved ones’ graves. The Ben-Bassats were told that Shmuel’s burial spot likely had been paved over by Jordan, and they gave up their search.

Shmuel’s cousin Yehuda Ben-Bassat pressed on, however, determined to locate the remains. Ben-Dov was assigned the case. He consulted old documents and notebooks that had just been acquired by the chevra kadisha and the Jerusalem municipality. Ben-Dov learned that Shmuel Ben-Bassat had been buried near a wall and close to the grave of a woman named Dvora Machani. That information helped him plot precisely where Ben-Bassat’s body lay.

“We, your friends and relatives, stand here today at this emotional time at your grave, upon which rests the recently placed stone,” Osovsky intoned. “Finally we merited to reach this moment, after 62 years. Now we know where you are. A circle has been closed. It’s impossible not to think of Mom and Dad, who, sadly, did not make it to this point.”

Ben-Dov joined them at the memorial. Asked how he felt that day, considering his crucial role, Ben-Dov said on Sunday, “It was very emotional. People live in such sorrow all those years, and I can bring them information that’s so important to them. Now they can visit a grave, say Kaddish and hold a memorial.”

That is a goal that motivates Ben-Dov’s search for Mordechai Levy’s survivors, too. From city documents, Ben-Dov knows that soon after Mordechai’s disappearance, David Levy was captured during the battle for Jerusalem, held captive in Jordan, released after the war and died a year later. The Levys by then had moved to the capital’s Katamon neighborhood. Another document stated that Mordechai had a friend named Avraham Yalti.

“I’m looking to find Mordechai Levy’s family,” said Ben-Dov, who during Passover discussed the search on the Israeli radio program “Kol Shishi.” “Maybe they’d like to erect a monument. It’s a great story when we can identify a grave and the family can attend a ceremony there.”

More broadly, Ben-Dov would like to reduce the number of 181 names that appear in the Mount Herzl military cemetery memorial section that honors missing soldiers. In a lovely echo of the Bible, the IDF pays tribute to them there every year on the seventh of Adar, the date of the death of Moses, whose grave also is unknown. The website of the IDF’s Branch for Locating Those Missing in Action solicits visitors’ assistance in resolving the whereabouts of the soldiers’ bodies.

“The IDF feels a traditional obligation of the highest order to assure that all soldiers whose place of burial is unknown will come to be buried in Israel,” the website states. “In the course of such efforts, we request the public’s aid. … If you possess any information whatsoever regarding the fate of one or more such soldiers, please supply us with as much detail as you have available.”

Please email Hillel Kuttler at seekingkin@jta.org if you know the whereabouts of Mordechai Levy’s sister or other relatives. If you would like the help of “Seeking Kin” in searching for long-lost relatives and friends, please include the principal facts and your contact information in a brief (one-paragraph) email.