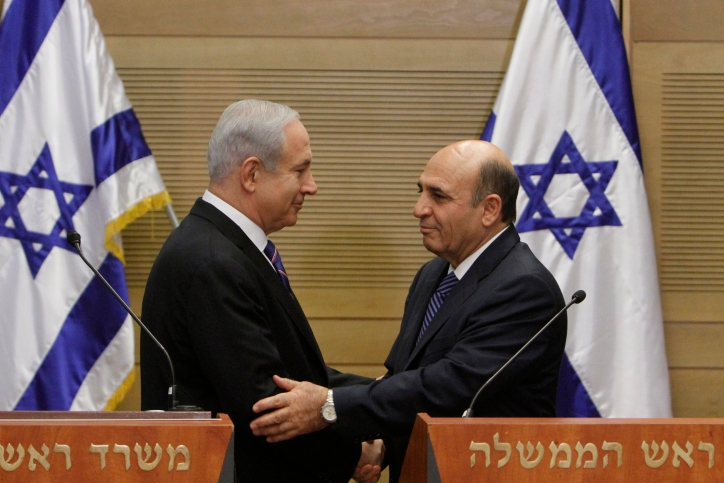 JERUSALEM (JTA) — Israelis went to sleep Monday night expecting early elections in September for the 19th Knesset. They woke up to the news that elections would take place as planned in October 2013.

According to the surprise agreement finalized early Tuesday morning, right before a plenum vote to disperse the Knesset ahead of early elections, Mofaz’s Kadima Party will join Netanyahu’s government coalition, boosting its numbers from 66 of the 120 Knesset members to an unprecedented 94.

Mofaz agreed not to attempt to topple the government until the official end of its term. In exchange he will be appointed vice premier. Mofaz also will participate in the meetings of the select ministerial security Cabinet.

The Kadima chief, who had vowed on his Facebook page that he would never join Netanyahu’s “bad” government and publicly called Netanyahu a “liar,” may have had a change of heart in part after seeing polls that predicted his party was headed for a major crash in early elections.

Kadima, which managed to garner a plurality of votes in the last elections with 28 Knesset seats, had fallen to fewer than half that number, according to recent polls.

Netanyahu, who in recent months has said repeatedly in public statements that he preferred not to initiate early elections, may have been tempted by the chance to bring back former Likud politicians such as Ronnie Bar-On, Tzahi Hanegbi and Meir Sheetrit, who defected with Ariel Sharon in 2005 to form Kadima.

” ‘Repatriating’ these MKs so to speak would serve two purposes,” said Amotz Asa-El, a Hartman Institute fellow. “It would strengthen the Likud. But it would also dilute the influence of more right-wing elements in the Likud aligned with Moshe Feiglin.”

The formation of a national unity government may also have positive diplomatic ramifications with regard to Iran’s nuclear program.

“A stable government strengthens Israel’s deterrence capabilities vis-a-vis Iran and improves its ability to put pressure on the U.N. Security Council and on Germany not to compromise too much with Tehran,” wrote Ron Ben Yisai, Ynet’s military affairs commentator. “The deal also improves the government’s ability to carry out surprise moves, which also strengthens deterrence.”

Netanyahu and Mofaz said during a news conference Tuesday before the signing of the coalition agreement that there were four central issues that would be advanced by the national unity government: legislation that will obligate haredi Orthodox yeshiva students to perform military or national service; amendments to the electoral process; passage of a two-year fiscal budget; and advancing “responsible” peace negotiations with the Palestinians.

The Supreme Court ruled in February that the Tal Law contradicted the principle of equality by giving the haredim preferential treatment and therefore was illegal. The court set Aug. 1 as the deadline to replace the Tal Law with alternative legislation.

Netanyahu noted during the news conference that disputes among key members of his coalition — the haredi Shas and United Torah Judaism parties and the stridently secular Yisrael Beiteinu — were a main factor in his original decision to call early elections. But with Kadima as a coalition partner, Shas and United Torah Judaism will be unable to topple the government over the Tal Law.

Incorporating Kadima also will enable the government to enact electoral system reform aimed at fostering political stability. Attempts to pass such reforms have failed due to the fervent opposition of smaller parties that represent specific populations such as the religious and haredim. These parties stand to lose from measures such as raising the election threshold from the present level of 2 percent or instituting regional elections for some of the Knesset seats.

Governments comprised of many diverse factions often are plagued with chronic divisions and instability. In many cases, a single party can threaten to bring down a narrow coalition government, giving it inordinate leveraging power.

Kadima’s support also may make it easier for the government to fend off demands by smaller parties that could hurt fiscal discipline during the passage of a two-year fiscal budget for 2013-14.

But the timing of parliamentary discussions on the budget will coincide with the expected rerun of last summer’s socioeconomic protests.

“With the world economy going into a slowdown, our government will have to make painful fiscal cuts and it will have to accomplish this at a time when the Israeli version of Occupy Wall Street is going on,” said Aviv Bushinsky, a former spokesman and chief of staff under Netanyahu. “Kadima might even be compelled to join the populists in calling for more spending.”

Settlement policy might be another point of disagreement between Kadima and Likud. Israel’s Supreme Court ruled Monday that the government had to go ahead with the demolition of 30 homes that were built on Palestinian-owned land in the Beit El settlement’s Ulpana neighborhood.

Although Netanyahu has been noncommittal, right-wing politicians in his coalition, including several Likud MKs, want to legalize retroactively neighborhoods and outposts like Ulpana.

Netanyahu could be torn between his obligation to Kadima MKs who oppose such legislative initiatives and his more right-wing coalition partners.

The peace process may lead to some points of contention, but opponents have refrained from placing the blame on Netanyahu’s government for the lack of progress in negotiations.