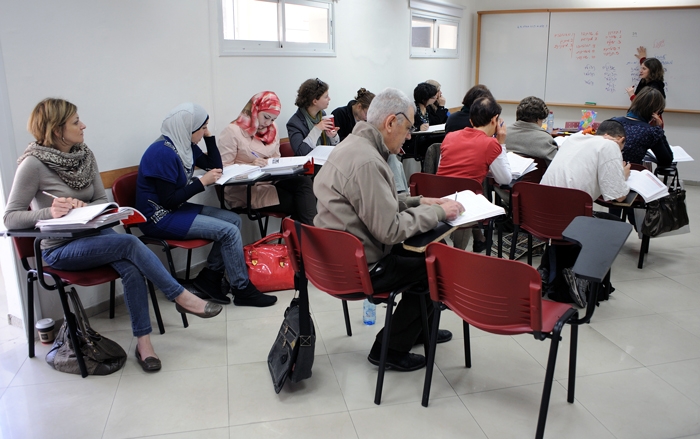 That’s why he is enrolled in an ulpan, an intensive Hebrew language program that has been a rite of passage for Jewish immigrants since the state’s founding.

“I needed to learn Hebrew. Everyone speaks Hebrew,” the 22-year-old college graduate said during a class break at Milah, as he stood with several other Arabs and Jews on a second-floor balcony overlooking a trash-filled alley off the city’s Ben Yehuda Street.

Milah, which means “word” in Hebrew, differs greatly from the ulpans — which today number more than 90 — that have educated millions of new immigrants and visiting Jewish students from abroad.

Founded in 1994 with funds from the Morrison family of Birmingham, Ala., Milah enrolls about 500 students a year. Since 2000, the number of Muslims has soared from 5 percent to 50 percent today.

The school also has attracted visiting Korean students, Spanish preachers and Italian nuns. Its Jewish students, too, are diverse in their background. One classroom alone has Jewish students from Canada, Ethiopia, France and Russia.

So it’s no surprise that the word “coexistence,” written in English with a crescent, cross and a Magen David, along with its Hebrew equivalent, casually crops up in the first few lessons of most class levels.

It’s all made Milah a friendly meeting ground. Neiroukh admits that he is surprised by how many Jewish friends he has at Milah.

“They help me all the time,” he said.

“My vision was a place that students from all over the world and any walk of life — all religions, cultures, languages — where people could study Hebrew,” she said on a recent Sunday afternoon while sitting in her tidy office. “It will be an island of peace, and that’s what it is.”

To accommodate its growth in Arab students, the school offers four Arab-only classes, and this year it hired its first Arab office employee: Afaf Ibrahim, 38, a registered nurse and a single mother from eastern Jerusalem.

Motivated by the licensing exams she was required to take in Hebrew for her Israeli nursing license, she was first a student at Milah.

“The Israel government said that you need to do the test in Hebrew,” she said, dressed in a hijab, the hair covering of religious Muslim women. “I was [also] embarrassed that I couldn’t speak or write Hebrew. The government sends us letters and we weren’t able to explain what was in the letters, and we needed to find someone who could speak Hebrew.”

Ibrahim since has begun a love affair with the Hebrew language, completing most of the courses available at the ulpan.

For Gerassi-Tishby, the increase in Arab students is a direct result of the country’s changed security situation in recent years.

“Until the second intifada, the [Arabs from eastern Jerusalem] didn’t need to study Hebrew,” she said, as they typically worked in Arab communities in the West Bank. “[Now] it’s really hard to get into Jericho and Ramallah. It’s really hard to work outside of Jerusalem. … Because of the borders and walls, movement became much harder.”

The ulpan’s collegial atmosphere, she adds, stems from the students’ professionalism and commitment. Most Arab students are university graduates, including lawyers and doctors studying for licensing exams.

“They want to find work,” Gerassi-Tishby said. “Sometimes [they say] if we go shopping or to restaurants. Sometimes they say it’s important to be a part of the country, but that’s rare.”

Some are like Rouia Jabar Assal, an accountant and mother of four whose blue blouse was color coordinated with her blue hijab. She says she always wanted to learn Hebrew.

“If I go to the mall, everything is in Hebrew,” she explained. “Now I can read papers and call Israeli companies.”

Sadie Lynn, who is from Arizona, says she was looking forward to talking to the Muslim women in her class.

“I want to compare notes on what it’s like being a religious woman in either culture,” Lynn said, adding that she was not sure how to broach the conversation. “I don’t know if it’s just social anxiety or some real or imagined taboo.”

Not all the Muslim women students appear to be traditional in their observance. Aseel Yassin, 24, an eastern Jerusalem pharmacist whose streaked blond hair and tight jeans belied a more liberal religious outlook, says her study of Hebrew has helped her better understand Jews.

“As you learn the language, you don’t see things in the perspective you [once] saw them,” she said.

She and other Muslim students are largely using pro-Israel educational material common in ulpans.

“I have to be aware that their stories and histories are different from ours,” said Avishag Rozenberg, 37, a teacher at the ulpan. “When the text is very Zionistic, I don’t stress it.”

Asked if the program’s rise in Muslim students could help nudge along the peace agreement, Gerassi-Tishby laughs.

“I hope so, but I’m not so naive,” she said. “Hopefully there will be better coexistence. That’s my vision and hope. … Maybe it’s a good sign. Life is stronger than politicians.”