Spurred by a Shas lawmaker, abortion politics arrives in Israel 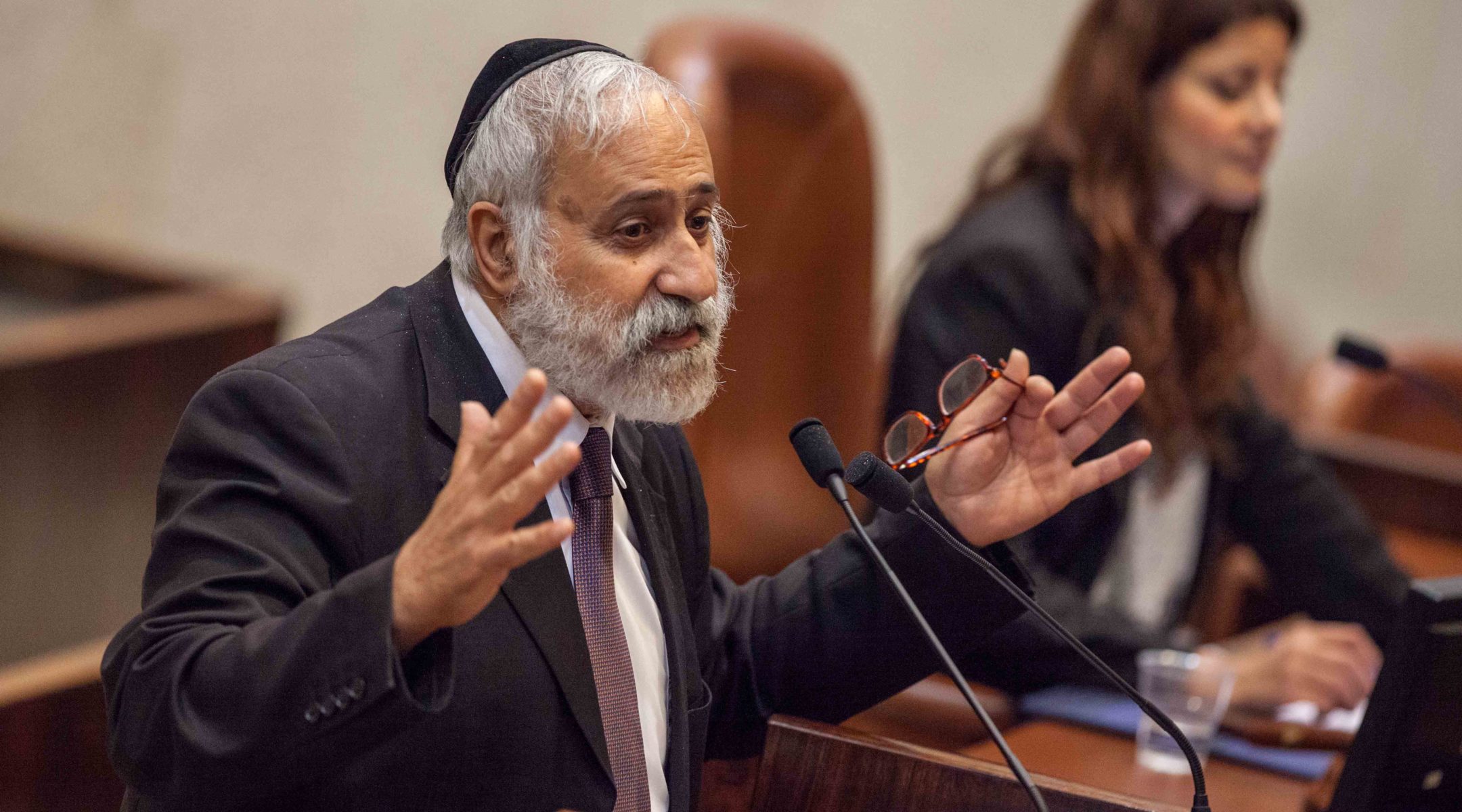 Shas lawmaker Nissim Zeev, shown during a plenum session in the Israeli Knesset on June 11, 2012, is demanding a public debate on abortion, which he has said publicly is akin to "murder." ( (Uri Lenz/FLASH90)
Advertisement

JERUSALEM (JTA) — Israel’s paradoxical approach to abortion — the procedure is illegal unless approved by a committee, which gives the go-ahead to 98 percent of the requests — could radically change if a Knesset member has his way.

Nissim Zeev of the Sephardi Orthodox party Shas, who has said publicly that abortion is akin to “murder,” wants to make the procedure illegal after the 22nd week of pregnancy unless the pregnancy poses a danger to the mother’s health or the fetus suffers from severe defects and is unlike to survive.

“This has nothing to do with women’s rights,” Zeev heatedly told JTA. “I demand that we have a public debate on this campaign of murder.”

Political observers don’t think his measure will progress far, but Zeev has shined a spotlight on an issue that has never figured even vaguely in the country’s political campaigns. In fact, Israel does not even have an active anti-abortion movement.

Still, many rabbis, especially haredi Orthodox, believe that the messianic redemption will be delayed until all souls are born. As a general rule, Jewish law allows abortion in the first 40 days of pregnancy and in cases where the life of the mother is in mortal danger.

“This is about the last thing we need right now — another conflict between the religious and the secular,” said one Knesset member from the coalition, speaking on the condition of anonymity. “We have enough political issues to deal with. Zeev has to understand that if it ain’t broke, it don’t need to be fixed.”

As a result, the legislator said, the proposal has been purposely buried in committee. Still, in Israel’s unpredictable political landscape, its existence on the dockets could bring it to the fore without warning.

It’s quite a contrast to the United States, where since the 1973 Roe v. Wade case legalizing abortion, the topic has been a heated political and social issue. The lack of controversy in Israel stems mostly from the large gap between law and practical reality.

The Israeli penal code states that termination of pregnancy is a crime that carries a prison sentence of up to five years. But the code also broadly addresses numerous circumstances in which an abortion may be legally performed, including benefit to emotional and financial well-being.

The procedure must be approved by a special committee with at least two physicians and one licensed social worker; at least one of the three must be a woman.

Yet approval is practically automatic if the pregnant woman is younger than 17 or older than 40; if the conception was a result of rape, incest or extramarital relations; if the pregnancy is likely to endanger the mother’s physical or mental well-being; or if the fetus has been diagnosed with a possible birth defect.

Both Zeev and feminist organizations such as the Israel Women’s Network confirm that the committees approve 98 percent of requested abortions.

Less than 10 percent of abortions in Israel are carried out after the 22nd week and some 20,000 legal abortions are performed in public hospitals every year in Israel, according to the Knesset research department. This does not include abortions performed because of concern for the mother’s physical health, which especially if there is any medical emergency are often not even brought before the committee.

It is unknown how many women avoid the committee — whether because they are between 17 and 40, or because of personal preference — and turn to a private doctor. Having an abortion is not a criminal offense and, according to binding legal norms, unless medical malpractice is involved, the physician performing the abortion will not be prosecuted. Private abortions cost $1,500 to $1,750.

Finally, making it impossible to know how many of the procedures are performed in total is that they can be listed as “medical interventions,” which can cover a broad category.

With all that in mind, most Israeli feminists and others favoring the availability of the option have been hesitant to challenge the status quo. But Zeev’s proposal may force their hand, acknowledges Tal Tamir, the director general of Women in their Bodies, a feminist health organization.

The huge gap between the law’s paradoxical contradictions and practical life, she explains, reflect an attempt by Israeli society to live with all its internal tensions.

“On the one hand, some parts of Israeli society are very liberal, while other parts are very conservative,” Tamir told JTA. “By making abortion illegal, the patriarchy maintains its hold over women’s bodies, but by making it available, it maintains a progressive, liberal facade.”

Indeed, there is a widely, liberal, even permissive attitude toward sexual activity in much of the Israeli secular culture. Secular schools provide coed sex education. The Israeli health plans don’t offer free birth control, but some high schools provide condoms through vending machines.

Further, the army provides at least one free abortion to every female soldier who requests one. While there is no civil marriage in Israel, civil law recognizes common-law marriage and cohabitation is commonly accepted.

Tamir says the prohibition on abortions for women aged 17 to 40 is another example of conflicting social pressures.

“Israel is a very pro-natal society and carries a strong message that Jewish women should bear children, especially after the Holocaust,” she said. “We have the highest rate of IVF services — all paid for by the state — in the world. So women who are the ‘proper age to have children’ aren’t supposed to have abortions. But Israeli society also wants perfect children, so if there are defects, the abortion is considered OK.”

“Women who have the money go to private clinics. Underprivileged women are forced to go to a committee and plead their case,” she said. “And it really galls me that the state has the right to intervene in our bodies.

But, she says, “In the current political constellation, in which religious parties carry disproportionate weight, the situation could always be worse for women.”

Unlike Tamir, Knesset member Zehava Galon of the Meretz party is determined to change the status quo. Last fall, she submitted a proposal to permit abortions for all women at any time, but the proposal failed to make it out of preliminary committees.

She insists, however, that she will continue to bring it to the Knesset for debate.

“The attempts by Zeev to interfere with women’s choice is making this even more urgent,” she told JTA. “It is simply not right that in a proper, democratic country a governmental committee can deny a woman her basic right to decide what to do with her own body.”