Those anti-Semites, they would do anything to spread their Jew-hating agenda.

And we should be afraid, because their latest (and in my opinion, most efficient) tool is delivering their propaganda while in a giant, innocent-looking animal costume. The beloved Elmo of “Sesame Street” wasn’t the first one to do it. Before Elmo, between the years 2007-2010, several television characters taught children how cute and cuddly the world will be without the Jews.

Spread it fast, before Cookie Monster gets infected (God help us all).

Catchphrase:  “You and I are laying the foundation for a world led by Islamists”

Fate: Killed by an Israeli interrogator in episode 105 (watch the dramatic death scene)

Kinda looks like: A bee with a Lego Man face

Family ties: Farfour’s cousin. Hey, if bees and mice can do it, maybe there’s hope for us.

Catchphrase:  “”We will liberate Al-Aqsa from the filth of the criminal Jews”

Characteristics: He can fly and apparently can be really mean to lions and cats (difficult to watch).

Fate: Died from a mysterious disease in Egypt.  (watch his arrival to the show): 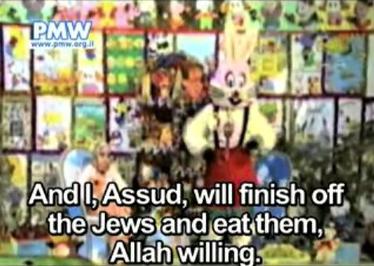 Kinda looks like: The love child of Roger Rabbit and the Energizer Bunny.

Catchphrase: “A rabbit is a term for a bad person and coward. And I, Assoud, will finish off the Jews and eat them.”

Fate: died in a Gaza hospital after being injured in an Israeli attack.

Kinda looks like: A cross between Yogi Bear and Rudolph the Red Nosed Reindeer (minus the red nose).

Catchphrase:  “I will join the ranks of the Izz A-Din Al-Qassam Brigades”

Characteristics: Besides having a goal in life, Nassur is also fluent in Hebrew

Fate: Uncertain, since the show went off the air. My guess, probably something involving the Israelis.

Catchphrase: Mr. Sa’d doesn’t really say much, he just hangs out and eats carrots (he could use some exercise).

Characteristics: Fat, lazy, and appears to be scaring the kid sitting next to him.

Videos are courtesy of Mamri and PMW