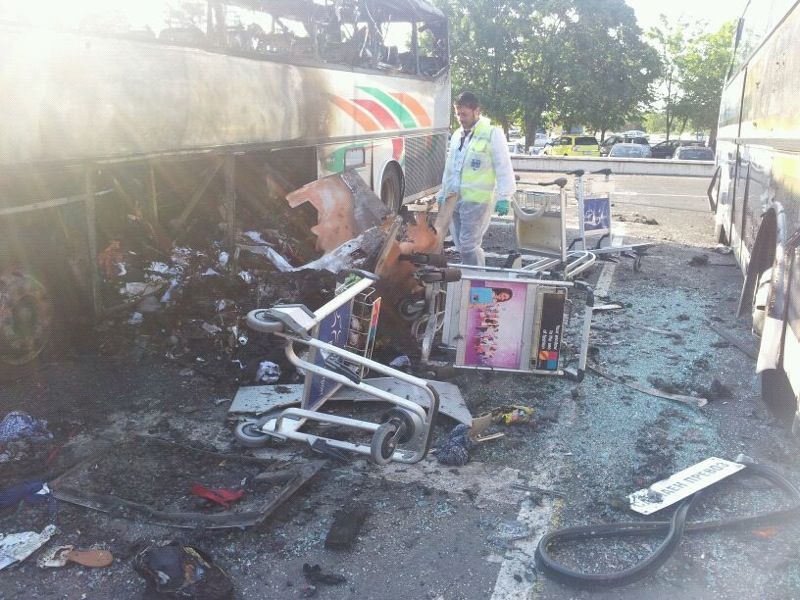 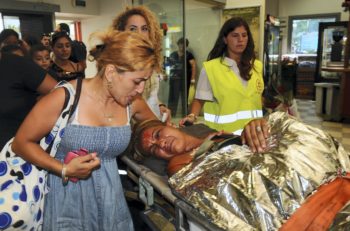 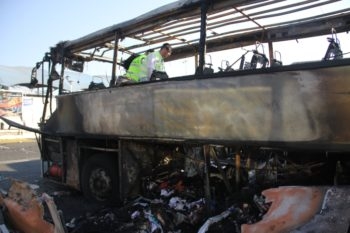 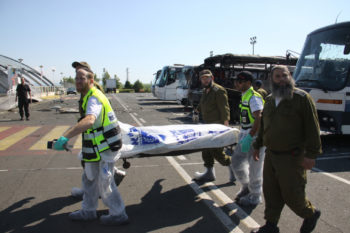 TEL AVIV (JTA) — Vered Kuza was standing with her daughter, Amit, on an airport shuttle bus at Sarafovo International Airport in Burgas, Bulgaria, when she suddenly heard a blast.

She pushed her daughter through the door just as the bus exploded. Kuza was knocked unconscious. Her daughter landed on the ground, debris ripping into her left shoulder, through her chest and down to her liver.

When Vered Kuza regained consciousness, her feet “were swollen to a ridiculous size.” Her daughter was nowhere to be seen.

“Everything was broken,” Kuza told JTA, lying in a hospital bed in a Tel Aviv emergency room on Thursday, her feet wrapped in gauze and plastic and a red No. 2 scrawled on her forehead. “There were body parts around me. I didn’t know what was happening. It was smoking, hellish. It was horrifying.”

Five Israelis died in the attack that Kuza survived. According to Israeli reports, the five deceased are Amir Menashe, 27; Itzik Kolengi, 27; childhood friends Maor Harush, 26, and Elior Priess, 26; and Kochava Shriki, 44. In addition, the bus driver and suicide bomber died in the attack.

Ynet News reported that minutes before the attack, Shriki called her sister and told her that she was pregnant for the first time. Shriki’s husband, Yitzhak, survived and spent hours searching for his wife.

After the bomb exploded, “I walked toward the exit and called to my wife, ‘Come toward the door!'” he told Ynet. “After a few seconds I realized she wasn’t with me. The fog was thick like sand, and I went to look for her but it was impossible to get through.”

Kuza was one of 33 Israelis injured in the attack to be flown back to Israel’s Ben-Gurion Airport on Thursday afternoon and sent to hospitals throughout the country, according to the Israel Defense Forces. Her daughter was one of three Israelis who were too seriously injured to make the trip and remained hospitalized in Bulgaria.

The head of the IDF Medical Corps, Itzik Kreis, said that the injured passengers who arrived in Israel “got very good medical care in Bulgaria” and “were less seriously hurt than we expected.”

The IDF Medical Corps landed in Bulgaria on Wednesday night to tend to the victims and bring them back to Israel. Kreis said that the injuries the corps saw were similar to those suffered by bus bombing victims in Israel.

A plane carrying 70 Israeli tourists in Bulgaria scheduled to fly home on Wednesday night was delayed, but arrived on Thursday.

Seven people died in the attack, which occurred Wednesday at about 5 p.m. The dead included five Israelis, the bus driver and the suicide bomber. Names of those killed were scheduled to be announced on Thursday night after their bodies arrived in Israel.

An airport security camera at the Sarafovo airport in Burgas revealed that the bomber was a Caucasian man with long hair and a backpack who had been wandering around the area for about an hour. He reportedly was carrying a fake Michigan driver’s license.

Israeli Prime Minister Benjamin Netanyahu quickly accused Iran of sponsoring the attack. In a statement on Thursday, Netanyahu called on “the world’s leading powers” to recognize “that Iran is the country that stands behind this terror campaign.  Iran must be exposed by the international community as the premiere terrorist-supporting state that it is.”

Israeli Foreign Minister Avigdor Lieberman said he had information that the attack was the joint work of the Lebanese terrorist organization Hezbollah and the Iranian Revolutionary Guard Corps, according to The Jerusalem Post.

Iran has denied the allegations.

Soon after the attack, Amit Kuza was taken by paramedics to a hospital in Sofia, Bulgaria’s capital. Her mother “sat on the side of the road,” unattended for two hours because she was deemed to be in stable condition, she said.

“I had no one to talk to,” Vered Kuza said. “I didn’t even have a glass of water. They don’t know English. It was primitive.”

Bulgarian officials told Kuza that her daughter was in Sofia and in a stable condition. But Kuza was not able to speak to her daughter until Thursday morning. Amit and the two others who had remained in Bulgaria were scheduled to arrive in Israel on Thursday evening.

When news of the attack reached Israel, Arik Kuza, Vered’s husband, called the Foreign Ministry to find out if his wife and daughter were alive.

“I called 50 times,” he said, standing at Vered’s bedside. “They put me on hold and I heard music. I waited for hours.”

Lying in her hospital bed, she spoke in a calm and even tone. With her daughter scheduled to arrive in a few hours, she said she felt lucky to be alive.